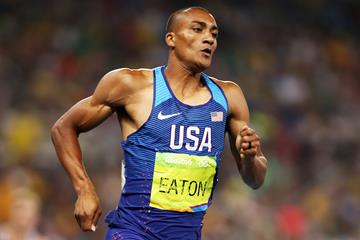 USA’s world record-holder Ashton Eaton ended day one of the Rio 2016 Olympic Games decathlon – part of the IAAF Combined Events Challenge – with a 121-point lead, looking on course to successfully defend his title.

The men’s combined events in Rio got off to the best possible start with the Olympic decathlon 100m best being broken.

It wasn’t Eaton who bettered the mark, though. The US all-rounder held the previous best at 10.35 set in London four years ago, but Canada’s Damian Warner took 0.05 off that mark when winning the fourth decathlon 100m heat in an Olympic decathlon best of 10.30.

In Gotzis earlier this year, Warner set a world decathlon 100m best of 10.15, so it wasn’t necessarily surprising to see that the world silver medallist finished 0.16 ahead of Eaton here. Nevertheless, the last time Eaton hasn’t led a combined events competition after the first event, indoors or out, was at the 2009 IAAF World Championships in Berlin.

Eaton now finds himself in the unusual position of having to make up ground in the second event, the long jump, where his outdoor season’s best is four centimetres shy of Warner’s.

USA’s Zach Ziemek finished third in the fastest decathlon 100m heat, clocking 10.71. But perhaps the most significant performance – in terms of the medal hunt – came from France’s Kevin Mayer. The 2014 European silver medallist clocked a big PB of 10.81 to boost his chances of contesting for a medal. Mayer was the only athlete in the entire round to set a PB.

Arthur Abele, Germany’s top hope of a medal, performed to par with a clocking of 10.87. Compatriot Rico Freimuth, the world bronze medallist, also got off to a solid start, running 10.73.

It’s not often that Eaton is put under pressure. If anyone was wondering how he copes in such situations, the US decathlete gave an emphatic answer in the long jump: with relative ease.

He opened with 7.90m and then went even farther with his next attempt, leaping 7.94m. Officials scrutinised the plasticine before raising the white flag to signal a valid jump.

With Warner leaping 7.67m, it meant that Eaton assumed the overall lead with 2030, 30 points ahead of his Canadian rival.

Germany’s Kai Kazmirek produced the second-best jump of the day with a PB of 7.69m, boosting his chances of challenging for a medal.

Mayer followed up his 100m PB with a season’s best of 7.60m in the long jump and is on pace to produce the best score of his life.

Abele’s medal ambitions suffered a big blow, though. The German recorded fouls with his opening two jumps and then landed at just 6.97m – 60 centimetres shy of the PB he set earlier this year – with his last attempt.

European champion Thomas van der Plaetsen jumped a season’s best of 7.66m to move up from 29th to 13th in the overall standings.

Eaton produced his best ever shot put mark at an outdoor global championships to extend his lead.

He opened with 14.72m and then improved to 14.73m with his second throw, bringing his overall tally to 2803. He ended the event 95 points ahead of Warner, who was some way below his best in the shot put and managed just 13.66m.

Mayer continued to produce the series of his life, sending his shout out to an outdoor PB of 15.76m, the best mark of the day, to move up to third overall, just nine points shy of Warner.

The biggest cheers of the contest came for Brazil’s Luiz Alberto de Araujo. His throw of 15.26m was one of the best marks of the day and moved him from eighth to fourth on the leaderboard. It is unlikely he will challenge for medals, though.

Kazmirek managed 14.20m, while Abele threw 15.03m after recording two fouls. Kazmirek ended the event in fifth, while Abele – usually a strong second-day performer – was down in 15th.

France’s Bastien Auzeil and Adam Sebastian Helcelet of the Czech Republic were the only other men to throw beyond 15 metres, putting 15.41m and 15.11m respectively. Bourrada slipped to seventh after throwing 13.78m in the shot, but was still in medal contention.

Although the decathlon was still in the early stages, there already appeared to be three likely medallists emerging in the form of Eaton, Warner and Mayer. The remaining seven events would decide the order, though.

Thirteen men produced better marks than him in the high jump, but Eaton managed to hold on to his overall lead in the decathlon.

Drawn in the same pool as Warner and Mayer, the leading trio opened with first-time clearances at 1.92m. Warner and Mayer maintained their clean cards up to and including 2.01m, while Eaton needed all three attempts to go over that height, sailing well clear on his last try to stay on course for the Olympic decathlon record.

Eaton wasn’t able to go any higher, while Mayer and Warner both got over 2.04m, reducing Eaton’s lead to just 68 points.

USA’s Jeremy Taiwo shot right up the leaderboard, going from ninth to third after clearing 2.19m, the best leap of the day. Van der Plaetsen jumped a season’s best of 2.16m to move up 11 places in the overall standings.

Kazmirek consolidated his fifth-place position by jumping 2.10m. Bourrada cleared the same height to top group B, equalling the PB he set seven years ago.

Eaton ended day one of the decathlon with a 121-point lead after producing the fastest time of the day in the 400m.

On a hot and sticky evening in Rio’s Olympic Stadium, Eaton dashed around a lap of the track to cross the line comfortably ahead of Kazmirek. Eaton’s time of 46.07 in the third heat was almost a second faster than his time from the 2012 Olympics and brought his day-one score to 4621.

Kazmirek equalled his PB from five years ago, clocking 46.75 to move from fifth to second overall with 4500. Warner clocked a solid 47.35 to remain in medal contention, bringing his half-way score to 4489.

But Mayer was once again one of few men to set a PB; the Frenchman clocked 48.28 to take 0.38 from his previous best set in 2011. He placed third in the second 400m heat behind De Araujo and Cuba’s Leonel Suarez, who duelled the whole way around. Much to the delight of the home crowd, De Araujo crossed the line first, clocking a PB of 48.14 to finish 0.01 ahead of Suarez.

Bourrada convincingly won the first 400m heat in 47.98, crossing the line about 10 metres in front of Helcelet and Van der Plaetsen. The latter pair clocked season’s bests of 49.51 and 49.63 respectively.

Looking ahead to the second day, Eaton can be expected to double his current leading margin in his quest for a second Olympic title. If Mayer continues to exceed expectations, he will not only smash his decathlon PB, but he also has a realistic shot of taking the silver medal.

Warner is still more than capable of securing the silver, though, and he can be expected to bank valuable points in the first event of day two, the 110m hurdles.

Behind Warner and Mayer, the likes of Kazmirek, Bourrada and Abele won’t be far from the medals if they have a good second day.