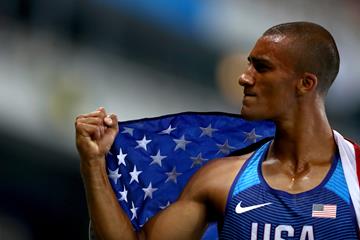 He was put under pressure at the start, at the end, and a few times in the middle of the competition. But ultimately Ashton Eaton showed exactly why he is the world’s greatest all-round athlete by successfully defending his Olympic decathlon title.

Less than 12 hours since contesting their last event of day one, the decathletes – some, understandably, looking a bit lethargic – were back on track for the 110m hurdles to kick off day two.

Most of the leading contenders were in the fourth and final heat, which went to form. Canada’s world silver medallist Damian Warner was 0.14 shy of his own world decathlon best, but still won comfortably with 13.58 to move up from third to second in the overall standings.

Overnight leader and defending champion Eaton clocked 13.80, his slowest time for five years but still good enough to keep him on track for the Olympic record.

But once again, as he had done throughout the first day, France’s Kevin Mayer exceeded expectations by clocking 14.02, his best ever performance within a decathlon and just 0.01 behind his lifetime best. It moved him up one place from fourth to third with some of his best events still to come.

Germany’s Kai Kazmirek, who was in second place overnight, dropped from second to fourth place overall after clocking 14.62.

Larbi Bourrada was the only athlete to set a PB, the Algerian clocking 14.15 to move up one place on the leaderboard to fifth.

A 45.49m throw from Eaton – his best in a championships decathlon since 2011 – put the defending champion back on course for a 9000-point score.

He opened with 43.16m before producing his best mark in the second round. He then backed it up with a final effort of 45.39m.

Mayer continued putting together the series of his life, throwing 46.78m – his best ever throw in a championships decathlon – to bring his tally to 6211. The Frenchman moved to within 72 points of Warner, who threw 44.93m.

Kazmirek continued to apply the pressure on Warner, throwing 43.25m to move within 156 points of the Canadian. Like Mayer, Kazmirek is usually stronger than Warner in some of the remaining events, so could theoretically challenge for the bronze medal.

Bourrada set his second PB of the competition, throwing 42.39m to remain on course to break his own African record.

Leonel Suarez moved up the leaderboard by another five places into 10th. After two fouls, the Cuban produced the second-best throw of his life, 47.07m.

Oleksiy Kasyanov also registered fouls with his first two throws, but the outcome for the Ukrainian wasn’t quite as good as it was for Suarez. His final effort wobbled out to just beyond 30 metres, but – knowing that it wouldn’t be enough to mount a serious challenge for the medals – he intentionally fouled and will take no further part in the competition.

Grenada’s Lindon Victor was the top performer in the discus, unleashing a throw of 53.24m. His mark was just 55 centimetres shy of the Olympic decathlon best.

Eaton cleared his opening height of 4.70m in the pole vault, but then failed his first two tries at 4.90m. A third miss would have put him in danger of being caught in the last two events – an unthinkable prospect heading into this competition.

But Eaton kept his cool and got over 4.90m on his third try. Wanting to keep something in reserve for the energy-sapping 1500m later this evening, he then skipped to 5.10m, but once again needed all three attempts to get over.

Eaton then moved to 5.20m and succeeded at his second attempt. He ended with three unsuccessful tries at 5.30m, but his 5.20m clearance was enough to keep him on track for the Olympic record.

Mayer continued his rise – quite literally – as he cleared a lifetime best of 5.40m, putting him on course for the silver medal.

European champion Thomas van der Plaetsen was fairly close on his last attempt at 5.50m, but settled for a best clearance of 5.40m, taking him from 15th to eighth overall.

Warner equalled his season’s best of 4.70m, but with Mayer having the competition of his life, the Canadian slipped from second to third in the overall standings, 268 points behind Eaton and 144 points behind Mayer. Kazmirek, meanwhile, made up more ground on Warner after clearing 5.00m.

With nine men clearing 5.00m, five men over 5.20m and two over 5.40m, it was one of the best quality decathlon pole vault competitions in Olympic history.

After group B’s first round in the decathlon javelin, it looked as though none of the medal positions were safe; not even Eaton’s.

Mayer sent his javelin flying out to 65.04m with his first effort, just a metre shy of his lifetime best. When Eaton opened with 53.26m, Mayer momentarily took the overall lead. Not for the first time this competition, the pressure was on the world record-holder and defending champion.

But that was only half of the drama from round one.

Kazmirek threw a PB of 64.60m, while Warner opened with 58.01m. It meant that Kazmirek moved ahead of Warner by 34 points.

The situation altered slightly in the second round and then changed again in the third.

Eaton improved to 58.26m in the second round before throwing 59.77m with his last attempt. It was several metres down on his PB, but was enough for him to regain the lead heading into the final event.

Mayer didn’t improve on his first-round throw and ended the event just 44 points behind Eaton. It meant that Eaton had to stay within 6.4 seconds of Mayer in the 1500m to win the decathlon.

Warner improved to 63.19m with his final throw, moving him back into third place on the leaderboard. Bourrada threw 66.49m in the javelin to set his third throwing PB of the competition.

As expected, Suarez was the top performer in the javelin, but the Cuban’s mark was still seven metres short of the PB he set earlier this year. The 2008 and 2012 Olympic bronze medallist threw 72.32m to move into sixth place.

Eaton had put together a consistent series of marks across the nine events ahead of the 1500m, but he perhaps wasn’t as dominant as many thought he might be. Added to that, Mayer was having the competition of his life, setting PBs in the 100m, 400m, shot put and pole vault.

Eaton needed to stay within 6.4 seconds of Mayer to win gold. To equal or break the Olympic record, he needed to run faster than 4:23.40.

With the gold medal relatively safe and no world record to chase, Eaton was happy enough to sit in fifth place for the first two laps of the 1500m. USA’s Jeremy Taiwo had the early lead before Bourrada hit the front and extended his lead to the end.

Bourrada crossed the line in 4:14.60 to break his own African decathlon record with 8521 in fifth place.

The focus of the entire stadium was further up the home straight, though. Eaton had moved up to third on the last lap, overtaking Mayer, and was digging deep. He crossed the line in 4:23.33 to bring his tally to 8893, tying the Olympic record set 12 years ago by Roman Sebrle.

Before Eaton came along, Dan O’Brien was the only man to have won the Olympic, world and world indoor combined events titles, as well as setting world records indoors and out.

Eaton has now done all of those things. Twice over.

“To win two Olympic golds in a row like Daley Thompson is very special,” said Eaton. “One day, I'm going to have to meet Daley, shake his hand and thank him for giving me something to chase after.

“My throwing has been bad in the past, but I really got after the discus and shot here,” he added. “Can I do three in a row? Maybe you should ask Daley.”

Mayer rounded out his decathlon of a lifetime by clocking 4:25.49 in the 1500m, giving him a score of 8834. Not only does it smash the French record by 260 points, but it also moves Mayer to sixth on the world all-time list, one place behind Thompson and ahead of Jurgen Hingsen and Bryan Clay.

Warner had also been under intense pressure throughout the competition. Viewed as a solid bet for the silver medal going into the decathlon, the Canadian’s hopes of living up to those predictions slipped away with each event as Mayer produced PB after PB.

The world silver medallist kept his cool, though, and ensured he stayed ahead of Kazmirek to hold on to the bronze medal. Knowing that he couldn’t let the German finish more than 6.4 seconds ahead in the 1500m, Warner easily achieved that goal, clocking 4:24.90 to Kazmirek’s 4:31.25.

Warner took bronze with a season’s best of 8666 with Kazmirek setting a PB of 8580 in fourth to extend his lead at the top of the 2016 IAAF Combined Events Challenge standings.

Suarez finished sixth with 8460, his best score since the last Olympics. USA’s Zach Ziemek was seventh with 8392, while Van der Plaetsen was eighth with a PB of 8332.

For the first time in Olympic history, 11 men scored 8300 or higher. But in a competition of unprecedented depth at the Games, still no one was able to beat Eaton.