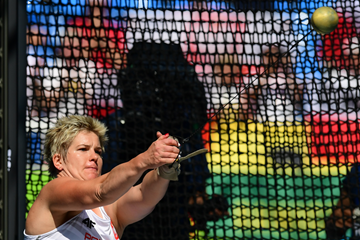 You should never expect a world record, but if any athlete appeared poised to deliver such a feat it was the remarkable Anita Wlodarczyk, who came good on her pre-event promise to land the Olympic title in the ultimate style.

The giant Pole, who is unbeaten in more than two years, launched the hammer out to a monster world record* of 82.29m in round three to add 1.21m to her own mark set last year in Cetniewo. In a further demonstration of her ability, she produced three of the five longest throws in history and she now boasts the top 15 throws of all time (including all marks within series).

Victory also ensured the she has the full cache of titles; Olympic, world and European, and she now becomes the second Pole after the late Kamila Skolimowska to claim this title.

Wlodarczyk is quite simply the greatest women’s hammer thrower of all time.

In the battle for the minor medals, China’s Zhang Wenxiu fired the hammer out to 76.75m to add the silver medal to the bronze she won at the 2008 Beijing Olympics.

Meanwhile, Sophie Hitchon became the first British winner of an Olympic hammer medal for 92 years, as she clinched a dramatic last-gasp bronze courtesy of a timely national record mark of 74.54m in round six.

In the first round, Zhang took an early lead with a decent 75.06m opener – a little over half a metre down on her season’s best. However, Wlodarczyk responded with a ‘sighter’ at 76.35m to take the lead she was never to relinquish.

Germany’s 2007 world champion Betty Heidler was the only other woman beyond the 70-metre mark in the opening stanza, recording 71.38m.

The formidable Pole found her groove in round two, unleashing a mighty effort of 80.40m to snare the Olympic record with what was at that point the third-longest throw of all time.

The other major mover was Hitchon, who scuttled up the leader board to third, registering 73.29m, an effort which prompted a triumphant raise of the arm from the Briton, who finished a frustrating fourth at the IAAF World Championships Beijing 2015.

In round three, Zhang consolidated her hold on silver with a season’s best of 76.19m to put clear daylight between herself and bronze.

However, the third round was all about Wlodarczyk’s thunderbolt – the third world record in the athletics programme at the Rio 2016 Olympic Games – and she celebrated her moment by jogging towards the Polish fans corralled in the stand close to the hammer cage to comprehend the accomplishment.

At halfway it was Wlodarczyk from Zhang followed by Hitchon. With a modest best of 65.18m, world bronze medallist Alexandra Tavernier of France would play no further part in the competition.

The fourth round witnessed a significant move as Zalina Marghieva of Moldova hurled the metal ball out to 73.50m to assume provisional bronze and relegate Hitchon to fourth. US champion Amber Campbell catapulted up to fifth with 72.74m.

Wlodarczyk, with the adrenaline presumably coursing through her veins following her world record throw, pushed it a little too hard and received a red flag her fourth attempt.

There was more change in round five as Heidler, who had been struggling to find her rhythm, took her turn to move into bronze with a 73.71m effort.

Zhang also produced her best throw of the competition with 76.75m while Wlodarczyk tossed the hammer out to 81.74m – the second-longest throw in history.

The main drama in the final round saw Hitchon time her medal-winning effort to perfection as she added 68 centimetres to her British record and celebrated by rushing towards the crowd and leaping on to the top of the photographer’s moat in ecstasy.