After more than two years out of action, Janet Rono made a successful return to road racing with victory at the RheinEnergie Cologne Marathon, an IAAF Silver Label Road Race, while fellow Kenyan Nicholas Chelimo broke 2:10 for the first time in three years to win the men’s race.

Rono last raced in 2011, the year in which she set her previous PB of 2:33:42 when winning at the Hong Kong Marathon. On that occasion she wasn’t even one of the invited elite runners; instead she paid her own airfare to the race and entered as a member of the public.

In Cologne she was part of the elite women’s field, but even then she was drafted in as a late replacement. She didn’t waste the opportunity and set off faster than ever before, opening up a gap of almost two minutes over Poland’s Agnieszka Gortel in the first 10km, which was covered in 34:21.

Rono continued to front-run and went through the half-way mark in 1:13:20, almost three minutes faster than her official PB for the distance. By 30km, reached in 1:44:35, Rono’s lead had grown to nearly three minutes.

In second place, Gortel was also operating well within PB pace and during the next 10km the 36-year-old managed to make up one minute on Rono.

But ultimately the 25-year-old Kenyan’s lead was too big and Rono won in 2:28:36, smashing her PB by more than five minutes. Gortel finished strongly to take second place in 2:30:28, taking more than three minutes off her personal best to record the second-fastest time this year by a Polish woman.

In stark contrast to the women’s race, the men’s title was only decided in the closing stages.

A large group of 14 athletes passed through 10km in 30:30 and only two men from that pack had fallen behind as they reached half way. Their split of 1:04:28 suggested that a finishing time inside 2:09 was possible, but the pace dropped slightly over the following 10km.

Chelimo then took up the running and was joined at the front by Chirchir. Although their pace didn’t increase, they were simply able to maintain the current tempo better than the rest. Koech tried his best to stick with them, but gradually faded in the closing kilometres.

At the end it was Chelimo who had the better staying power, forging ahead to win in 2:09:45, his first sub-2:10 performance since setting his PB of 2:07:38 in Eindhoven three years ago.

Chirchir was just nine seconds behind in 2:09:54, just 30 seconds shy of the PB he set when finishing sixth in this race last year. Koech ran 2:10:10 for third place, repeating his finishing position from last year.

Ethiopia’s Workneh Tiruneh took almost two minutes off his PB to take fourth place in 2:10:26 while Kipsang Kipkemoi passed a fading Kiplimo in the closing stages to finish fifth, both athletes setting PBs with respective times of 2:11:25 and 2:11:30. 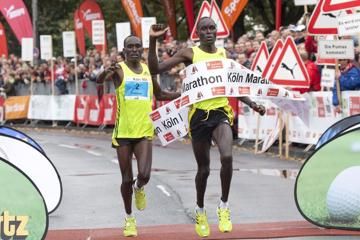 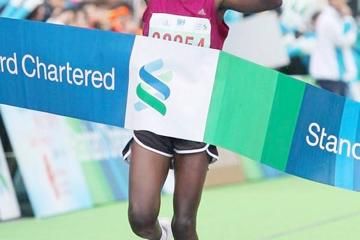 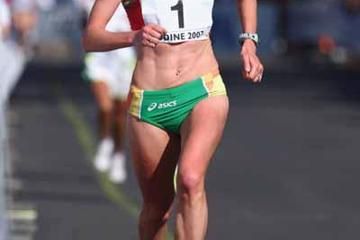