Sally Pearson back indoors and runs world-leading 7.79 in Berlin

The 2011 World Athlete of the Year and London 2012 Olympic Games 100m hurdles champion had her first indoor outing since winning the 2012 IAAF World Indoor Championships 60m hurdles crown almost two years ago but proved that she will be a difficult person to dethrone next week in Sopot, Poland, when she sped to a world-leading 7.79 in her heat followed by 7.80m in the final.

A distant second in Berlin was Germany’s in-form Nadine Hildebrand with 7.98, who just edged out Yvette Lewis, the latter finishing third and equalling her own Panamanian record of 7.99.

More than 10,000 spectators crowded into the arena and were treated to great poerformances from local stars and likely Sopot medal contenders Malte Mohr and David Storl.

Mohr, a bronze medallist at the 2010 World Indoor Championships and fourth at the last edition in Istanbul, went over an indoor personal best of 5.90m on his third attempt before having three unsuccessful tries at a German indoor record of 6.01m.

Two-time world outdoor champion Storl extended his winter winning streak to seven competitions when he sent his implement out to 21.20m with his opening effort. He then had five fouls in a bid to improve on that mark. Bulgaria’s Georgi Ivanov finished second with 20.40m.

The venue was big enough to allow a rare indoor discus competition and Germany’s Martin Wierig upset the odds by throwing 64.82m to win.

Poland’s Piotr Malachowski was second with 63.73m while Germany’s current world and Olympic champion Robert Harting was only able to manage fourth place with 62.20m.

Germany's 2010 European 100m champion Verena Sailer equalled her 60m best when winning in 7.12 while Kim Collins of St Kitts and Nevis took the men's sprint in 6.52.

On the other side of the Atlantic on Saturday night, Deon Lendore improved his own Trinidad and Tobago 400m national record by 0.12 to 45.03 at College Station.

It was a 2014 world-leading performance over two laps of the track and moved him up to number six on the world indoor all-time list.

Lendore then helped the mixed nationality Texas A&M university team to win the 4x400m in a world-leading 3:03.20, which equals the fifth fastest performance ever indoors. Second was an all-USA Florida University team in 3:03.50.

In the 200m, behind Brown, Kyra Jefferson finished second in 22.87 but Dezerea Bryant ran in another final and was even faster with 22.75, both times being personal bests. 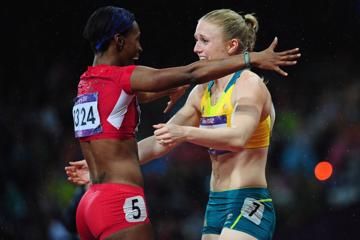