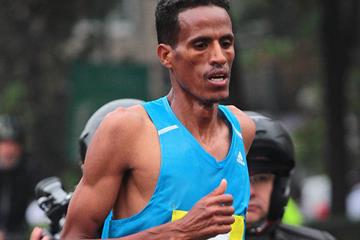 Eritrean Beraki Beyene and Kenyan Emily Perpetua Chepkorir won the eighth edition of the Santiago de Chile Marathon, an IAAF Bronze Label Road Race that took place in the Chilean capital on Sunday (6). Beyene’s time was 2:11:50, while Chepkorir’s was 2:35:16.

The morning was cold at 8°C and foggy, but 25,000 enthusiastic runners made the day colourful at the start of the race near the ‘Palacio de Gobierno’ (Government’s Palace) in the Chilean capital.

Only 4000 runners took part in the marathon. France’s Patrick Tambwé, who had the fastest time of all participants with 2:07:30, withdrew from the race at 12km.

The race was decided in the final 5km, when the 34-year-old Beyene, eleventh at the 2013 World Championships in Moscow, was able to pull away from the rest of the Africans, winning in 2:11:50. The Eritrean missed the course record by only six seconds.