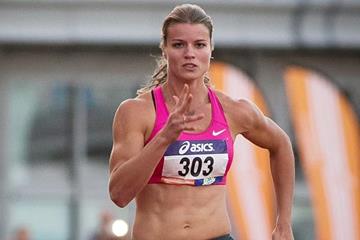 Running in her season's debut, the 25-year-old Dutchwoman clocked 10.95 to win the 100m, well ahead of world and Olympic long jump champion Tianna Bartoletta of the US who clocked 11.08.

Schippers doubled back to take the 200m in 22.29, the second early-season world-leading performance of the day for the Olympic silver medallist over the distance.

Desiree Henry of Great Britain was second in 22.69 after clocking 11.09 in the 100m where she finished third.

Schippers, Bartoletta and Henry are all expected to return to the track next weekend at the IAAF/BTC World Relays Bahamas 2017 in Nassau.

In other action, two-time world and twice Olympic triple jump champion Christian Taylor opened his 2017 campaign in his specialty with a 17.26m leap to take the win.