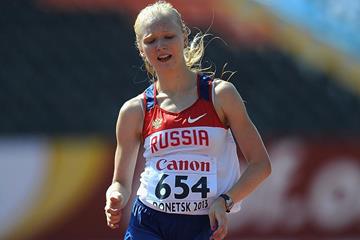 There has never been so much excitement in a boys’ 10,000m Race Walk final at the IAAF World Youth Championships as there was today (13) in Donetsk.

Australia’s Nathan Brill was the early leader and at one point had a huge lead over a chase pack. Brill was still in front at half way, reached in 20:53.73, but was gradually caught by the chasers.

Krasnov temporarily took the lead for a few laps before Barrondo hit the front again in the closing stages. But a fresh-looking Yamanishi then took up the pace heading into the final lap, opening up a significant lead as Garcia dropped back off the chase pack.

Yamanishi went on to win in a PB of 41:53.80, while Barrondo – who at this point was in second place – was disqualified just 80 metres from the finish line.

But there was more drama further behind as a resurgent Garcia made up a huge deficit to almost catch Krasnov. The Russian, however, just managed to hold off the late challenge to take silver, 42:03.10 to 42:03.32.

Yamanishi’s gold is the first World youth title for Japan in a track event. The country’s only other two golds to date have both been in the boys’ Long Jump.

There were significantly fewer surprises in the girls’ 5000m Race Walk. Several laps from the finish, world youth leader Olga Shargina of Russia broke away from long-time leader Neomi Stella of Italy.

Shargina went on to win in 22:13.91 to win Russia’s sixth gold medal in this event at the World Youth Championships. On a good day for Japan in the race walking events, Momoko Mizota overtook Stella to get the silver medal in 22:42.77 while Stella held on for bronze in 22:48.95.

Britain’s Morgan Lake was the star of the Heptathlon on day one and began today with a lead of nearly 200 points. But disaster struck in the Long Jump where she registered two fouls and had to make do with a best of 4.63m from a first-round aborted effort.

Crippled in disbelief, Lake was clearly distraught. But despite the result, she still ended the event in a medal position in the overall standings.

The best jump came from German’s Celina Leffler, who set a PB of 6.09m to move into the overall lead. Sweden’s Emma Stenlof also remained in contention with a 5.49m leap.

Leffler extended her lead after the Javelin, where she threw a PB of 40.95m, bringing her points tally to 5007 heading into the final event. Stenlof also set a PB with 38.81m to maintain econd place overall.

It was a good event for the Australians as Aliyah Johnson and Alysha Burnett set PBs with marks of 40.73m and 44.87m respectively. In the overall standings, Johnson moved up one place to third as Burnett went into fourth place.

With a throw of 30.81m, Lake slipped further down into sixth place behind Germany's Louisa Grauvogel. If everyone runs to form in the final event, the 800m, then the top six positions will remain the same. But while Leffler looks destined for gold, the battle for bronze is wide open and any one of a handful of athletes could take it if they set a PB in the 800m.

Favourites safely through in Medley Relays

The defending champions in both the boys’ and girls’ Medley Relays sailed into the finals.

Jamaica set a World youth best when they triumphed in Lille two years ago, and this morning they qualified for the final with ease, winning their heat in 2:07.85. USA were slightly quicker in their heat with 2:07.13, while 2011 bronze medallists Canada won the other heat in 2:08.52.

The other teams who will be in the final are Nigeria, Japan, British Virgin Islands Czech Republic and China.

Several athletes who have already won medals here in Donetsk were in action again this morning, aiming to qualify in their second event.

Germany’s Henning Prufer, who took silver in the Shot, overcame two fouls in the boys’ Discus to qualify safely with 59.54m. Australia’s Matthew Denny, the Hammer bronze medallist, led the qualifiers with 65.66m. But Prufer’s team-mate Tony Zeuke, the fifth-ranked athlete in the world this year, failed to register a valid throw.