Caster Semenya secured a unique treble on Saturday (16), racing to three individual titles on the second and final day of the South African Championships in Stellenbosch.

Her performance in the 400m was her third PB of the year in that event, having clocked 52.21 and 51.47 last month. It is also the fastest by a South African athlete for 15 years and moves her to fifth on the national all-time list. Her time in the 800m was not only a stadium record, but it was also her fastest mark since the London 2012 Olympics.

A little more than three hours later, she returned to the track for the 1500m final, and after starting conservatively, she closed the gap on University of Arkansas athlete Dominique Scott and burst clear on the last lap to win in 4:10.93.

World 400m champion Wayde van Niekerk, who had opened his 2016 campaign last month with a 9.98 run over 100m in Bloemfontein, made his first appearance of the season in the one-lap sprint.

Though he was cautious out of the blocks, Van Niekerk gained momentum around the top bend and coasted to victory in 44.98. Shaun de Jager was a distant second in 45.90.

In total, six world-leading marks were set during the two-day championships.

Victor Hogan, who finished fifth in the discus at the IAAF World Championships Moscow 2013, made a spectacular return to form on Friday after struggling with injuries in recent seasons.

The 26-year-old added more than two metres to his PB with a 67.62m world lead to bag the national crown. Hogan’s winning mark moved him to fourth on the South African all-time lists. Russell Tucker’s best attempt of 63.96m earned him the silver medal.

Later that day, world finalist Wenda Nel successfully defended her 400m hurdles title in style, storming across the line in 54.84 in her first race of the year at her specialist distance.

All-Africa Games champion Antonio Alkana continued his steady progress in the early stages of the season, charging to victory in the men’s 110m hurdles in a world-leading 13.37, just 0.05 shy of his lifetime best.

Mokoka and Conley do the double

Semenya wasn’t the only athlete to win multiple titles in Stellenbosch.

In the closest race of the championships, Alyssa Conley surprised national record-holder Carina Horn in the 100m to win by one hundredth in 11.36 (-0.2m/s). Both women had gone faster in the previous round with Horn clocking 11.26 and Conley running 11.35, but the temperatures had dropped by the time of the final.

The men’s 100m final didn’t quite live up to the pre-championships expectations as national record-holder Akani Simbine injured himself in the closing stages. Having clocked 10.06 in the semifinal, Simbine had to settle for second place in the final in 10.21 as Henricho Bruintjies won in 10.17.

African champion Lebogang Shange again flaunted his consistency, securing the national title in the men’s 20km race walk in 1:20:42, as he held off Wayne Snyman by four seconds in a tight contest. Shange’s performance was the second-best of his career and just 36 seconds short of the national record he set earlier this year. Snyman, meanwhile, improved his best by nearly a minute.

LJ van Zyl clocked 49.34 to win his eighth national title in the men’s 400m hurdles. The 2006 Commonwealth champion finished in front of former training partner Cornel Fredericks, who clocked 49.75 in what was his first competition of the year.

In the final field event of the day, 43-year-old Chris Harmse stretched his impressive winning streak in the hammer at the annual South African Championships, producing a 73.32m effort to bag his 21st consecutive national title. 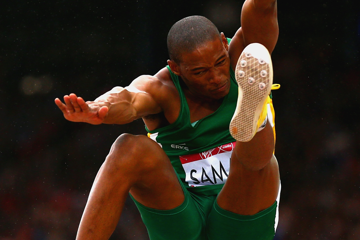 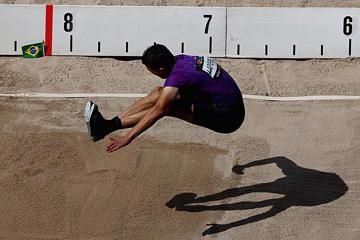