Serbia’s Ivana Spanovic extended her advantage in the Diamond Race by taking her third win over a formidable women’s long jump field at the Bauhaus-Galan meeting in Stockholm on Thursday night (16), the eighth event of the IAAF Diamond League.

Spanovic defeated the reigning world and Olympic champions and laid down a notable marker with less than two months to go until the Games begin in Rio de Janeiro.

With five women in the field who have jumped beyond seven metres, it was always going to take a jump close to that to take victory and despite the damp, cool conditions, that’s exactly what Spanovic produced on her second jump. The Serb soared out to 6.90m, her best effort of the night by some distance.

“This is the third competition in a row where it has been really cold,” said Spanovic. “I’m satisfied with the result but I know that I could jump much further than 6.90m.”

With the IAAF Diamond League now taking a four-week break, Spanovic will turn her attention to next month’s European Championships, where she is supremely confident about her chances.

“I’m looking forward to going to Amsterdam and winning gold,” she said. “After that I will stop competing for six weeks before Rio and I will do everything to go there in the best shape of my life and win gold.”

World champion Tianna Bartoletta opened with a solid effort of 6.68m to move into second place, but that was as far as the US jumper could manage on the night. Compatriot Brittney Reese opened with 6.67m, and after three failures and a modest effort of 6.64m, looked set to settle for third on the night, but the Olympic and world indoor champion saved her best for last.

Reese produced a leap of 6.88m on her final attempt, just two centimetres shy of Spanovic’s mark, to move up to second.

Taylor sails through the rain to 17.59m

Christian Taylor made it three from three in the IAAF Diamond League this season, taking victory by almost a metre with his sixth-round effort of 17.59m, his second longest jump of the year.

"I wanted to stay consistently over 17 metres," he said. "The crowd really got into it and helped. I'm healthy, I'm happy, and now all the focus is on to the [US Olympic] trials at the beginning of July. I can relax a little bit now, recharge and get ready to go again."

Another athlete with a perfect record so far this year is discus thrower Sandra Perkovic. After taking wins in Shanghai, Eugene and Oslo, the Croatian continued her dominance in Stockholm with another commanding win in the women’s discus. She took control from the outset, shrugging off the damp conditions to launch the discus 66.11m in the first round.

In the end, that would have been more than enough for victory, but Perkovic extended her advantage in the fifth round with a throw of 68.32m.

“The conditions made it tough today,” she said. “I feel really good and am throwing really well at the moment.”

France’s Melina Robert-Michon was best of the rest with her throw of 64.96m in the fifth round, while Cuba’s world champion Denia Caballero was third with 63.85m.

In the men’s javelin, Egypt’s Ihab Abdelrahman sprang a surprise on Germany’s Thomas Rohler, launching the spear 86.00m in damp conditions in the third round to take victory by 11 centimetres.

Current Diamond Race leader Rohler maintained his lead at the head of the overall standings with a second-place finish, his best effort of 85.59m also coming in the third round. Kenya’s world champion Julius Yego was third with a best of 83.09m.

Beitia the best once again

It doesn’t rain much in Spain, so the constant drizzle that poured down during the women’s high jump was not much to the liking of Ruth Beitia. Nonetheless the 37-year-old Spaniard is an experienced performer, one who knows exactly what it takes to get it done in any conditions, and that showed once again as she cleared a season’s best of 1.93m to take victory.

After clearing 1.90m on her second attempt, Beitia was involved in a three-way battle with Italy’s Alessia Trost and Poland’s Kamila Licwinko when the bar moved up to 1.93m. It was a height only Beitia, the world indoor silver medallist, could clear, which she did on her second attempt. She took the win ahead of Trost, who edged Licwinko for second on countback.

France’s Renaud Lavillenie extended his advantage at the head of the Diamond Race standings with his third successive victory in as many weeks on the IAAF Diamond League circuit.

With damp conditions on the runway, Lavillenie played a risky game by entering the competition at 5.65m, which almost backfired on him as he failed his first two attempts. However, the 29-year-old made the appropriate adjustments and sailed clear on his third attempt, which pushed him immediately to the lead.

World champion Shawn Barber of Canada also needed three attempts to go clear at 5.65m, and with third-placed Mareks Arents of Latvia checking out with a best of 5.50m, the competition boiled down to the expected head-to-head.

As the bar moved up to 5.73m, both Lavillenie and Barber failed their first attempts, but Lavillenie proved his class once more on his second try and sailed clear. Barber was unable to match him, and had to take second place behind the Frenchman once again. 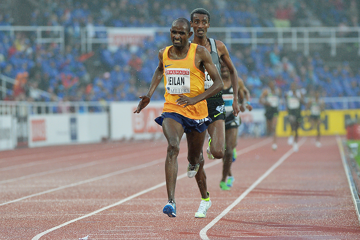 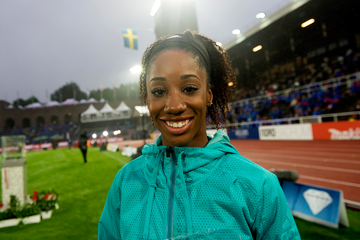 Harrison defies the rain as Kallur returns in...