Japanese athletes Yusuke Suzuki and Kumi Otoshi delighted the home crowd in Nomi, Japan, on Sunday (10) with their victories at the Asian 20km Race Walking Championships, part of the IAAF Race Walking Challenge.

It has become common to see Suzuki charging along at the front of the first few kilometres at a major championship. The 25-year-old filled the frame in lead-vehicle cameras at both the IAAF World Championships at Daegu in 2011 and last August’s Olympics before fading.

In fact, he ended up a distant 36th on The Mall in London – but it looks as if those rabbit days are over after he set a national 20km record here to eclipse the one he set in Kobe just last month.

His success, this time in an IAAF Race Walking Challenge race that doubled as the Asian Championships, was all the more remarkable because it was achieved in a cold blustery wind, spiced up by torrential rain. What’s more, Nomi City, unlike other IAAF Challenge races, has seven turns on a 2km loop.

Race walkers have got used to a straight-up, straight-back circuit, but the course in the recently-created city on Japan’s southern isle of Honshu was anything but easy.

There were a fair few toeing the line in both the men’s and women’s races that eschewed their full warm-up for fear of ending up soaked and shivering before the gun. None of which bothered Suzuki, who instantly hit fourth gear like the race bike whose name he bears.

Roared on by fans in his home city, there were plenty at that stage wondering out loud whether Suzuki might trouble Vladimir Kanaykin’s five-year-old World record (1:17:16).

But even though hope of eclipsing the Russian quickly faded as Suzuki slowed slightly over the second half to notch a final 5km of 20:15, his winning time of 1:18:34 sliced 28 seconds off his own national record, barely a month old.

It was all the better for Japanese medal hopes at the IAAF World Championships in Moscow later this year that Suzuki picked up not a single disqualification or warning card.

Singh has likewise been making progress as a beacon of what India with its huge population might achieve. But the man from Bangalore suffered a relatively slow third 5km (21:01) before he got a second wind and ended up just 10 seconds short of Li in a fascinating chase over the last few hundred metres.

Like Suzuki, there was no-one capable of troubling Kumi Otoshi in the women’s 20km.

The Japanese was also minus a challenge from the start, and when the weather was at its worst, she was forced to deal with the effects of leading from the front and battling the elements.

In fact, Otoshi’s 24:51 final 5km split was exactly 51 seconds slower than second-place finisher Thi Thanh Phuc Nguyen – although by then the Japanese had an unassailable lead stretching almost two minutes.

Nguyen first came to prominence in this race last year where she achieved the breakthrough that qualified her as Vietnam’s first Olympic walker.

She was third in 2012 in Nomi, and although 13 seconds outside the mark she set then, moved up a place in far more trying conditions.

It says much for the future of the IAAF Race Walking Challenge that countries like Vietnam, India and Iran – represented here by men’s fourth-place finisher Ebrahim Rahimian Khanghah – are starting to make regular inroads on the race circuit and boost the credentials of both the sport and the series as a truly global event. 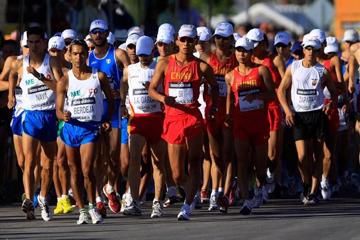