Rain at the start made the streets difficult to negotiate the many turns on the course and several times runners in the lead pack almost fell. Even stronger rainfall later assured the course records would stand for at least another year.

A lead group of eight men ran together for the first half of the race with Kenya’s Festus Talam and Uganda’s Geofrey Kusuro sharing much of the effort up front. Kenya’s Nicholas Bor and Richard Mengich, along with the Ethiopian trio of Takele, Azmeraw Bekele, and Atsedu Tsegay, made up the rest of the lead group.

A 14:09 split at 5km meant they were on pace to run faster than 60 minutes, but by 10km the pace had slipped to 28:30 as Japan’s Masamichi Ysuda was unable to maintain contact.

The small hills and strong rain before 15km, reached in 43:08, again took their toll, and they were now down to five runners with Bor and Ethiopian record-holder Tsegay losing contact with the leaders.

The final three kilometres soon became a war of attrition as first Bekele and then Kusuro was unable to match Takele’s surges. The 25-year-old, who hadn’t won a half marathon since his first race over the distance in 2011, finally triumphed. His winning time of 1:00:45 was just 30 seconds shy of the PB he set when finishing ninth at this year’s IAAF World Half Marathon Championships.

Bekele finished 13 seconds back in second and Kusuro kept the Kenyans off the podium for the first time in Usti, finishing six seconds further back. Milan Kocourek was the top Czech finisher in 12th place, running 1:05:47.

Another big win for Jepkoech

The women's race was slightly less complicated with four of the Kenyan women who competed last week in Prague forming a lead pack along with the Ethiopian teenager Kumeshi Sichala.

The group went through 5km in 16:07, well inside race record pace, but by 10km Prague Grand Prix winner Jepkoech had opened a 20-second lead over her compatriots, Helah Kiprop, Esther Ndiema, and Flomena Chepchirchir while Sichala dropped some 41 seconds further back.

From there, Jepkoech continued to open the gap back to her compatriot and, although she was noticeably struggling during the final few kilometres, she managed to win in 1:09:35, more than a minute ahead of Kiprop, who finished in 1:10:48, just edging Chepchirchir by three seconds. 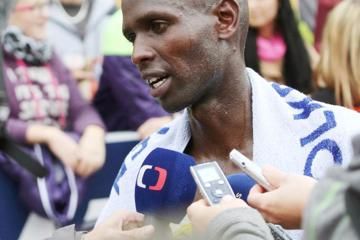 Limo and Chepkoech win at the Ústí nad Labem ...