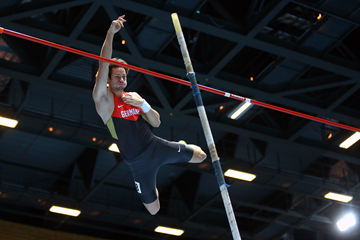 Kazmirek added to his lead at the start of the second day on Sunday when he was the fastest man in the 60m hurdles with 8.02, just 0.02 shy of his personal best, and a 4.85m pole vault gave him a 111-point advantage over Brugger ahead of the last event. A 1000m run in 2:43:47 ensured he won in Tallinn for the second successive year.

Brugger won his third individual event, after the shot put and pole vault, when crossing the line in 2:38:06 but still had to settle for second with a personal best of 6060 points.

Kazmirek’s win in Tallinn should be enough to secure an invitation to contest the heptathlon at the IAAF World Indoor Championships Portland 2016.

In the women’s pentathlon in Tallinn, Kazmirek’s compatriot Claudia Rath romped to victory by more than 300 points with a personal best of 4688, the second best in the world this year.

There were four other world-leading marks set in the USA by US athletes on Saturday.

Raven Saunders already held the world-leading mark in the shot put with 18.98m from a fortnight ago but the 19-year-old student, who is coached by Connie Price-Smith, surpassed 19 metres for the first time when she heaved her implement out to 19.23m to add 25 centimetres to her world-leading mark at the Iowa State Classic in Ames.

The world junior silver medallist, and one of the few world-class female shot putters to employ the spin technique, also added the US collegiate indoor record to her list of accolades.

Eric Sloan became the first triple jumper to exceed 17 metres this year when he bounded out to 17.03m at the Tyson Invitational in Fayetteville.

World-leading times by University of Texas teams in both the 4x400m relays were also set in the Arkansas city. An all-USA men’s team clocked 3:04.41 while a mixed-nationality women's team ran 3:27.94.

Hannes holds the Belgian indoor record at 1500m but he just missed the national record at this distance of 5:00.0 which has been held by Emiel Puttemans since 1973.

The meeting also played host to two good quality 800m races won by teenagers who could make an impression at the IAAF World U20 Championships in Bydgoszcz this summer.

On the in-field, Chinese teenager Huang Bokai won the pole vault with a 5.70m clearance while Alessia Trost marked her comeback from injury by winning the high jump from Belgian combined-eventer Nafissatou Thiam on countback at 1.90m.

Karalis, who took the bronze medal in Cali last summer, improved his lifetime best by 18 centimetres in total with first-time clearances at 5.39m and 5.53m before three unsuccessful attempts at 5.60m. His 5.53m is also an outright world youth best, surpassing the 5.51m set by German Chiaraviglio in 2004.

Two-time world finalist Konstadinos Baniotis claimed another Greek title in the high jump with a 2.33m clearance, his best result since 2013, before one attempt at 2.35m and two attempts at 2.37m.

World indoor 60m hurdles record-holder Susanna Kallur continued her comeback with her first appearance in a Swedish vest in six years at the Nordenkampen, a four-way Scandinavian international match, in Vaxjo on Saturday.

Kallur will only be racing on the flat this winter and the 34-year-old finished a close second in the 60m to Norway’s Ezinne Okparaebo. Okparaebo claimed the win in 7.34 with Kallur just a fraction behind in 7.35 in what was just her second race at the distance since 2007.

In-form Angelica Bengtsson won a full complement of points for the hosts in the pole vault by clearing 4.66m before three attempts at a Swedish record of 4.71m.

Denmark and Iceland competed as a joint team and produced two standout performances on the track: 400m hurdles specialist Sara Peterson won the 400m flat in a Danish record of 52.59 while Iceland’s Anita Hinriksdottir won the 800m in 2:01.59.