Teenagers Kirui and Aga show off their prodigious talent in Brussels

The 18-year-old Kenyan broke away from a strong leading group at the halfway mark to eventually win by nine seconds. Ethiopia’s Ruti Aga took the women’s race after a close battle with Ireland’s 2011 and 2012 European cross-country champion Fionnuala Britton. Like Kirui, Aga is only 18 years old as well, the pair being born just six days apart in their neighbouring countries.

After the first two of the seven 1.5km laps around the Parc de Laeken, a group of 13 athletes were still together, including all the expected pre-race favourites. Driving the group was Kirui, fellow Kenyan Alex Kibet and France’s Hassan Chahdi, a silver medallist at the European Cross Country Championships two weeks ago.

The Frenchman was the first to make an injection into the pace, leaving Italy’s 2012 European cross-country champion Andrea Lalli in difficulty, but soon Chahdi himself started to drift back as Kirui, Kibet along with Morocco’s Hassan Chani opened up a gap.

Kirui clearly wasn’t satisfied with the situation as soon afterwards he accelerated to leave his two main rivals behind in the heavy rain, which led to many other runners floundering in the mud.

However, Kirui never looked seriously affected by the challenging conditions over 10.5km of tough running and even sprinted through the finish line in 33:02 before Kibet secured second place.

Eritrea’s Tsegay Tuemay came from a long way back in the final kilometres to catch Chani and Chahdi, crossing the line third.

“No, I don’t feel tired," said Kirui, with a big smile. “I finished third here in a strong field last year and I wanted to come back and aim for gold. My shape is fine and I felt confident. That’s why I didn’t hesitate to break away at the halfway point.

The women’s race saw the leading group of six athletes splinter into pieces when the young Ethiopian Ruti Aga started to push it hard midway through the 6km race. Only her compatriot Elini Gebriwoth and Britton could stay with the pace of Aga from the halfway point.

The Irish showed true fighting spirit in running shoulder- to-shoulder with Aga and testing her on difficult parts of the course while Gebriwoth soon became a victim of this fierce battle.

On the last 1.5km lap, the World junior 5000m silver medallist was able to open up a 10-metre gap that Britton couldn’t close, and the latter came home three seconds in arrears after Aga stopped the clock in 20:48.

“She (Aga) doesn’t speak English and I can’t translate, because she’s from a different area in Ethiopia and she speaks another language," admitted third-placed Gebriwoth after the race. “But she is a real talent and a strong athlete.”

Britton was still thrilled about her race, despite the defeat. “I love to run on this course in Brussels and the rain and the wind did not disturb me too much. I had a bad start and I needed to do some work to get to the front of the race.

“I was in contention all the time although I didn’t feel very prepared for this race. After winning a second consecutive European title, training doesn’t get the focus that it usually gets,” added the Irish runner.

Great Britain’s European under-23 cross-country champion Jess Coulson was with the early leading group but dropped back to 11th during the latter stages of the race.

BACK
Pages related to this articleAthletes
Gilbert Kiplangat Kirui 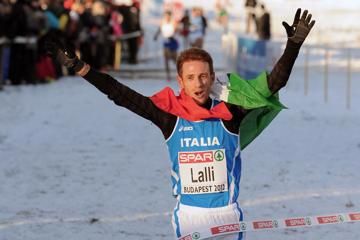