Third win in a row for Gebremeskel, Burka makes Ethiopian double in Carlsbad

The possibility of a 5km World record was out the window by the one-mile mark in Carlsbad, but that didn't worry Ethiopian Dejen Gebremeskel. Victory was his only objective on Sunday afternoon.

Sitting pretty in a pack of 13 through a strategic first mile split of 4:22, the Olympic 5000m silver medallist bided his time through the first hairpin turn 1.25 miles into the race before countryman Yenew Alamirew ratcheted down the pace with a 4:17 second mile split into a headwind heading north along Coast Boulevard.

Gebremeskel and John Kipkoech of Kenya were the only two runners that went with the 22-year-old’s strong surge, and with a half mile to go Gebremeskel asserted himself as the man to chase. Coming off the final turn toward the finish line, the World 5000m bronze medallist was clear of his two pursuers and held his lead through the finish line to win in 13:21 – the slowest winning time at the Carlsbad 5000 since 2008.

“Today was special for me to win three times," said Gebremeskel. "Carlsbad is like family so I will come every year. I’m glad to get the win. After winning Carlsbad last year I had a lot of success, and hope that this year I will have a lot of success at the World Championships. I hope to win a medal.”

Kipkoech, the 2010 World junior 5000m silver medallist, crossed the line in 13:26 to finish second, one second ahead of Olympic 5000m finalist Alamirew.

Will Leer was the top US finisher in fourth place, clocking 13:36. The reigning US indoor 3000m and mile champion, Leer battled with fellow American miler David Torrence through 2.5 miles before pulling away and kicking past four runners over the final 400m.

Ethiopian Gelete Burka made her first trip to Carlsbad a memorable one, outlasting Kenyans Mercy Cherono and Paskalia Kipkoech. The women's elite race also went out slowly, with a large pack hitting the mile mark in 5:15. After the turn on to Coast Boulevard, the pace picked up with a 4:54 second mile split, sending the pack into all sorts of disarray.

Burka, Cherono, Kipkoech and Werknesh Kidane separated from the rest of the field before two-time World junior 3000m champion Cherono tried to make a break with a kilometre to go. Burka covered the move, and had given herself all the breathing room she needed with half a mile to go, winning the sprint to the line in 15:26.

Cherono and Kipkoech were both credited with the same time (15:28), but the nod for second went to Cherono while Kipkoech took third. Last year's runner-up, Werknesh Kidane of Ethiopia, finished fourth in 15:36. Burka’s winning time was the slowest winning time since Aheza Kiros of Ethiopia broke the tape in 15:38 four years ago.

Middle-distance specialist Brenda Martinez was the top US finisher in fifth, crossing the finish line in 15:44. For the 25-year-old, the race was the culmination of her strength phase of training before she turns her attention back to the 1500m and 800m this summer. 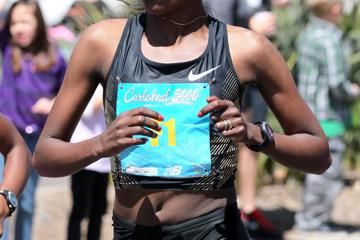 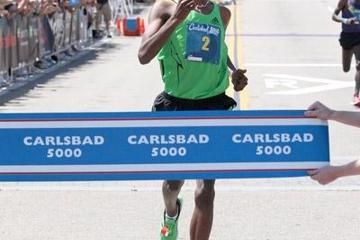 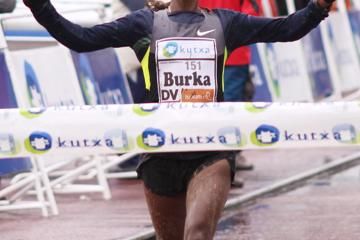 Kipruto and Burka the commanding victors at E...