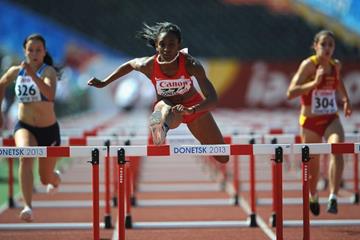 The majority of sprinting events during the morning session on the first day of the IAAF World Youth Championships in Donetsk saw US athletes record the fastest times in the heats.

The wind was generally against the sprinters in the boys’ 100m heats, but it would occasionally switch direction in their favour. One such heat saw USA’s Kenzo Cotton win in 10.52 (0.1m/s), the fastest time of the day.

China’s Mo Youxue was the next fastest with 10.64, but he had to contend with a -1.7m/s headwind. Britain’s Ojie Edoburun, winner of the sixth heat, also looked very impressive, easing down way before the finish to clock 10.68 into a -1.0m/s headwind.

Cotton’s US team-mate Jaalan Jones also made it safely through to the next round, as did Jamaica’s world youth leader Michael O’Hara and his compatriot Waseem Williams, both running 10.66 to win their respective heats.

World youth leader Yanique Thompson of Jamaica made it safely through to the next round of the 100m hurdles, winning her heat in 13.52. But USA’s Dior Hall looked the most impressive as she clocked 13.39 into a -1.6m/s headwind to win her heat. That time is a personal best for her over the 76cm hurdles, though it should be noted she has a superior 13.18 over the senior height hurdles.

Thompson’s and Hall’s team-mates filled the next two spots, Mikiah Brisco of USA running 13.73 to qualify and Rushelle Burton of Jamaica progressing with 13.78.

USA’s Ryan Clark won his 400m heat by more than a second, posting the fastest time of the day with a PB of 46.84. Kenya’s Ian Mutuku smashed his personal best with 46.85 to win his heat, but he was pushed all the way by Australia’s Samuel Baird, who ran a lifetime best of 46.97.

World youth leader Devaughn Baker of Jamaica easily won his heat with 47.58, but his compatriot Martin Manley was quicker, winning the sixth heat in 47.08.

The only sprint event of the morning session where a US athlete didn’t post the fastest qualifying mark was the girls’ 400m. Britain’s Sabrina Bakare ran a controlled 54.16 in the fifth heat. USA’s world youth leader Olivia Baker won her heat in 54.41, while Jamaican duo Tiffany James and Yanique McNeil also won their heats.

There were few surprises in the qualifying rounds of the field events. Chinese duo Xie Yuchen and Liang Xinyun were the best in the girls’ Discus. Xie led group B with 52.94m, farther than any other youth athlete in the world has thrown this year.

Anatoliy Ryapolov, who recently broke the Russian youth best in the Long Jump, lived up to expectations in qualifying, leaping a wind-assisted 7.73m to advance to the final. Brazil’s Samory Fraga jumped a PB of 7.66m to lead the other group, while Chinese favourites Fang Yaoqing and Zhong Peifeng also made it safely through.

But Ryapolov’s team-mate Maksim Iuniakin, one of the top jumpers in the world this year, failed to make it through after a foul in round one and a 6.40m effort in round two.

Australia’s Eleanor Patterson, the top-ranked youth girl in the world this year, ensured she qualified for the High Jump final with the least possible effort. Her only jump of the day, a first-time clearance at 1.74m, was good enough for joint 11th place overall.

Elsewhere, Ethiopia won both of the girls’ 1500m heats with world youth leader Tigist Gashaw running 4:18.55 and Dawit Seyaum clocking a PB of 4:14.40. Kenya’s Iveen Chepkemoi tried to stick with Seyaum and was rewarded with a PB of 4:17.81. Meanwhile, Japan’s Maki Izumida was Gashaw’s nearest challenger in the first heat, finishing more than two seconds behind in 4:20.60.

The boys’ Octathlon is a quarter of the way through and Norway’s Karsten Warholm currently leads. He posted the fastest time of the day in the 100m with 10.86 and the best mark in the Long Jump with 7.30m. World youth leader Santiago Ford of Cuba is currently down in eighth place after a disappointing 100m, running just 11.51. But he performed solidly in the Long Jump with 7.00m and has six more events in which to bank valuable points.