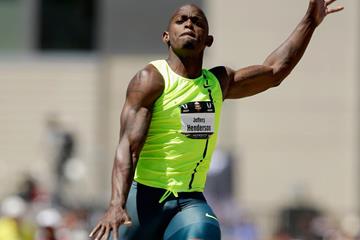 A breakthrough performance from long jumper Jeffery Henderson and an exquisite coming-of-age run from 20-year-old Ajee Wilson over 800m were the highlights on the final day of the US Championships in Sacramento, California on Sunday (29) – a session that drew 9601 fans to Hornet Stadium.

Prior to this weekend, Henderson’s personal best stood at 8.33m, but in the sweltering conditions yesterday – with temperatures exceeding 38°C – the 25-year-old leapt beyond that in all three of his measured jumps, his best effort of 8.52m coming in the final round.

The mark, while wind-assisted (3.5m/s), is the longest jump in the world this year under any conditions. Henderson’s second-round jump, a wind-legal 8.43m, moves him to fourth on the 2014 world list.

“I feel really good,” he said afterwards. “I think I did really well. My coach and I were focusing on my approach. I can jump 29 feet [8.83m] in ideal conditions. My fifth jump was actually longer than the last one, but it was a break.”

Out on the track, meanwhile, a young athlete of whom much has been expected delivered a coming-of-age performance to take the US title over 800m. In what was one of the most competitive fields, Ajee Wilson swept to the front 300m out, a position she refused to surrender all the way to the finish, which she reached in 1:58.70 – the third fastest time in the world this year. Oregon’s Laura Roesler was second in a PB of 1:59.04, with Molly Beckwith third in 1:59.35.

“We were about 57 for the first lap,” said Wilson. “I thought to myself: ‘just go. You’ve got the strength and endurance’. I’ve been working really hard.”

Wilson – a world junior champion in 2012 – will now pit herself against the world’s best on the European circuit, with immediate plans including the IAAF Diamond League meetings in Glasgow and Monaco.

In the men’s 800m, the favoured Duane Solomon quickly showed himself a class apart once the gun fired, speeding through the first 200m faster than 24 seconds and 400m in 49.66 seconds. “The plan was to take it out with authority,” he said afterwards, and that he certainly did.

Far from self-destructing, Solomon held it together well on the second lap and came home a clear winner in 1:44.30 ahead of Casimir Loxsom (1:45.97) and Erik Sowinski (1:46.94). “My next race will be Monaco, then I’ll have a whole month of training. I want to go back to Europe then and get the American record.”

In the women’s 400m hurdles, Kori Carter turned in one of the performances of the day, winning in 53.84, the second-fastest time in the world this year. Georganne Moline was a close second in 54.00 with Cassandra Tate third in 54.70.

“It was awesome,” said Carter. “I got a little shady over hurdles five, six and seven but then I just decided to go for it and got into Kori-Monster mode, gave it everything I had, and luckily today it was good enough.”

The men’s 110m hurdles provided the biggest shock of the day, with 19-year-old NCAA champion Devon Allen dipping for a surprise win in 13.16 ahead of world silver medallist Ryan Wilson (13.16) and world champion David Oliver (13.23).

Favourite Ronnie Ash crashed out mid-race in the final, having recorded the fastest time in the world this year to win his semi-final in 12.99 (+1.2m/s).

“I knew I was going to run fast,” said Allen. “Things started clicking in practice, I was feeling better.”

Another favourite to crash out was Bershawn Jackson, whose hopes of another US title were dashed as he fell to the track injured on the opening bend of the 400m hurdles final. Johnny Dutch was a convincing winner in 48.93, the national title proving a just reward for his decision to stick at the sport this season.

“This year has really been a journey,” he said. “I was on the verge of giving up, had so many personal things in my life and injuries. I really thought about quitting, but everybody had faith around me. I kept going, and finally it’s worked out. I had no strategy today. I just ran with my heart.”

Elsewhere, Jenny Simpson – a former world champion at 1500m – finally took her first outdoor US title at that distance, leading from gun to tape to comfortably hold off rising star Mary Cain, 4:04.96 to 4:06.34.

“I feel good at the front so I went there,” she said. “I wanted to slowly wind it up the whole way. It was really important for me to win today.”