McCorory holds off resurgent Richards-Ross to win US 400m title

It was the showdown they had all come to see on day four of the US Championships in Sacramento, and the duel between Francena McCorory and Sanya Richards-Ross over 400m duly lived up to expectation on Saturday (28), with both athletes smashing the 50-second barrier and offering up a race to remember.

In the end, it was McCorory who emerged victorious, the 25-year-old speeding off the home turn with a three-metre lead over Richards-Ross – a lead that dwindled but could never be clawed back entirely as the pair approached the line.

McCorory held her form brilliantly in the run to the finish, which she reached in a lifetime best of 49.48, making her the fifth-fastest US woman ever over the distance.

“I ran my lights out today,” said McCorory. “Starting out strong is what made the difference. I’m happy. I had an all-around great meet.”

The world indoor champion is now setting her long-term sights on the most ambitious of targets: Marita Koch’s 400m world record. “Hopefully before my career is out, I can break the world record. It’s 47.6, so I’ll have to be moving and grooving.”

Runner-up Richards-Ross was delighted with her return to form after some chronic injury problems in her foot, which still hamper her in training. “It went really well,” she said. “I got out hard, ran my curve better. I thought I had done enough, but Fran ran a phenomenal race. I’m really happy for her, winning her first national title, but next year is going to be a different story.”

In the women’s heptathlon, Sharon Day-Monroe continued where she left off on day one, consolidating her overnight lead with a 5.85m long jump, 46.84m javelin throw and a 2:11.54 800m to take victory with a total tally of 6470 points, the second-best score of her life to move to sixth in the world this year.

Barbara Nwaba took the runner-up spot with 6307, adding almost 300 points to her previous best, with Erica Bougard third with 6118 in an event which is part of the IAAF Combined Events Challenge.

“It feels awesome,” said Day-Monroe. “I have been making great progress in various events. My javelin went really well, just two feet under my own PR, but my best event was the hurdles. I have no plans to compete any more this year. I’m going to take a break, do some cross training and build up for Worlds and Olympics.”

In the women’s 100m hurdles, it was once again Dawn Harper-Nelson who reigned supreme, clocking 12.55 to edge Queen Harrison (12.56) into a -1.6m/s wind. Faced with an identical wind in the semi-final, Harper-Nelson went 0.01 faster in that round.

Lolo Jones, who has returned to sprint hurdling after a foray into bobsledding, finished third in 12.65. World champion Brianna Rollins was well below her best, finishing fifth in 12.81.

“It was a pretty good race,” said Harper-Nelson, the 2008 Olympic champion. “I had a good start, but in the middle of the race, I felt myself float over three of them. Sometimes you don’t have the best 10 hurdles, but it’s about putting it together as best you can.

In the field events, Brittney Reese was the standout performer – the 27-year-old taking the women’s long jump title with a best of 6.92m just days after the passing of both her step-father and grand-uncle.

“I’ve been out here jumping with a heavy heart, so I can’t complain,” she said. “I did what I could today. It’s a season’s best, but I have more in me. Once I get this week behind me, and see my family, I think I’ll be okay.”

Tianna Bartoletta led for the first half of the competition and put together an extremely consistent series, with five jumps of 6.80m or better, but ultimately finished second with a best of 6.86m.

In the absence of Lashawn Merritt, who withdrew ahead of Friday’s semi-final, Gil Roberts stepped into the limelight and took his first national title when winning the 400m in 44.53.

“I just tried to hit the curve and maintain technique throughout the last 100,” he said. “I was hoping I was going to get to race Lashawn today, but there were seven other great competitors out there.”

Olympic silver medallist Erik Kynard was an easy winner of the men’s high jump, his second-time clearance at 2.35m putting him comfortably clear of Nick Ross and Dustin Jonas, who tied for second with 2.28m. “It was really good,” said Kynard. “I have been harbouring an injury for the last three weeks, but I’m moving along and back in rhythm and progressing.”

In the women’s hammer, Amanda Bingson was a wide-margin winner, her best throw of 75.07m putting her well clear of Jessica Cosby in second (71.72m).

Leo Manzano waited until the home straight to unleash his trademark kick in the men’s 1500m to take the US title in a time of 3:38.63. Manzano covered his last 400m in 52.64 seconds to move from sixth to first. Pat Casey held on for second in 3:38.94, with Lopez Lomong rounding out the podium in third.

“It’s been the roughest time after losing my sponsor,” said Manzano, “but it’s a blessing to be back and win this title. The strategy was to be in front, but that didn’t work out. I made my move in the last 100 metres, and fortunately I was able to pull away.”

In the women’s 3000m steeplechase, Emma Coburn stamped her authority on the field just after halfway, quickly moving clear of the field, and she was duly rewarded with a US title along with a stadium and championship record of 9:19.72. Ashley Higginson finished a distant second in 9:27.59.

“With three-and-a-half laps to go, I kind of took off,” said Coburn. “When I saw my time at the end, I was really surprised. I’m not great in the heat. It shows that I’m in better shape.” 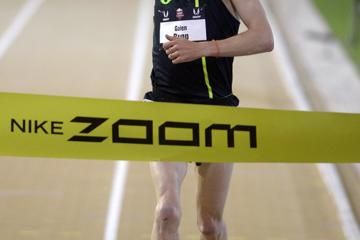 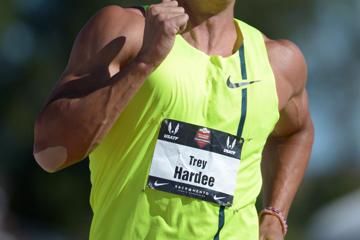 World leads from Hardee and Richards-Ross as ...