Eaton wins decathlon at US Olympic Trials with world-leading 8750

Ashton Eaton took a giant step towards his Olympic title defence after winning the decathlon at the US Olympic Trials, part of the IAAF Combined Events Challenge, on Sunday (3).

Eaton is sometimes easy to dismiss because his dominance has been so great for so long. His aim was to leave the trials on the team and healthy, and he did so. His winning score of 8750 has not been exceeded by anyone besides himself since 2009.

He started with a clear win in the 100m, clocking a season’s best of 10.34 (1.8m/s) to finish 0.2 ahead of two-time world champion Trey Hardee. Eaton was again top of the leader board in the long jump after sailing out to 7.84m.

Zach Ziemek moved up one place into second overall after leaping 7.72m. But Hardee, having battled injury all year, dropped to 15th overall after jumping 6.93m.

Eaton and Ziemek maintained their position after the shot put, the pair throwing 14.04m and 14.11m respectively. But Garrett Scantling shot up to third place overall after hurling his shot out to 15.97m. Hardee also made up significant ground, thanks to his effort of 15.68m.

For the first time in three years, Eaton surrendered his lead mid-way through a combined events contest. Jeremy Taiwo cleared 2.21m in the high jump, equalling the best ever mark achieved by a US man within a decathlon. He moved into the lead, 38 points ahead of Eaton who jumped 2.00m.

But Eaton returned to the top of the standings by the end of the first day as he sped around a lap of the track in 46.30. The world champion ended the day with 4560 points, 82 points ahead of Taiwo with Ziemek and Scantling in third and fourth respectively.

After struggling in the jumping events, Hardee slowed to a jog during the final 100 metres of the 400m, crossing the line in 72.49 to signal the end of his competition.

Eaton started his second day with a 13.60 clocking in the 110m hurdles, one of his fastest ever times within a decathlon. His only drama came when he botched his first discus attempt and walked through the ring for an intentional foul, but he ended with a respectable 41.39m.

Ziemek made up ground on Taiwo after throwing 48.17m in the discus and clearing 5.25m in the pole vault. He went into the 1500m in second place overall, but Taiwo’s endurance was simply too good and he regained his runner-up spot after clocking 4:17.35 in the 1500m, bringing his total to 8425.

Ziemek held on for third with 8413 while Garrett Scantling was fourth with 8228.

“Most decathletes are dealing with something,” added Eaton, who had missed significant training time after tearing his left quadriceps in late May. “It’s just the nature of the event.”

Roy Jordan and Jon Mulkeen for the IAAF 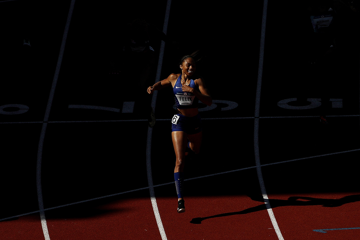 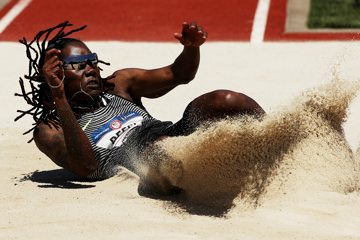