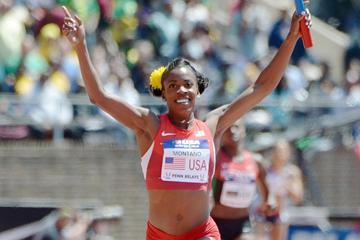 Alysia Montano celebrates the US triumph in the 4x800m at the Penn Relays (Kirby Lee) © Copyright
28 APR 2013 Report Philadelphia, USA

The US record in the women’s 4x800m Relay had stood since 1983. But that mark was broken by two teams in the same race at the 119th Penn Relays at Franklin Field in Philadelphia on Saturday (27).

Montano pulled away from Kenya’s Janeth Jepkosgei with a 1:58.6 anchor, thrusting both arms skywards as she crossed the line. Kenya finished second in 8:07.58.

The ‘USA Blue’ team of Phoebe Wright, Geena Gall, Alice Schmidt and LaTavia Thomas finished third in 8:10.58 also under the previous US record, while Great Britain in fourth (8:13.46) and Canada in fifth (8:14.85) also smashed their respective national records.

On the awards podium, the USA Red team was presented their winners watches by Sebastian Coe who was making his initial trip to the Penn Relays and visited with fellow middle-distance greats Kip Keino, Marcus O’Sullivan and Eammon Coghlan at the meet.

The record came as surprise for Montano, the veteran of the group who was training through the race and didn’t have her sights on an assault on the record which was set almost exactly 30 years ago at the Mt SAC Relays by a team that included Mary Decker.

“When you take down records and put yourself out there to push the limit, you’re setting yourself up for success,” said Montano. “I like to just go and race. To me, you can’t really think about times. You have to just go and compete and that’s exactly what we did.”

Wright and Marilyn Okoro of Britain led after the first leg, but Martinez put in a 2:00.6 split to give USA Red the lead at half way. With just the anchor to run, Kenya had moved into second place after World indoor 3000m champion Hellen Obiri made up a bit of ground on Wilson.

“I was definitely way more nervous than in high school,” said Wilson, the World junior 800m champion. “In high school I was confident, knowing I had a strong leg, when some of the other girls weren’t strong. I ran third leg and handed over the baton in first, so I was pleased.”

The triumph by the US women in the 4x800m Relay was among four victories in the six-race USA vs The World competition.

The Americans swept the men’s and women’s 4x400m Relays and won the men’s 4x100m Relay in the series that began in 2000, pitting the United States against other countries.

In the men’s 4x100m Relay, a team of Michael Rodgers, Justin Gatlin, Darvis Patton and Ryan Bailey timed 38.26, while in the 4x400m, a line-up of Torrin Lawrence, Manteo Mitchell, Bershawn Jackson and Tony McQuay won in 3:00.91.

McQuay held off a Jamaica’s Errol Nolan, who clocked an anchor leg of 44.3, to give the Americans the win. World champion Kirani James produced the fastest split of the day with his 44.1 on the second leg of a Caribbean all-stars team that included two-time Olympic 400m Hurdles champion Felix Sanchez of the Dominican Republic. 18-year-old Stephen Newbold, the 2011 World youth 200m champion, also impressed with his 44.4 anchor leg to give Bahamas third place.

Jamaica defeated two US teams to win the women’s 4x100m Relay in 42.46 with a team of Sherone Simpson, Kerron Stewart, Anneisha McLaughlin and Shelly-Ann Fraser-Price. A US team which featured three of the four members of the World-record setting quartet from the London Olympics with Tianna Madison, Allyson Felix and Bianca Knight finished third, narrowly beaten by the other US team, 42.65 to 42.66.

In an exciting women’s 4x400m Relay, Francena McCorory held off Great Britain’s Perri Shakes-Drayton to give the US victory in a world-leading 3:22.66, just 0.02 ahead of Britain, whose 3:22.68 clocking was their third-best ever performance. McCorory was timed at 50.3 for her anchor, while her team was also bolstered by the 49.9 split from Natasha Hastings on the second leg. But the fastest of the race came from Nigeria’s Regina George, who clocked 49.5 on the third leg for her team.

After finishing a disappointing ninth in the 4x100m Relay, Christophe Lemaitre won the 100m in 10.29. 2008 Olympic 1500m champion Nancy Langat won her first ever Mile race in 4:28.50 to go to ninth on the African all-time list, while Kenyan compatriot Jonathan Sawe won the men’s event in 3:57.03.

Derek Drouin was named the male field event athlete of the meet after winning the High Jump with a meeting record of 2.33m. The Olympic bronze medallist broke the stadium record of 2.32m that was set in 1976 by Dwight Stones.

Emily Lipari of Villanova was named the women’s relay athlete of the meet after a running the anchor legs on the winning 4x800m and Distance Medley teams.