Bolt wins in 10.05, but Harrison the star at Cayman Invitational

Usain Bolt opened his 2016 season by running 10.05 to win the 100m in virtually still conditions (0.1m/s) at the Cayman Invitational in George Town on Saturday night (14).

The 29-year-old Jamaican got off to a strong start, but trailed USA's Dentarus Locke at halfway. However, over the final 50 metres, as is so often the case, Bolt's longer stride and superior top-end speed soon carried him to the lead, and he was easing down by the time he crossed the line.

Three years ago – a season in which he went on to win triple gold at the IAAF World Championships in Moscow – Bolt also opened his season in George Town, running 10.09 to win the 100m.

Though he appeared unimpressed with his relatively modest winning time on Saturday, when set against that, it will be of little concern to the Jamaican, particularly given there is almost three months to go until the athletics programme gets under way at the Olympics in Rio de Janeiro.

"It didn't feel as smooth, but that was expected because it's my first race. I expected to be rusty. Once I get a few more races under my belt, by (Olympic) trials time I'll be ready."

Though Bolt was the star attraction for the fans, he was far from the standout performer on the night.

That accolade was earned in conclusive style by USA's Kendra Harrison, who once again proved a class apart in the women's 100m hurdles, winning in 12.42. The 23-year-old, who tops the world lists courtesy of her 12.36 run in Athens, Georgia, last month, powered away from her rivals from the outset and in near-still wind conditions (0.1m/s), she clocked the second-fastest time in the world this year.

Canada's Phylicia George was second in 12.74, with Virginia Crawford of the US third in 12.81.

US sprint star Jenna Prandini confirmed her good early season form when winning a sprint double on the night. Prandini took victory in the 100m in 11.16 from Jamaica's Kerron Stewart (11.20) and 2011 world champion Carmelita Jeter, who was third in 11.34.

Prandini has gone under 11 seconds already this year over 100m, having run a wind-legal 10.95 to win at the Mt Sac Relays in California last month.

She then returned a couple of hours later for the 200m, and powered around the bend and into the home straight with a clear advantage, one which only grew towards the finish, which she reached in 22.63. Jamaica's Audra Segree was second in 23.08.

Phyllis Francis was imperious in the women's 400m, coming home 10 metres clear of her competitors to record 50.71, marginally outside her personal best of 50.50.

Spencer Adams was one of the few not to make grievous errors in the men's 110m hurdles, and the US sprint hurdler was rewarded with the win, coming home in 13.48 ahead of Jamaicans Deuce Carter (13.65) and Tyler Mason (13.67).

Trinidad and Tobago's Machel Cedenio came from behind to take victory in the men's 400m from Jamaica's Demish Gaye, though his winning time of 45.10 was some way down on the 44.36 he ran to win at this meeting last year. 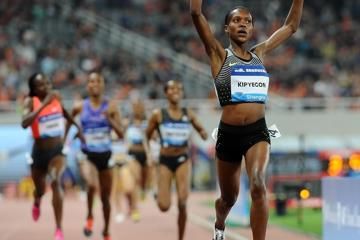 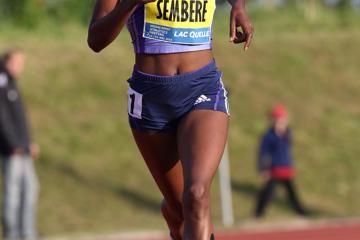