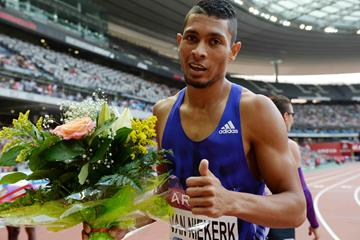 Wayde Van Niekerk made a little bit of history at the IAAF Diamond League meeting in Paris when he became the first African to run faster than 44 seconds for one lap of the track, when he ran 43.96 on Saturday (4).

The 22-year-old South African not only snatched his first victory in the Diamond Race but also announced himself as a genuine world title contender as he beat Olympic champion Kirani James, handing the Grenadian his first defeat of the year and moving up to 10th on the world all-time list for the event.

With van Niekerk on his outside, James strained every sinew in lane four to make up ground in the home straight but had to settle for second in 44.17.

US champion David Verburg was well back in third in 44.81.

On a night of five world leads on the track but a series of disappointments for the French fans, at least sprinter Jimmy Vicaut was able to send the crowd home happy after matching the European 100m record.

The latter clocked 9.81, his quickest time for four years, to win a race that was meant to feature his fellow Jamaican Usain Bolt.

Mike Rodgers took third for the USA in 9.99, ensuring three men ran faster than 10 seconds for seventh time this year.

Vicaut’s area record was the third of the night, following van Niekerk and Evan Jager, who set a North American record in the men’s 3000m steeplechase.

The results of the steeplechase will show another world lead for 2014 Diamond Race winner Jairus Birech as the Kenyan notched up another victory, but the bald facts don’t tell half the story.

Birech was well beaten before the final barrier by the outstanding Jager who had kicked away over the last 600 metres. Just as the US champion looked as if he would claim a famous victory, he clattered the last hurdle and tumbled flat on the track, allowing his long-time shadow to streak past for an unlikely victory in 7:58.83, a meeting record and the night’s first world-leading performance.

How close Jager came to claiming that mark for himself. He had dragged Birech away from the rest with three laps to go and opened a five-metre lead with 600 metres left.

Birech closed briefly before the bell but the US athlete was having the run of his life and streaked away down the back straight and over the final water jump.

But just when he had the finish line in sight, his form failed him.

The pony-tailed runner earned a good consolation prize, though, as he picked himself up to finish second in 8:00.45, smashing his own US and North American records.

“The stupid mistake cost me the sub-eight minutes, one of my big goals,” rued Jager afterwards.

“Of course, I’m happy I made the Kenyans worried. I train for that. Today, I proved I can compete for the top position at the World Championships.”

There were two more world leads just a few minutes later as the ever consistent Eunice Sum took her 800m personal best down below 1:57 for the first time, and the irrepressible Shelly-Ann Fraser-Pryce blasted to 10.74 in the 100m, 0.05 quicker than her Jamaican Championships win a week ago and just 0.04 away from her national record.

The Kenyan followed the Belarusian pacer to 500m before kicking for home, chased by Cuba’s Rose Mary Amanza who also ran a personal best with 1:57.70.

Selina Buchel took more than two seconds from her best when runnng a Swiss record of 1:57.95 in third while, in what was surely the best 800m of the year so far, there were bests as well for the US pair of Molly Ludlow in fourth and Chanelle Price in fifth, with 1:58.68 and 1:59.10 respectively.

Fraser-Pryce was pressed hard by Blessing Okagbare who had beaten her easily in Shanghai back in May.

This time the Jamaican was more than a match for the Nigerian and thrust ahead to win by 0.06. USA’s English Gardner was well beaten into third in 10.97.

The crowd barely had time to catch breath before another world lead fell in the men’s 1500m as Silas Kiplagat outkicked Ayanleh Souleiman to take his second IAAF Diamond League victory of the year in 3:30.12.

The Djibouti runner was just 0.05 behind his Kenyan rival while Ronald Kwemoi dipped ahead of Olympic champion Taoufik Makhloufi, 3:30.43 to 3:30.50.

Orlando Ortega produced his first sub-13-second performance to win the men’s 110m hurdles in yet another world-leading time.

The Cuban came late to overtake David Oliver on the line in 12.94 as the world champion also dipped under 13 seconds for the first time in 2015.

He thrust his chest out to stop the clock at 12.98 while Sergey Shubenkov took 0.03 from his own Russian record in third with 13.06.

Zuzana Hejnova looked to be approaching her pre-injury form from two years ago in the women’s 400m hurdles. The Czech world champion ran a season’s best and fell just short of the world lead with 53.76.