Chebet picked up from where she left off to add Kericho top honours to her collection following her successes in the opening three meets of the series in Nyahururu (November 3), Machakos (November 10) and Kisii (November 17).

The junior races were dominated by Agnes Chebet, who finally bagged the bouquet in the women’s 6km event, and newcomer Ronald Chebolei who stopped pre-race favourite Emmanuel Kiprono Bett in the men’s 8km.

Following the conclusion of the 2012-13 domestic series, attention now turns to the institutional and county championships that will pave way for the KCB National Cross Country Championships – an IAAF Cross Country Permit meeting – in Nairobi on February 16.

Chebet signs off in style

When Emily Chebet rose to global acclaim in 2010 by becoming the second Kenyan woman to beat compatriot Linet Masai to World Cross gold, many envisioned it would be the start of her domination.

However, injury and lack of form saw her plummet from the global radar until Cape Town last year when she returned to the podium at the African Cross Country Championships with bronze.

She missed the London Olympics by a whisker after placing fourth at the Kenyan Trials over 10,000m, but when the starting gun for the domestic cross-country season went off in Nyahururu in November, Chebet exploded back on to the scene.

After sealing her hat-trick in Kisii a fortnight later, Chebet retreated to recharge her batteries for the perfect sign off which she delivered at the Kericho Technical Training Institute in the series finale on Saturday.

“I’m preparing for the World Cross in Poland where I became the champion in 2010,” she said. “It is my wish and inspiration to train so hard this season after being disappointed by injury that saw me miss Spain.

“Getting in the Kenyan team is hard and that is why I decided to compete at home this season so that I can have all the energy for the championships,” added the administration police officer who made her World Cross debut as a junior in 2003.

She clocked 27:36 to win in Kericho in what was a highly competitive race from the start as she delighted in splashing the field with gold dust in her home town.

Jane Moraa Onyangi from Kisii was second with a time of 28:05 with Beatrice Chepkemoi completing the podium (28:09).

For the third time in the series, Hosea Macharinyang – who is bidding for an eighth World Cross appearance – was forced to accept the bridesmaid role as John Mwangangi triumphed.

Like Peter Matelong before him in Nyahururu and Embu (December 22), Mwangangi outsprinted the veteran to complete a close triumph (36:56 to 36:57) as World Marathon Majors winner Geoffrey Mutai proved his pedigree in soft-surface running by placing third in 36:58.

The Kericho sun shone on another Chebet, this time the budding junior talent Agnes whose podium consistency was capped by victory in the junior women’s 6km race.

After placing second in Embu and third in the penultimate round in Eldoret, Chebet finally prevailed over a strong field in 20:02, out-smarting a field that included the World junior champion on the track and cross-country, Faith Chepngetich Kipyegon, as well as fellow World junior champion, Mercy Chebwogen.

Roseline Chepngetich repeated her second position from Embu, clocking 20:41, while Kipyegon was third in 20:49.

In the men’s junior 8km, Ronald Chebolei emerged the surprise winner by charging away from Eldoret winner Emmanual Kiprono Bett  (24:17) and Katui Muia (24:24) who lined up alongside the victor on the rostrum.

With a share of the $14,118 (Ksh1.2m) series jackpot up for grabs Kericho was the designated finale of the competition with Chebet, Macharinyang, Bett and Roseline Chepngetich accumulating the least points to earn $2,353 (Ksh200,000) a piece. To qualify, athletes needed to place among the top six in three of the six rounds as well as the final. 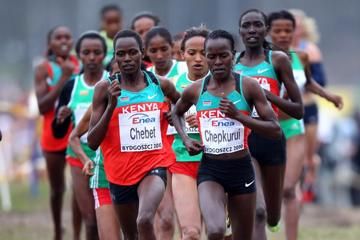 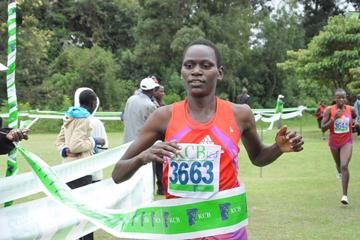 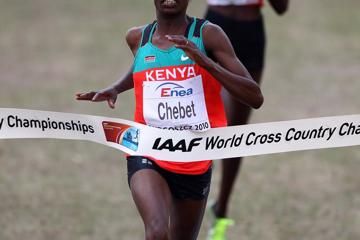 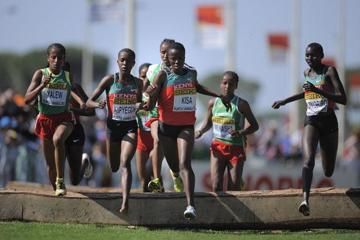 Kibet surprises the locals in Eldoret as Kipy...