Zersenay Tadese lived up to his moniker of 'Mr. Half Marathon’ after collecting his fifth World road running title at the 20th World Half Marathon Championships in Kavarna, Bulgaria, today.

Running at the front from just beyond the five-kilometre point, the 30-year-old Eritrean romped to a 1:00:19 performance to win by a whopping 32 seconds, an impressive clocking given the hot and humid conditions that took their toll on several athletes racing through the streets of this Black Sea coastal town of 12,000. But the temperatures that hovered near 30 C (86 F) under the burning sun, along with 85 percent humidity did little to stand in the way of Tadese’s return to top of the podium after a runner-up finish in Nanning two years ago halted his streak of four successive titles.

"But it was a tough race, I was very tired from the travel." Flight delays forced Tadese and his teammates to spend a night at a terminal in Vienna Airport before finally arriving in Kavarna at 2 p.m. yesterday. If was weary, he certainly hid it well.

Kenyan Philemon Limo led a tight pack of some thirty runners through the first five kilometres in 14:22, but soon thereafter Tadese moved to the front to up the tempo to take command. For good.

Just twenty minutes into the race, it was just Tadese, Limo and his Kenyan teammate Eliud Kipchoge and Pius Kirop at the front but any notions that the quartet would engage in a competitive contest were short-lived.

With less than 25 minutes on the clock, Tadese surged again and later clearly laid out his ambitions when he covered the 10 kilometre split in 28:05, seven seconds ahead of Limo whose occasional grimaces were already showing signs of trouble. Tadese’s covered the second five kilometres in a blazing 13:45, one of the fastest splits ever in a Half Marathon. Kirop was next a further four seconds back, with Kenyan John Nzau Mwangangi (28:24), Kipchoge and Ethiopian Deressa Chimsa (28:25) rounding out the first six. Showing no signs of wilting, he forged on, cushioning his lead.

AC/DC’s Dirty Deeds Done Dirt Cheap was blaring as he reached 15 kilometres in 42:16, a whopping 29 seconds ahead of Kirop, who in turn was eight seconds ahead of Mwangangi. Chimsa was another eight seconds back but running well ahead of Limo and Kipchoge, who were both showing signs of struggle. Limo, unable to regroup from his 13:50 second five-kilometre stretch, wouldn’t reach twenty kilometres.

The only question remaining was whether Tadese would break the 60-second barrier; when he went through twenty kilometres in 57:11, it appeared it wouldn’t be. He was nonetheless 33 seconds ahead of Chimsa at that point, with the victory all but secured.

Over the final stretch the Ethiopian reduced the gap by just one second, crossing the line in 1:00:51, a career best for silver.

"It was a very hard competition," said the 35-year-old veteran who has 2:05:42 Marathon credentials. "The humidity was incredible. Together with the heat it made it very difficult. I also did not expect such an early attack from Tadese."

The winner was hoping to catch his rivals off guard. "With my coach we planned to push the pace after the first five K, but it was tough in the heat. I managed okay."

"Tadese surprised all of us," said Kipchoge, whose 59:25 debut over the distance early last month made him a podium favourite here. "He made a break very early and caught us by surprise."

Tadese also had a nice surprise for the organisers of the next edition of the Championships, which will be held in Copenhagen, when asked if he’ll defend his title in 2014.

Tadese, along with Tewelde Estifanos and Kiflom Sium who finished ninth and tenth, lead Eritrea to its sixth consecutive team silver, with Ethiopia taking bronze for the third straight Championships. The U.S., led by Augustus Maiyo’s 15th place showing, was a distant fourth. 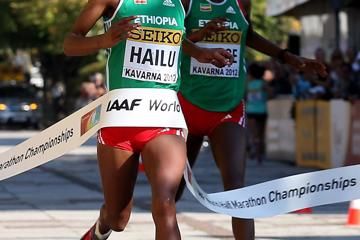