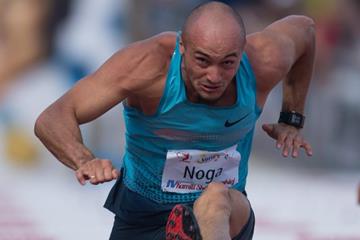 At the Warsaw meeting held in memorial of 2000 Olympic Hammer champion Kamila Skolimowska, it was no surprise that many of the highlights came in the throwing events, but there was also a record-breaking performance on the track from sprint hurdler Artur Noga on Sunday (25).

Earlier this month the 25-year-old missed out on the 110m Hurdles final at the IAAF World Championships in Moscow by just one hundredth of a second. But on home soil in Warsaw, he was a clear winner, crossing the finish line more than a quarter of a second ahead of Hungary’s Balazs Baji.

Noga’s time of 13.26 was a Polish record. The previous mark of 13.27 had stood to Artur Kohutek since 1997 with Noga tying it last year. The similarities between the two athletes do not end there, though.

Both Kohutek and Noga finished fifth in their first appearance at the European Championships before improving to third at the following edition; Kohutek taking bronze in 2002 and Noga doing likewise 10 years later in Helsinki. The pair have also twice made it to the semi-final stage of the World Championships.

Hammer victories for Wlodarczyk and Pars

In both Hammer contests in Warsaw, the World silver medallists once again avenged their defeats from Moscow.

At last week’s Athletic Bridge meeting in Dubnica nad Vahom, World champions Pawel Fajdek and Tatyana Lysenko were respectively beaten by Krisztian Pars and Anita Wlodarczyk. The finishing order was the same again in Warsaw as Pars triumphed with a fourth-round throw of 80.43m with Fajdek half a metre behind with 79.92m. Lukas Melich, who finished third in Moscow, occupied the same position in Warsaw with 77.01m.

Lysenko took an early lead in the women’s competition with 70.90m in round one, but it was short-lived as Wlodarczyk sent her Hammer flying out to 75.78m in round two. That remained the best mark of the day, but she followed it with two more throws past the 75-metre mark. Any of her five best throws would have easily been enough to defeat the Russian.

Germany’s three-time World champion Robert Harting notched up another victory in the Discus over long-time rival Piotr Malachowski of Poland. The Olympic champion’s opening throw of 68.60m was easily enough to win as Malachowski’s best effort on the day was 67.07m.

There was a minor surprise in the men’s Shot as European indoor bronze medallist Ladislav Prasil defeated World bronze medallist Dylan Armstrong. The 23-year-old from the Czech Republic led from the outset with 20.96m in round one before improving in the fifth round to 21.09m, the second-best mark of his career.

For a brief moment it looked as though Canadian record-holder Armstrong had snatched the victory with his final attempt, but it was just a few centimetres short at 21.02m. Prasil, who finished fifth at the World Championships, ended his series with one more effort past the 21-metre barrier with 21.01m.

All but one of the sprinting events in Warsaw were won by Jamaican athletes. The exception was the men’s 100m, which was won by USA’s Mike Rodgers in 10.06 over Kim Collins, who clocked 10.19.

Arguably the best track performance of the day came from Carrie Russell in the women’s 100m. The first-leg runner for the victorious Jamaican 4x100m team in Moscow, Russell set a PB of 11.01 to win comfortably from team-mate Natasha Morrison, who clocked 11.19.