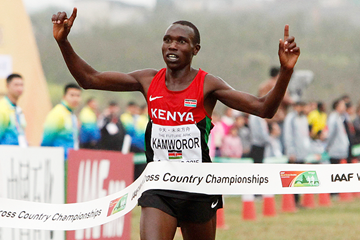 Geoffrey Kamworor enhanced his reputation as a runner for the big stage as he maintained his unbeaten championship record at the IAAF World Cross Country Championships, Guiyang 2015 on Saturday (28).

Using his trademark front-running tactics, the 22-year-old Kenyan added the senior men’s cross-country title to his junior title from four years ago, and his world half-marathon title from Copenhagen last year.

Kamworor’s game plan was clear from the start: run the finish out of 5000m specialists Muktar Edris and Hagos Gebrhiwet from Ethiopia, as well as compatriot Bedan Karoki, who outran Kamworor in the last 800 metres at the Kenyan Trials in Nairobi last month.

The underfoot conditions remained firm for the 11,870m senior men’s race, and the rain which was forecast for Guiyang stayed away for the entirety of the programme, almost certainly helping Kamworor and Karoki who have both expressed preferences for firm terrain in the past and are also accomplished road runners.

The theme from the first three races was continued in the blue-riband event of the programme as the Kenyan trio of Kamworor, Karoki and Philip Langat, the in-form runner on the domestic Kenyan cross-country circuit, pushed the pace in the early stages while the Ethiopians sat back in the leading bunch.

Kamworor was the first to show at the top of the first ascent in the opening 400 metres of the opening lap, and the world half-marathon champion was seldom out of the top two for the rest of the race.

The first two laps, completed in 5:40 and 5:50 respectively, were largely uneventful but relentlessly fast pace ensured that the leading pack was whittled down in size on the third lap, completed in 5:43.

Bahrain’s Albert Rop was the only non-Kenyan to take the lead with any conviction but the Kenyan duo of Kamworor and Karoki – who was wearing his lesser-known second name Muchiri on his bib – soon re-assumed the pace-making duties midway around the third lap roughly five kilometres into the race.

Much of the Ethiopian challenge for the medals started to falter at this point as 2013 junior winner Gebrhiwet, who has been sick and injured this winter and has only raced once since the summer track season, began to drop out of medal contention. Trials winner Tamirat Tola, a 2:06:17 marathon runner, moved ahead of Gebrhiwet but he couldn’t latch on to a leading trio of Kamworor, Karoki and Edris who began to pull clear towards the end of the fourth lap in 5:45.

Kamworor’s attritional tactics soon began to pay dividends. At the start of the fifth lap, a small but noteworthy gap opened up between the leading Kenyans and Edris, whose sixth-place finish at the Ethiopian Trials clearly wasn’t a harbinger of his current form.

Running side by side for the most part but unafraid to put in the occasional surge on an especially twistin and rhythm-sapping course, Kamworor and Karoki maintained their pace but it was testament to Edris’s fighting spirit that he managed to withhold the Kenyan onslaught for the best part of a lap.

Going into the last lap, with the clock reading 28:50 with the fifth lap completed in 5:52, Edris was still within one second off the Kenyans but the damage was done in the next kilometre and the gap between the Kenyans and Edris – the fastest runner in the world over 5000m last year – had extended to 20 metres for the first time.

Kamworor’s tactical performance suggested he was acutely aware of Karoki’s superior sprint finish as the 22-year-old, who largely plies his trade as a marathon runner these days although he has the 10,000m at the IAAF World Championships as his target this summer, was the most insistent in pushing the pace after dropping Edris at the start of the final lap.

Kamworor initially held off Karoki – who will also be looking to make the Kenyan team over 25 laps of the track in Beijing – as the latter tried to pass him on his inside.

Even with 400 metres remaining, it was still impossible to separate the leading Kenyans. Second and first at the Kenyan Trials last month, the order was reversed after Kamworor unleashed some unexpected but dazzling pace over the last 300 metres to fend off the Japan-based Karoki, who was making his debut at the IAAF World Cross Country Championships.

On the other hand, Kamworor is no stranger to the cross-country terrain as he added the coveted senior title to his junior title from four years ago.

Kamworor crossed the line in 34:52 and such was his closing pace, he finished eight seconds ahead of the arguable pre-race favourite Karoki.

Despite some palpable competitiveness in the last kilometres when Kamworor blocked off Karoki, the gold and silver medallists embraced after the finish.

"We are rivals when we are racing, that is competition, but friends when we are not," said Kamworor, with Karoki nodding in ascent at the post-race press conference.

Edris wrapped up the bronze medal in 35:06 while Gebrhiwet rallied to finish fourth ahead of another Japan-based Kenyan, Leonard Barsoton, with Tola sixth.

The team standings couldn’t have been closer with Ethiopia and Kenya both finishing with 20 points but the Ethiopians secured the title under the tie-break rules by dint of the fact their fourth counter Atsedu Tsegay finished seventh while the fourth counter for Kenya – Langat – was 12th.

Led by Aweke Ayalew in 10th, Bahrain claimed their first ever medal in a men’s event at the World Cross Country Championships with bronze in the team race.