World leads from Aregawi, Rupp and Dibaba in Stockholm

The 24th edition of the XL Galan, an IAAF Indoor Permit meeting, at the Stockholm Globe Arena on Thursday (21) was filled with brilliant performances and was just 12 hundredths from a perfect conclusion.

That was the meagre margin by which Abeba Aregawi in her first race this winter – as well as her first race representing Sweden – missed the 1500m World indoor record.

As has been the tradition at this meet throughout the years, it was the middle and long distances that provided most of really spectacular performances, and they produced five of the six world-leading marks.

Although there were five other world-leading marks, the lasting image of the 2013 XL Galan will be of Abeba Aregawi floating effortlessly around the track at World record pace for seven-and-a-half laps.

Ethiopia’s Mohammed Aman set the tone at the beginning of the evening with an inspired 800m race where he was the only one who dared to follow the pacemaker. Once he was alone, he pushed relentlessly to the finish line to win in 1:45.05, improving the world-leading time by more than a second and his own national record by 0.35. Just seven tenths outside the World indoor junior record, it was the third-fastest performance ever indoors by a junior athlete.

One-and-a-half seconds behind the winner, Poland’s Adam Kszczot strengthened his position as the favourite for the European indoor title next weekend by leaving the chasing group a second behind on the last lap.

Dibaba and Rupp impress in 3000m

The women’s 3000m also turned into an impressive exhibition by one runner from Ethiopia. After two impressive wins at 1500m previously this winter, Genzebe Dibaba turned her attention to the 3000m and it soon became clear she was a woman on a mission – with her mission being to challenge Meseret Defar’s World indoor record!

The men’s 3000m also saw a meeting record broken that had previously belonged to another Ethiopian legend, Kenenisa Bekele. The target for the pacemakers was to pile on 30-second laps for as long as possible and they did a very good job at that, passing halfway at 3:46.

When the race for the win began in earnest at 2000m, the clock showed 5:02 for the top duo of Kenya’s Caleb Ndiku and US Olympic silver medallist Galen Rupp. In the last few laps it was Rupp leading way, gradually increasing the pace and inching away – 29.5, 29.0 and 28.3.

He had said before that his main ambition was to win and to work on his finishing speed and he certainly achieved those objectives. He won by one-and-a-half seconds and his winning time of 7.30.16 broke the US indoor record (7:32.43) by more than two seconds.

The only middle-distance event that ended up slightly disappointing was the one that had been most anticipated in advance – the men’s 1000m. Only Ayanleh Souleiman of Djibouti followed the pacemakers, even though the pace was nothing exceptional (53 at 400m, 1:21 at 600m, 1:49 at 800m).

The winning time 2:17.05 was of course a world-leading mark but the World record challenge never materialised. Just like in the 800m it was a runner from Poland – here Marcin Lewandowski – that in the closing stages left the pack to take second. And had he started his kick a little earlier, he could have caught the tiring Souleiman.

It wasn’t just the middle-distance runners who provided world-leading marks. In the women’s Pole Vault, Britain’s Holly Bleasdale had a technical off-day. After 4.45m she had three clear failures at 4.64m and had to be content with fourth place. She then witnessed her world-leading mark being bettered by Cuba’s Yarisley Silva with a neat clearance of 4.78m.

With Silva being the only non-European in the field, the event was also very much a rehearsal for the upcoming European Indoor Championships. Bleasdale will remain the favourite but both Russia’s Anastasiya Savchenko, who set a PB of 4.71m here, and Czech Republic’s Jirina Svobodová, clearing a season’s best of 4.64m, proved that they will provide tough opposition.

As expected, the star of the 60m was Shelly-Ann Fraser-Pryce who, in her second ever indoor competition, lowered her 60m PB by five hundredths to 7.04. The two-time Olympic champion won by one-and-a-half metres from Ukraine’s Mariya Ryemyen who, with 7.17, underlined her medal ambitions for the upcoming European Indoor Championships.

But in this race many spectators focused their attention on Sweden’s new teenage sprint sensation, Irene Ekelund. Nine years younger than the next youngest in the field, she finished a respectable fourth and lowered the Swedish junior record – that had been set by Linda Haglund in 1974, 23 years before Ekelund was born – by one hundredth to 7.32. It is also a European age-15 best.

Over the last two years local favourite and Olympic fourth-placer Michel Tornéus had won the Long Jump at the XL Galan, jumping season’s bests on both occasions. He kept that tradition going and in the third round he flew out to 8.20m, equalling the Swedish indoor record set by Mattias Sunneborn in 1995. Sunneborn, now aged 42, was 12th here with 7.38m.

The women’s High Jump was carried out with World indoor record-holder Kajsa Bergqvist a keen observer in the stands and she saw one of her ‘old’ opponents – Belgium’s 2008 Olympic champion – Tia Hellebaut once more proving her strength as a competitor.

After making 1.92m on her third attempt Hellebaut was in second place behind Sweden’s Emma Green Tregaro when the bar was raised to 1.95m. But the Belgian turned the tables by clearing 1.95m on her first attempt before three unsuccessful tries at 1.98m.

The 400m races didn’t provide extraordinary times but they were highly competitive. In the men’s race, Trinidad’s Olympic bronze medallist Lalonde Gordon looked laboured in the opening stages and Czech Republic’s Pavel Maslak didn’t miss his opportunity. He grabbed the lead after the first lap and was determined never to relinquish it, winning in 46.34. Gordon was in third after 200m and didn’t have the strength to improve that position.

In the women’s race local favourite – and 2012 European champion – Moa Hjelmer took the early lead but on the last lap she had to let both USA’s Ebonie Floyd and Czech Republic’s hurdles specialist Zuzana Hejnova pass by. All three dipped under 53 seconds, as did Czech Denisa Rosolova in the B-final.

Lennart Julin for the IAAF 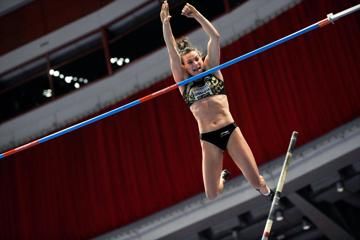