World Athlete of the Year and pole vault superstar Renaud Lavillenie was again in fine form at the final meeting of the Perche Elite Tour, leaping a world-leading height of 6.01m in the French town of Nevers on Saturday night (7).

He cleared 6.01m on his third attempt, after having gone straight over 5.70m and then 5.87m with his first efforts, before keeping the crowd on their seats with three unsuccessful attempts at a world record 6.17m.

"It was a rather successful evening. I missed the record but I made some nice attempts. I feel I can do it. I used the same pole when I broke the record. This is a good sign," Lavillenie told local reporters.

It was his best performance since his world record 6.16m in Donetsk, Ukraine, last February, and the ninth competition in his career over 6.00m or better.

Lavillenie’s brother Valentin cleared a personal best of 5.80m for second place while Brazil’s 2011 world champion Fabiana Murer won the women's competition with another world-leading mark of 4.83m, adding one centimetre to her own South American indoor record, with French record-holder Marion Fiack a distant second with 4.50m.

Elsewhere in France, at the Meeting D’Athletisme Mondeville, Dimitri Bascou continued his fantastic start to 2015 by reducing his own 60m hurdles world-leading time and personal best to 7.51.

Ethiopia’s Axumawit Embaye was a class apart in the 1500m, clocking 4:07.07. St Kitts’ evergreen Kim Collins wasn’t as fast as his recent outings but still clocked 6.58 for a clear win in the 60m over Antigua’s Daniel Bailey, who was second in 6.63. 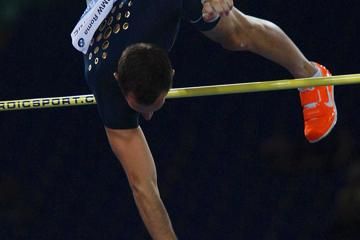 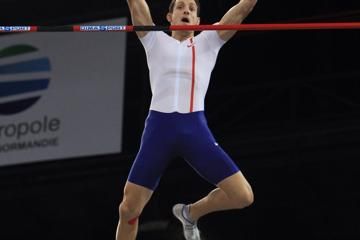