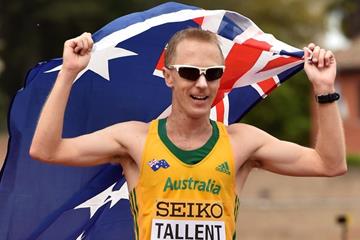 Alex Schwazer wore the same style sunglasses as the Terminator while winning the 50km at the IAAF World Race Walking Team Championships Rome 2016, and – like the movie character’s immortal phrase – made clear he was back.

The 2008 Olympic champion, returning from a four-year doping suspension, took the race by the scruff of the neck between 25km and 30km and forge an unbeatable gap that grew and grew.

By 41km it was 1:35 on lone chaser Jared Tallent and the Italian was rewarded for his literal bold steps to breast the line back on the track next to the course in the centre of Rome.

Schwazer did the damage with three near 21:30 five-kilometre splits from 25km to 40km that varied by just a second.

In contrast, the Australian multiple major championships medallist had a relatively tough 5km leading up to 40km when he posted 22:11, helped little by losing the one other trying to reel in the leader.

Han Yucheng, with a personal best of 3:36:20, didn’t just slow at 39km; the Chinese stopped dead in his tracks.

Remarkably, a few seconds earlier Han had a final dig at getting away from the Australian, and Tallent even moved aside to let the 37-year-old through on the inside at a turn.

But in less than 200 metres, that desperate feeling 50km race walkers get when all goes to pot hit Han like a hammer.

He slowed to the same pace as strolling tourists, and Tallent was left to chase alone. Han decided that even limping was not for him and called it a day.

It allowed Italy’s Matteo Giupponi, long since dropped, to move back into a medal slot – but even then not for long.

Even further back Italian teammate Marco de Luca looked as if he would be buried in the middle of the field. But he came again to take up third and maybe start a trend for medical tape on leg and shoulders in national colours.

The green, white and red in the healing strips strapped to the Italian mirrored the country’s flag perfectly, and with some justification: his country comfortably took the team prize.

However, De Luca became yet another victim of a race walker coming up the inside.

Igor Glavan went up a couple of gears to pass the tiring Italian and storm down the home straight for bronze and claim Ukraine’s seventh medal at the past three editions after his country also won team silver.

Glavan sunk to his knees in gratitude at the line, but his country’s rise as a race walking force is indisputable.

The first 20km was the usual cagey affair and the lead switched back and forth.

But then Schwazer decided it was time to make a return statement and pushed on. First to blink was Han, caught between a rock and a hard place.

A turn at the top of the course made it clear the Italian was getting away, and so the Chinese kept looking behind him hoping for help.

None was forthcoming, and by 30km the gap had grown to 28 seconds and extended to 50 seconds after 35km.

There was no limitation on the damage after that, and the biggest crowd of the two days were understandably at the track finish to cheer Schwazer over the line.

The home joy was apparent when a media scrum surrounded the Italian while Glavan walked through the media zone untroubled to re-join his happy teammates.

Tallent took his eighth incredible medal at 50km since 2008, and then revealed he was plagued by hamstring trouble over the past six months.

“I’m reasonably pleased to have walked like I did, bearing in mind my training has been compromised, and yes, I see this as a positive stepping stone towards the Olympics and Rio.

“But as a battle between Schwazer and myself? If the Russians are readmitted to athletics, they’re always competitive, and there is Yohann (Diniz) and Matej (Toth) who aren’t here,” he said.

The winner admitted the modest tempo at the beginning played into his hands.

“The race was a bit strange,” added Schwazer. “At the beginning we couldn't find a good pace.

“In the end it went really, really well and I'm very, very satisfied. I am going to really savour it today and tomorrow and think about the next races.”

Glavan was glad that his previous fourth-place finishes at World Championships finally turned into a medal – especially a day after the 80th birthday of Ukrainian and Olympic hero Vladimir Golubnichiy to go with the chance to stand next to Tallent at the medal ceremony.

“We have a strong coach and a strong tradition with Golubnichiy," Glavan said. "The circuit was not normal and not round and it was both difficult and interesting.

“Jared Tallent is my idol because he is a very strong sportsman and I am happy to be next to him during the ceremony.

“At 44km I saw my team, my coach and they spoke to me and told me I was in a good position and I could have a medal,” he said. “It gives me hope for the Olympics.”

Having struggled during the middle stages, De Luca came through to take fourth place while teammate Teodorico Caporaso finished strongly to place fifth. Their pair set respective PBs of 3:44:47 and 3:48:29. With three athletes in the top five, Italy also won the team title.

USA's Erin Talcott, the first woman ever to contest the 50km at this championships, crossed the line in 40th place in 4:51:08.