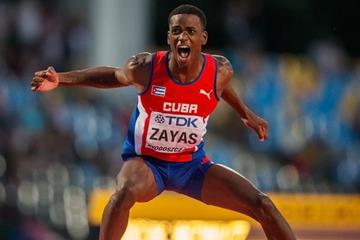 Nearly 30 years to the day after Javier Sotomayor won the inaugural world U20 title in Athens, Luis Enrique Zayas became just the second Cuban winner of the event with an immaculate display of jumping in Bydgoszcz.

The 19-year-old didn’t display any nerves on his championship debut, clearing eight successive heights from 2.05m to 2.27m on his first attempts to claim the title ahead of world U18 bronze medallist Darius Carbin from the United States.

In an absorbing contest, Carbin kept his gold medal hopes alive by clearing lifetime bests of 2.23m and 2.25m on the third time of asking before three unsuccessful attempts spread across 2.27m and 2.29m.

Having matched Sotomayor’s accomplishments at U20 level, Zayas is hoping to emulate the great Cuban’s performances at senior level.

“Now I just want to keep jumping and break a world record in the future,” said Zayas after becoming the third Cuban to win a men’s jumping event this week in Bydgoszcz.

An emerging force in the vertical jumps, Qatar claimed another global medal courtesy of Mohamet Allamine Hamdi, who cleared 2.23m to claim the bronze.

The 19-year-old was born in Saudi Arabia but moved to Qatar to pursue his sporting career. Hamdi shares the same coach as Mutaz Essa Barshim and has benefitted from training trips to Poland and Sweden alongside Barshim.

“In the future I want to keep pushing and I know with Mutaz’s support, I can do something,” he said.

World U20 leader Jah-Nhai Perinchief was tipped to claim Bermuda’s first ever World U20 Championships medal but the US-based jumper finished down in seventh with 2.18m.