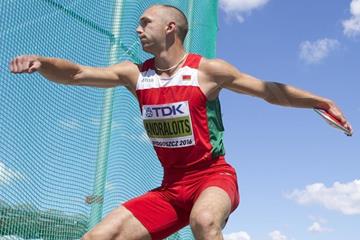 Andraloits in pole position after second morning in Bydgoszcz

The second morning of action at the IAAF World U20 Championships Bydgoszcz 2016 on Wednesday (20) saw a host of leading sprinters take to the track for the first time, while the men’s decathlon progressed towards what is set to be a nail-biting finish.

After seven events of the men's decathlon, there is still little to choose between medal favourites Niklas Kaul and Jan Ruhrmann of Germany and Belarus’s Maksim Andraloits.

German duo Kaul and Ruhrmann can be expected to shoot up the standings during the final two events, however. Kaul, who is an extremely strong second-day performer, is currently in third place on 6448 points, having run 14.72 in the 110m hurdles, just 0.01 off his personal best, and thrown the discus 41.80m this morning. In the afternoon the world U18 champion soared over a PB of 4.80m to move from seventh to third.

He is a 67-metre javelin thrower at his best, so should move himself back into title contention during the ninth event this evening. Ruhrmann currently sits fifth on 6342 points after running 15.11 in the 110m hurdles this morning before a best discus throw of 45.95m. He then cleared 4.30m in the afternoon's pole vault.

Home heroine Ewa Swoboda was fastest in the women’s 100m heats, the world U20 60m record holder blasting out of the blocks and coasting to victory in a wind-aided 11.10 (+2.7m/s).  Great Britain’s Imani Lara-Lansiquot was another to break new ground, setting a PB of 11.17 (+1.7m/s) to win the third heat.

World U18 champion Candace Hill of the USA coasted to victory in heat four in 11.43 (-0.8m/s) , while Trinidad and Tobago’s Khalifa St Fort also looked controlled when cruising to victory in 11.50.

The men’s 400m is shaping up to be the one of the races of the championships and several medal contenders blew off the cobwebs in this morning’s heats. Kenya’s Geoffrey Kiprotich was the fastest in the very first heat, lowering his PB to 46.23 and looking like there was much left in the tank.

World U18 champion Christopher Taylor of Jamaica looked composed as he eased to victory in the second heat in 46.73, while Botswana’s Baboloki Thebe also underlined his title credentials with a  facile win in heat three in 46.25.

Qatar’s Abdalaleh Haroun cruised through to the semi-finals with a 46.51-second clocking to win the fourth heat, while Kahmari Montgomery of the USA did likewise in the fifth heat, winning in 46.46. Botswana’s Karabo Sibanda won the sixth and final heat in 46.34.

The women’s 400m hurdles heats threw up a major shock, with world u18 bronze medallist Brandee Johnson of the USA eliminated after finishing fifth in her heat in 60.58.

Her countrywoman Anna Cockrell confirmed her title credentials by taking victory with ease in 56.85 ahead of South Africa’s Gezelle Magerman, who ran a PB of 57.75 in second. “I felt really good coming into these championships and practice has been going really well,” said Cockrell. “My goal here is to run two more good races and win.”

Cockrell should have it all to do to take the title, however, as Bahrain’s Aminat Yusuf Jamal stormed to a national U20 record of 56.94 to win the fifth and final heat. Germany’s Eileen Demes also impressed, taking victory in the first heat in 57.77.

China’s Jiayuan Song led the way in the women’s shot put qualification, opening with a throw of 16.17m to advance to tonight’s final. Other automatic qualifiers included Germans Alina Kenzel, who threw 16.04m, and Sarah Schmidt, who had a best of 15.69m.

Poland’s medal hope Anna Niedbala also qualified automatically with 15.67m. Elena Bruckner of the USA also confirmed her medal chance later today with an opening effort of 15.50m to automatically advance. Ireland’s Michaela Walsh threw a national U20 record of 15.31m to advance as one of six non-automatic qualifiers.

Japan’s Takumu Furuya was the fastest in this morning’s heats of the men’s 110m hurdles, setting a PB of 13.40 to move through to this evening’s semi-finals. He led home Poland’s Dawid Zebrowski, who also set a lifetime best with 13.48.

Jamaican medal favourite Damion Thomas eased through in the first heat, taking victory in 13.48. His teammate De’Jour Russell narrowly avoided elimination when finishing third in the next heat in 13.83 to take the final automatic qualifying spot, a race won by Chile’s Juan Pablo Germain, who set a national U20 record of 13.62.

Amere Lattin of the USA impressed in the final heat, running the second fastest time of the qualification heats when taking victory in 13.46. Algeria’s Amine Bouanani took the win in the third heat in a national U20 record of 13.65.

The men’s triple jump qualification was led by Cuban pair Cristian Napoles and Lazaro Martinez. Napoles was best in the Group A, jumping 16.53m on his opening effort to automatically advance, while Napolesm also only needed one attempt to go through to the final, his 16.49m the longest jump in Group B.

In the men's hammer qualification, world U20 leader Bence Halaszcz of Hungary advanced safely to the final with an opening effort of 77.86m, an automatic qualifier.