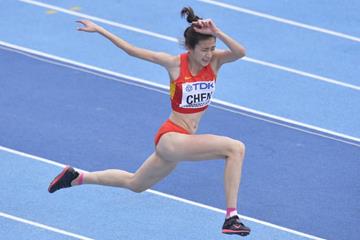 Two well-timed personal bests in as many days propelled Chen Ting to China’s first world U20 title in the women’s triple jump.

Arriving in Bydgoszcz with a modest 13.54m best, the 18-year-old improved to 13.77m in qualifying yesterday and again in the final where she reached 13.85m in the second round to seal her victory in a largely unpredictable, and, by historical standards, modest competition. Even Chen’s opening round 13.67m effort would have sufficed for the victory.

Silver went to Konstadina Romeou of Greece who, like Chen, didn’t rank too high among the pre-meet favourites. Arriving with 13.39m credentials, Romeou opened with a 13.55m effort, a career best that launched the 19-year-old to Greece’s best ever finish in this event at these championships.

The battle for bronze was closest, with Romania's world U18 champion Georgiana-Iuliana Anitei beating Bria Davis of the US in a tie-breaker.

Davis, who was eighth after the first three jumps with 13.21m, reached 13.49m on her last, to equal Anitei's best, but elevated to medal position by virtue of a superior second best mark. But Anitei, 17, stepped up to the challenge with a final-round 13.40m leap, shifting the tie-breaker back in her favour.

Further down, Yanis David of France, the winner of the long jump on Friday night, was tenth with 12.97m while Davisleydi Velasco of Cuba, the world U20 leader coming into Bydgoszcz at 14.08m, never found her rhythm and finished 12th with 12.83m.