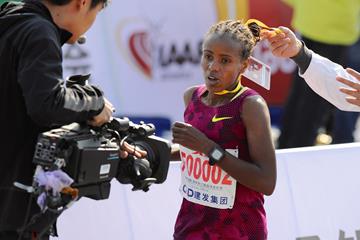 Ethiopia’s Mare Dibaba won the Xiamen Marathon for the second year in succession, taking more than one-and-a-half minutes off the course record she set last year at the IAAF Gold Label Road Race, winning in 2:19:52 on Saturday (3).

For the first time since the inaugural Xiamen Marathon in 2003, both course records were broken as Kenya’s Moses Mosop set a Chinese all-comers’ record of 2:06:19 to win the men’s race on a day when runners were met with ideal conditions with temperatures in the range of 11-15°C.

The organisers had made some adjustments to the route due to some construction-related concerns in the city. Some of the more undulating parts of the course – including the Yanwu Bridge that stretches over the sea – had been taken out.

When Dibaba won in Xiamen last year, she took 61 seconds off the course record and crossed the line five minutes ahead of her nearest rival.

This time, her victory was even more emphatic.

Dibaba built up a significant lead in the early stages of the race and maintained it all the way to the finish, despite some problems with her legs after 33km.

By equalling her PB of 2:19:52, she covered the course one minute and 44 seconds quicker than she did last year, finishing almost eight minutes ahead of Meseret Legesse, who once again finished second to Dibaba for the second year running.

“I could have run faster but I felt a little bit pain in my legs in the last 10km which forced me to slow down,” said the 25-year-old who finished third in Boston and second in Chicago last year. “But I am happy with the result.”

Dibaba had also aimed to break the Chinese all-comers' record of 2:19:39, set by Sun Yingjie in 2003, and the organisers had offered an extra bonus for achieving such a feat, but Dibaba missed that mark by just 13 seconds.

“I was trying to break the record and I missed it by a few seconds, which was a pity, but I am happy to break the race record," said Dibaba, who represented Ethiopia in the marathon at the 2012 Olympics. "The new course is very good and the fans along the road were so supportive from the beginning to the end of the race.”

Legesse was about a minute slower than last year, finishing second in 2:27:38. In third, Kenya’s Meriem Wangari set a PB of 2:27:53. It was the second time the 35-year-old had made it on to the podium in Xiamen, having finished second on her marathon debut in 2012.

Mosop back to winning ways

Back in 2011, Mosop made a promising start to his marathon-running career, clocking 2:03:06 on Boston’s record-ineligible course on his debut at the distance and then winning the Chicago Marathon with a course record of 2:05:37 later that year.

But in recent times, the 29-year-old has struggled to recapture that form. He finished eighth at the 2013 Chicago Marathon and a distant 12th in Prague last May, clocking 2:20:37. So when he lined up in Xiamen, he was something of an unknown quantity.

Unlike the women’s race, the men’s contest was more competitive.

A pack of 10 runners ran shoulder to shoulder after 7.5km and passed the 15km check point in 44:50. After 20km was reached in 1:00:20, the leading group was trimmed to six men as Ethiopia’s world bronze medallist Tadese Tola, the fastest man in the race with a PB of 2:04:49, was left behind.

The pace maker dropped out at the 30km mark, but the pace did not slow down. Regassa tried to pull away but was soon caught by Mosop and Ethiopia’s Abrha Milaw.

The leading trio ran alongside one another for a further 5km before Milaw slowed down. Mosop seized the lead at 40km and kept extending his advantage over Regassa untill he hit the finish line in 2:06:19 to take more than a minute off the course record set in 2013 by Ethiopia’s Getachew Terfa Negari.

Mosop’s time was also the fastest marathon ever recorded on Chinese soil, bettering the 2:06:32 set by the late Samuel Wanjiru when winning the 2008 Olympic title in Beijing.

"I planned to run in sub-2:06 in Xiamen, but I am happy with this result," said Mosop, who has a PB of 2:05:03. "I have been troubled with injuries – first a knee injury and than an injury in the calf – for two years. Winning in Xiamen at the start of the season is a huge boost for me."

Mosop's next marathon will be in Paris in April.

Regassa was also inside the previous course record, clocking 2:06:54 in second place. Milaw finished third in 2:08:09, nine seconds ahead of Kenya’s Robert Kwambai. Tola was a distant fifth in 2:10:30.

In total, more than 43,000 runners competed in the marathon and half-marathon races.