Diniz's mark is so recent it is yet to be ratified, but Suzuki improved it by 26 seconds, winning at the IAAF Race Walking Challenge meeting in 1:16:36.

But like the famous phrase relating to buses around the world, you wait ages for one world record and two come along almost at the same time.

With Diniz’s feat as motivation, 27-year-old Suzuki – who is renowned for setting off at a fast pace – went out quicker than he ever had done before, passing 6km in 22:53.

The last time he won here in 2013, he was 38 seconds slower, which equates to about 180 metres, and he still set an Asian record on that occasion.

The weather this time helped Suzuki – who, because he speaks no English, tells you his name by imitating a revving bike, like the make of his famous namesake.

A mild 15C was in contrast to previous Nomi races where squalls, rain and wind hampered progress.

However, Nomi is a challenging circuit and has seven turns on a 2km loop. Race walkers have got used to a straight up, straight back route but the course in the recently created city on Japan’s southern isle of Honshu is anything but easy.

Suzuki motors to record over second half

It was clear that he was on course for a fast time if he were to maintain that pace, but that had often been his downfall in the past.

He finished well clear of his rivals, smashing Diniz's mark of 1:17:02 set at the recent French Race Walking Championships in Arles.

This is Suzuki's third Asian title, having won in 2010 and 2013, and although his scintillating performance dominated the race, there was a fabulous six-way battle behind him, which on any other day would have held centre stage.

It was won by Isamu Fujisawa, already 36 seconds behind Suzuki by 5km but who had six others in his wake with a second to spare between them.

It was exactly the same at half way, but as the pace wound up it was down to four going into the last 5km.

Fujisawa sprinted for the line and threw himself over it to win by just a few centimetres from his compatriot Daisuke Matsunaga, with both given the same finishing time of 1:19:08.

Needless to say, both broke their previous bests by considerable margins.

Fujisawa did so by nearly a minute and Matsunaga's time was more than two minutes better than his eye-catching effort a year ago in Lugano.

Kai Kobayshi was four seconds in arrears for fourth place, but the 22-year-old clocked 1:19:12, which sliced more than a minute off his previous best set just a month ago to the day in Kobe.

Last year’s winner had to settle for fifth, but only a second behind Kobayshi.

The result was bittersweet for Korea’s Hyunsub Kim. Although he lost out in the final mad dash for the tape, he broke his country’s national record for the second year in a row, this time by 11 seconds.

The women’s 20km race was won by Yongbo Hou in 1:29:25, an improvement on her personal best of 1:02. But, unlike in the men’s contest, the Chinese 20-year-old had to wait until the last 5km before she edged ahead.

Kumiko Okada attempted to emulate Suzuki by charging to the front and forging a 23-second gap by 5km.

No doubt spurred on by a personal best set only last month, she was 39 seconds up by halfway in 44:06.

However, she ran out of steam from that point and was seemingly walking through treacle over the last 5km.

Her laboured last 5km in 23:08 was a minute slower than the first segment, but it still netted her a personal best by more than two minutes in 1:29:46.

Canada’s Rachel Seaman was the only race walker outside Asia to reach the podium, going under 1:30:00 for the first time when finishing third in 1:29:54. Another 50 metres and it is likely she would have caught the struggling Okada. 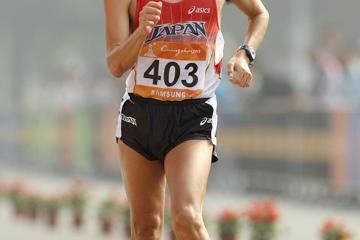 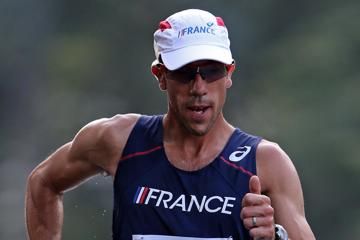