A new series called first impressions starts today and who better to get matters under way than the 2015 IAAF World Athlete of the Year Ashton Eaton.

Eaton, especially after his win and world record in the IAAF World Championships Beijing 2015 decathlon, is one of the most recognisable faces in the sport.

Read more about some of the charismatic and erudite US combined-event ace’s first experiences.

It was in elementary school when we were asked to do a timed mile. The only guidance we had from the PE teacher was that we had to complete it within 15 minutes.

For some reason, in my mind, I wanted to run it as fast as I could so I asked mum to buy me spikes, a jersey and shorts, and I ran the timed mile as hard as I could. I was timed at 6:30.

My local newspaper, the Bend Bulletin, interviewed me while I was at high school after I had just signed with the University of Oregon. I remember I wore a University of Oregon hooded sweatshirt and they took a picture of me in the long jump pit. I was freezing!

When the paper came out, it was cool to be on the front of the sports page. It was my first experience of being interviewed and the writer taking an interpretation of what I’d said to complete the article.

The first sport I played was baseball. I remember being on the Little League team and someone pitching the ball to me for the first time. I was ready to no longer hit the ball off the tee and an adult pitched it to me underhand.

I remember I hit that sucker, it went right over the pitcher’s head and to second base and into the outfield. I took off and I can’t quite remember whether I got to third base or all the way home. I played baseball from the age of five to about 14. I loved playing baseball and stealing bases.

It was to compete at the 2007 Pan American Games juniors in Sao Paulo, Brazil. I remember finishing third at US Nationals and missing out on selection by only three points in the decathlon (only the top two qualified) but I was surprised to have made it in the long jump.

I remember arriving at the airport in Sao Paulo and on the journey to the hotel I thought this is the biggest city I have ever been to. The traffic was unbelievably busy. It was a very interesting experience but in the long jump competition itself, I stunk the place out (Ashton placed 11th).

Winning a silver medal at the 2011 World Championships. At the time, I had the highest score in the world (8729) going into the event but I barely scored 8500 in Daegu, so I didn’t produce what I was capable of.

Yet, I had pipped Leonel Suarez of Cuba, to silver by four points, and once I got on to the medal stand I was really excited. I was pleased Trey Hardee won gold and it was an American 1-2; I couldn’t wipe the smile from my face.

It was November 2009 and I was in my junior year at college. We had been hill running and I recall after the session going for a cool down lap on the track and felt my knee pop. It had been catching for a few weeks and it instantly became swollen.

I knew straight away I had torn my meniscus because I had done the same injury to my other knee while wrestling at high school. Fortunately, it wasn’t such a serious injury because I was back training again within six weeks.

It was a Ninja Turtle action figure. I would make him kick and punch and put him on his back and spin him because that’s how they took out a lot of the bad guys!

First thing I learned to cook

Macaroni and cheese. I asked to have it at every meal and finally my mum and grandma must have got sick and taught me to cook it. I used to be able to eat two boxes all on my own. Now, I make a mean mac and cheese.

In high school, I had a gold 1992 Ford Explorer. It was a gift. I used to have a terrible habit of locking the keys in the car when I used leave the car running to help it start on a cold morning. I think the local locksmith became used to me calling him.

The first pet I remember was a cat called Baby. She would sleep with me and I could call her from anywhere and she would come running. 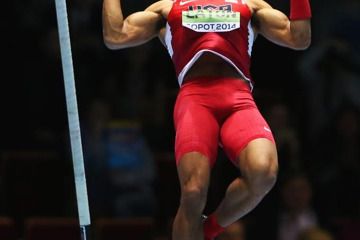 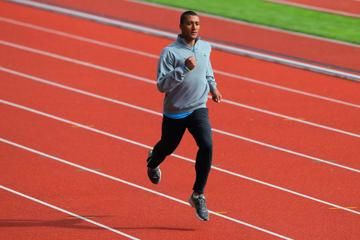 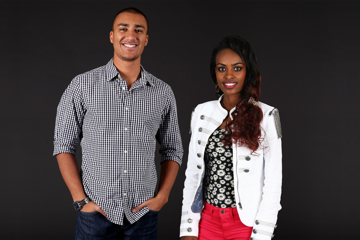 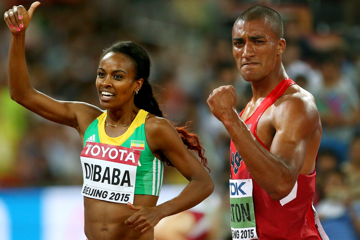 A look back at Ashton Eaton’s and Genzebe Dib...