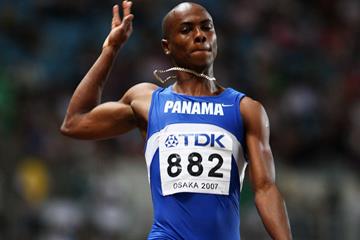 From the captivating duel between Mike Powell and Carl Lewis in Tokyo in 1991 to Dwight Phillips’ unexpected but thrilling fourth world title success 20 years later in Daegu, the men’s long jump has served up many great memories in the 34-year history of the IAAF World Championships.

Yet for sheer sixth-round drama, perhaps nothing tops the 2007 showdown between Irving Saladino and Andrew Howe when in the final minutes of the competition, Saladino produced the perfect counterpunch to seal Panama’s maiden world title.

Born in the seaport city of Colon, Saladino started out as a promising baseball player before discovering athletics.

In 2003 he earned the long jump bronze medal at the South American Championships and leapt a PB of 8.12m in 2004, but it was only after linking up with leading Brazilian jumps coach Nelio Moura did his career really start to skyrocket.

“I was glad to meet Nelio,” explains Saladino. “He was more than a coach and became like a second father to me. He is very patient and has the qualities of a psychologist. He was always able to drag me back from bad moments in my career. I feel very fortunate to be coached by him.”

In 2005 he made rapid progress, setting a personal best of 8.29m and placing sixth at the World Championships in Helsinki before the next year taking a silver medal at the IAAF World Indoor Championships in Moscow, finishing just one centimetre behind Ignisious Gaisah of Ghana.

He finished the year as the world leader following a lifetime best leap of 8.56m and in 2007 he felt ready to make a splash at the IAAF World Championships in Osaka.

A small injury to the foot hampered his competitive programme earlier in the season, but a gold medal at the Pan American Games in Rio provided the perfect preparation for Japan.

“My Pan American Games win increased my confidence level,” he says. “I arrived in Osaka really looking forward to winning the gold medal. I knew one of my main rivals was Dwight Phillips (at that point the world and Olympic champion), but many jumpers could be a threat. I knew it would be necessary to jump to the best of my abilities.”

In Osaka, he successfully advanced to the final in sixth with a best of 8.13m. The final took place in a typically hot and muggy night inside the Nagai Stadium. In round one, Phillips, who was seeking a hat-trick of world titles, took early control with an 8.30m leap while Saladino was red-flagged. However, in round two the Panamanian loomed into contention by matching Phillips’ first-round effort and moving into joint first after two rounds.

A third attempt of 8.46m gave Saladino the outright lead. After a lull in rounds four and five, the competition – as it so often does – exploded into life in the final stanza.

In a moment of high drama, Italian Andrew Howe advanced from bronze to gold by powering out to 8.47m – just one centimetre ahead of Saladino – before embarking on a high-energy celebration which provided one of the stand-out images of the championships.

For Saladino it was a case of déjà vu.

“When Andrew jumped 8.47m, I immediately looked at my coach and asked myself, ‘is it happening again?’ In Moscow in 2006 (at the IAAF World Indoor Championships) I finished one centimetre behind Ignisious Gaisah. But then I quickly told myself that I was the best jumper in the world and this was my opportunity to show it on the big stage. Nelio has full confidence in my capacity and didn’t push me.”

In an extraordinary response, Saladino kept his cool to launch out to 8.57m and secure his country’s first World Championships gold. He beat his chest in defiance and bounced with joy down the running track to celebrate a special jump.

“That sixth jump was the most magical moment in my career,” he says. “No doubt, it was the best competition of my life. After jumping 8.46m, I thought I had already won, but the sixth round was crazy. It got better and better.”

Unfortunately, he was so excited at winning post-competition, the doping control procedure lasted longer than he would have wanted and by the time he arrived back at the hotel that night he was so physically and emotionally spent he went straight back to bed.

His World Championship gold medal in Osaka paved the way for more success as the following year he leapt a South American record of 8.73m in Hengelo to climb to eighth on the world all-time list. He added the Olympic crown in Beijing to become one of only five men in history to simultaneously hold both the world and Olympic long jump titles.

In 2009 he soared out to 8.63m in Eugene, but from that point on, crippling injury problems prevented him from recapturing his best form. He retired from the sport in 2014 at the age of 31.

“It was really frustrating,” he says. “The injuries sidelined me too often and it was one of the main reasons why I retired early.”

Married to Esilda and with two children – Irving David, 4, and Ian Marcos, 1 – he lives in his homeland and has a heavy involvement in sport through his roles as a member of the Panamanian Olympic Committee and a Sports Ambassador for Panama.

Still closely following the long jump, Saladino has been impressed with the progress this season of South Africa’s Luvo Manyonga, who will be among the favourites to strike gold at the IAAF World Championships London 2017.

And Saladino knows all too well how much of a positive impact a world title can have on an athlete’s career.

“To become a world champion is one of the biggest goals an athlete can set,” he says. “It boosted my confidence and the people in Panama went crazy about it.”