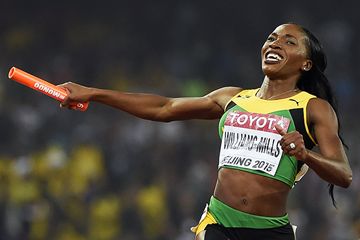 It was my school sports day aged about 10 and I won. Back then it was all about winning the medals and the trophies. I still think the medals I won back then are at my parents’ house. I remember laughing at all the kids when I won because I thought it was funny. Sometimes I would win by a long way.

My first real coach that helped me understand the sport was my college coach, Tom Jones. He was the first coach who helped fulfil my potential and who helped me believe in myself. After I finished college I continued to be coached by him and I remember ahead of competitions back then I was so nervous. He was such a patient man. The first person I would call would be coach Jones and he would calm me down. He would talk about my race rivals and help me visualise how to run the race.

It was netball. I used to love it. I played goal shoot. It was only when one of my teammates blabbed to the PE teacher that I could also run that I joined the track team. I competed in both sports for a while but it was hard to do both and I ended up running track. I enjoyed netball but one part of the game I didn’t enjoy was the opposition players putting their smelly arms over me!

The first one I recall was being a part of the Jamaican 4x400m squad at the 2003 World Championships in Paris. At the time I was still at college, but after placing third at Jamaican nationals they selected me for the 4x400m. Unfortunately, I was told I was too inexperienced so I wasn’t picked to run. I remember I wasn’t too happy and told the coaches it would never happen again. I am quite a picky eater, so I found the food a challenge. I thought I have to figure out a way to survive but I was lucky in that there was a McDonald’s close by.

Maybe it was a dress back home in Jamaica. I do remember saving my money and buying a Christmas outfit. I recall my sister used to buy me some things which maybe weren’t age appropriate. When I was aged about 17, she bought me a dress which was very short with a see-through upper part.

A doll. I would try to comb the hair as practise for my own hair. I would want braids and my mum couldn’t do braids but by practising on the doll it allowed me to put braids in my own hair.

It was a Honda. I bought it with my own money after I left college. I paid about $4000 for it and it was a good car.

Not making the Olympic final in 2008. I had enjoyed such a great 2007 season, even after my coach (Tom Jones) died a few months before the World Championships in Osaka (when Williams-Mills won 400m bronze). I coped well training on my own for that period before the World Championships but when I trained on my own for the full 2007-8 winter I wasn’t mature enough to take on the challenge.

My Olympic 4x400m bronze at the 2004 Athens Games. At the time I was finishing college so to run the first leg and put my team in a position to walk away with a medal was a great achievement. It was also special to win a medal and follow in the legacy of all those other great Jamaican quarter milers. Winning a medal in Athens gave me the belief I could make it as a full-time athlete. Plus, I also got to wear a banging one-piece outfit.