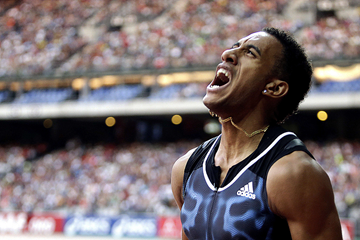 As a sub-13-second 110m hurdler, Orlando Ortega is one of the planet’s finest exponents of his craft. Here the Spanish record-holder looks back over some of the first things in his life.

I played baseball with my friends when I was young, but the first sport I did properly was boxing at the age of 12. I started to box at my school and I did so for a month. I never got involved in an organised fight, only training, but after one month I decided it wasn’t for me and that is when I started athletics.

I remember doing a school decathlon aged 12. I did all of the events, but I remember my father saying to me that my best event was the hurdles and that I had good technique. From this point on, I practised the hurdles and my first hurdles event was over the low barriers. From that very first competition, I said that this is the event for me.

It was competing at the 2011 Pan American Games in Guadalajara in Mexico. I remember running 13.30 in the final (Cuba’s Dayron Robles took gold in 13.10) and it was a good performance. I remember I was very happy with third place. For me, this is where my international career truly started.

It was my father, Orlando Ortega Snr. He coached me from the age of 12 to 15. I was happy he was my coach. I liked it. It worked well.

It came at the 2010 World Junior Championships in Moncton in Canada and the competition took place just days before my 19th birthday. I went into the competition ranked in the top few in the world, behind Pascal Martinot-Lagarde of France. However, in my first-round heat I tripped and fell and I did not finish the race. I felt so bad. I was satisfied that I had qualified for my first global championship, but it wasn’t a great feeling to not finish the competition. I remember the climate in Canada was different and it was cooler than I was used to.

I remember I was interviewed by Cuban TV ahead of the 2010 World Junior Championships. It was a good experience and I felt happy. I would like to improve my English and do more interviews in the future.

First item of clothing you bought

It was a pair of spikes and I loved them. The spikes meant so much to me. I still have them in my home today. I bought the spikes about 10 years ago and it reminds me of the beginning of my life as an athlete. The spikes were black coloured. I like black and red. They are my two favourite colours.

I remember I had a model toy car and a model Moto GP bike. I played with them all around the house.

I love dogs and as a family growing up we had a dog for a long time. I cannot remember the name of the dog, but he was black and white.

My mum liked Marc Anthony, so it would have been a song by him.