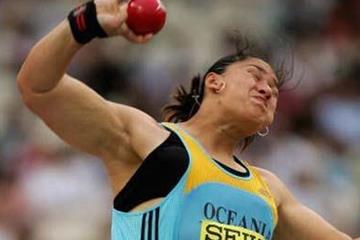 World and Olympic champion Valerie Adams is eager to travel to Europe to start her countdown towards the Berlin World Championships...

“Well, June has been filled with lots of hours in the gym and also out on the field – working on my strength and power.  It's been very cold, wet and miserable here in Auckland during the New Zealand winter and I just can't wait to get out of here - which happens next week!

“My first stop is in Northern Australia for a training camp. After that we then move over to France where I will compete towards the end of July.  I am excited to head overseas and get the feel of some sun, some competition and really focus with no interruptions before the World Championships.

"My physio will be with my coach and I while we are in France and also at the World Championships so that will be absolutely awesome to have that support around me!

“My husband Bertrand is also training really hard to compete in France and also hopes to make the French World Championships team which will be decided after their National Championships so good luck babe!!!

“Well that is it from down under. Forty one days to go until I compete in Berlin so I’ve got to get to training now, it's count down time…