Wayde van Niekerk flew to an African record (since surpassed by Botswana’s Isaac Makwala) of 43.96 at the IAAF Diamond League meeting in Paris last month.

Here the rising one-lap star from South Africa offers his take on some areas of his life which mean a lot.

It is hard to choose, but I would say the best one was finishing fourth in the 200m at the 2010 World Junior Championships. That was the competition where I first realised I had a talent. Making that breakthrough was a real highlight.

I would say New York last year as that was a huge confidence booster. This year was further confirmation that I need not hold back or have any fear. Now, I have shown to myself that I have the ability, I just need to work on the consistency.

It was really a drag in 2012 and 2013 struggling with hamstring injuries. Yet following that low, I’ve managed to learn from the experience and I’ve since been able to run quicker times.

My best friend is Gideon Trotter (the South African 100m and 200m sprinter). We first met at the 2010 World Junior Championships and we’ve become very close over the years. I remember I was very shy and quiet back then and to make friends with a guy from the same province was important. We are now training partners and over time we’ve built up a good bond and a good relationship. As training partners, we try to help each other reach the next level.

My best friend, Gideon, because I am the one he needs to beat and he is the one that I need to beat to get to that next level.  On the international circuit in terms of my main rival, because it changes so much and because anyone can win on any given day, it is hard for me to say.

I’m a big fan of the sprinting, so I enjoy watching Usain Bolt. I love watching the way he runs because of his talent and the way he has inspired so many other athletes. In the 400m, Kirani James is amazing. His last 100m is insane.

Anything above 400m in training! Once we start training over that distance, I’m not a happy guy. Many of us started in this sport to be the fastest guy, so not once did I think I would be doing the 400m. Anything over 400m in training and I become very negative, but I have to try to change my attitude to get the job done. My weakness is to come to terms with the pain and I need to find a way to love the training for the 400m.

I’m a huge football fan and my biggest indulgence is playing football with friends and family in the yard. It can get quite competitive – and I have to be careful because of the risk of injury – and with egos flying around tempers can go crazy. I’m also very competitive when it comes to playing football games on the Xbox. The other day I got into a little bit of banter with my mate on twitter following a game between the two of us.

I listen to a variety of music. I have a religious song I listen to before I take a shower on a race day by Jesus Culture called ‘Break Every Chain’. It is very inspirational. It is about overcoming obstacles and that a new generation is coming through. Other than that, I just have a range of songs on iPod shuffle. 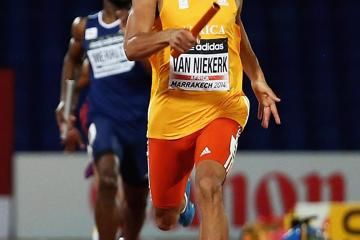 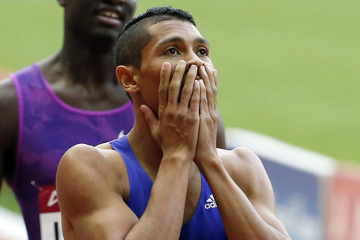 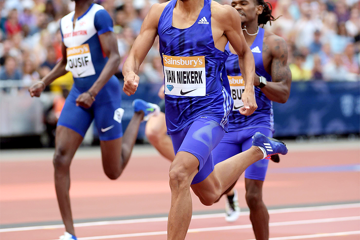