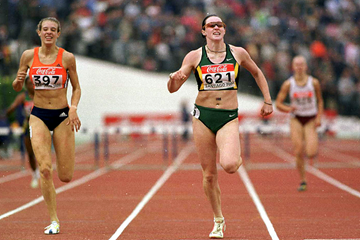 In the first of a news series in which top athletes recall their memories of competing at the IAAF World U20 Championships, Australian 400m hurdler Jana Pittman looks back at her double one-lap success at the 2000 edition in Santiago, Chile.

An outrageously gifted age-group athlete, Jana Pittman went into the 2000 campaign with high expectations. The world youth 400m hurdles champion in Bydgoszcz the previous year, Pittman showed outstanding early season form, equalling what was then the second-best 400m hurdles mark in history by a junior athlete with a blistering 55.20 clocking in South Africa.

Later that year aged just 17, she competed in her home city of Sydney at the 2000 Olympic Games, but she made a costly tactical error in her heat of the 400m hurdles.

Chasing the reigning Olympic champion Deon Hemmings of Jamaica “like free beer” on her immediate outside, Pittman badly faded down the home straight and failed to advance.

The disappointment sat badly with Pittman and acted as a huge motivation for the IAAF World Junior Championships, which took place a few weeks later in Santiago, Chile.

“I'm really stubborn and by not succeeding (at the Olympics) it really pushed me to work harder at the World Juniors,” says Pittman. “Having said that, going back to training after the hype of the Olympics was quite challenging and I did worry about my performance levels.”

Besides her trip to Poland for the 1999 IAAF World Youth Championships and a training and racing period in South Africa earlier in 2000, Pittman had never travelled outside of Australia. She found her trip to Chile an “eye-opening” experience.

She recalls making a Chilean friend, Ale, who acted as her interpreter and the pair are still in contact today. She also formed a good friendship in Santiago with the winner of the men's 400m, Hamdan Al-Bishi from Saudi Arabia. It was an adventure which made a lasting impression and formed the direction of her life for many years to come.

“Competing at those champs was the moment I realised I wanted to be an athlete for life,” says Pittman.

Coming into the event, Pittman faced a dilemma. Already a world youth champion in 400m hurdles, she was also ranked third in the world for the 400m flat. She entered both events but could not decide which to prioritise. She intended to run in the heats and maybe semis of both before deciding which final to compete in.

Yet this option was not available to the then teenage Australian.

“When I read the rules I found out I couldn't drop out of one event otherwise I wasn't allowed to progress in the other,” she says. “All of a sudden I realised I was running both events at the same champs.”

Inside the Estadio Nacional Julio Martinez Pradnos, she faced a gruelling schedule of six races in six successive days. During the first two days of action she eased through the heats and semi-finals of the 400m, recording times of 54.01 and 53.00 respectively. The following day she opened her 400m hurdles account, winning her heat in 56.16, before securing her first gold medal of the championships on day four with 400m victory in 52.45, winning by 0.33 from Poland’s Aneta Lemiesz. Then on day five of the event she held off a strong challenge from Dutch athlete Marjolein de Jong to secure 400m hurdles gold in 56.27. Melaine Walker of Jamaica, who later won world and Olympic 400m hurdles titles, grabbed bronze.

It was a magnificent physical effort.

“I remember being very physically and mentally tired going into the 400m hurdles final and if I hadn't already won the 400m, I reckon I wouldn't have won the 400m hurdles,” said Pittman. “Yet I was so happy (after winning the 400m flat), I powered away off the last hurdle from the Dutch girl, who set a two-second PB.”

If Pittman's double success was not already impressive enough, it was played out to the backdrop of her undergoing a series of school exams, which she had to sit at the same time as her fellow students back in Australia.

During her time in Chile, she took three exams including her biology exam at 2am only hours after striking gold in the 400m hurdles final. Come her final outing later that day in the 4x400m final, she could “barely warm up” and struggled as the Australian quartet finished seventh.

Some 16 years on from her glorious success in Chile, Pittman reflects with pride on her achievements.

“The part I enjoyed the most was receiving the medal and hearing the Australian anthem,” she says. Yet when it perhaps sunk in most was when I was flown to Monaco later that year to receive the IAAF Rising Star Award.”

Reflecting on her World Junior Championships experience, Pittman insists it instilled in her “a belief” in her ability.

“I didn't realise it at that time but having belief is half the battle,” adds Pittman. “From being successful at a world level made me believe anything was possible. I thought, ‘I am a world junior champion, I'm going to be a world senior champion’.”

Pittman went on to join an elite group of athletes to win world youth, world junior and world senior titles by claiming victory over 400m hurdles at the 2003 IAAF World Championships in Paris. Pittman regained the title at the 2007 edition in Osaka. She produced her best Olympic performance when finishing fifth at the 2004 Athens Games.

Injuries later badly hampered her career, but now aged 33 she is still training and hopes to sign off her career at the 2018 Commonwealth Games in Gold Coast. Pittman is currently in the third year of a bachelor’s degree in medicine and surgery at Western Sydney University and has two children; Cornelis, 9, and Emily, 1.

Advice for the next generation

“I would say take it seriously,” says Pittman. “The experience goes by so quickly, but it could be the one chance you have to be successful in your career. I can look back on it and say the World Juniors was one of the highlights of my career. But an injury could come tomorrow, so take time to stop and smell the roses. Enjoy the experience.”