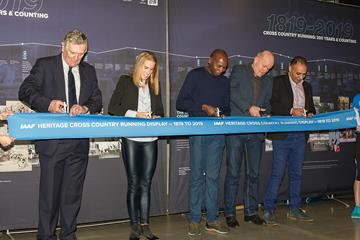 Two global Danish athletic stars, Wilson Kipketer and Sara Slott Petersen, were in DOKK1, Aarhus’ library and culture centre this afternoon for the opening ceremony of the IAAF Heritage Cross Country Display – 1819 to 2019.

The display, which tells the 200 years history of cross country running, opens just a month before this Danish port hosts the IAAF World Cross Country Championships Aarhus 2019 on Saturday 30 March.

If you run, then cross country is your history

Aarhus is a city of running with the Royal Run and the annual half marathon in June each year. The concept for this year’s championships is to return cross country running to its extreme sport roots.

While Kipketer and Slott are more used to running on synthetic tracks than trudging ankle deep in mud, they both acknowledged cross country is where today’s mass running movement began.

“The course of year’s world championships in Aarhus returns cross country running to its original roots as the first extreme sport. The IAAF Heritage Display traces the sport back to its foundation 200 years ago,” said Kipketer. “It’s an incredible story told through text, photos and video. Whether you are a recreational runner or a more serious athlete, running which is the world’s most popular pastime began with cross country.”

“This Heritage exhibit tells a remarkable story,” said Petersen. “I find it amazing that a paperchase running game in the English countryside, invented in 1819 by school boys, started a process which 200 years later has become a worldwide running movement. Wherever you are in the world, if you run then you owe much to cross country. It’s your history!”

With artefacts and ephemera in the Aarhus exhibit dating back to 1831, the mini-exhibition is a must-see for all true distance running fans and cross-country aficionados.

A half dozen of the 100 plus artefacts being exhibited in DOKK1 are on loan from Shrewsbury School, England. It was at this English public school that a ‘Hare and Hounds’ paperchase game, which followed a trail of paper laid across country, first took place in 1819. The hunt, run on foot across fields, through woods and streams and over the hedges and farm gates of the spectacular Shropshire countryside, is the where world’s original extreme sport, cross country was born!

Shrewsbury School’s archivist Robin Brooke-Smith, who was at today’s ceremony to hand over these ancient items, confirmed, “200 years ago the boys from the Royal Shrewsbury School Hunt laid a trail across country. Ultimately this action led to the creation of the International Cross Country Championships in 1903 and its successor the IAAF World Cross Country Championships which this year celebrates its 43rd edition here in Aarhus. The school is exceptionally proud of its unique place in running’s history.”

Competition uniforms and spikes, either permanently donated to the IAAF Heritage Collection or on temporary loan, have been provided to the Aarhus display by a pantheon of cross country running gods. Lynn Jennings, Sonia O’Sullivan, Paula Radcliffe, Paul Tergat and John Treacy, have between them won 14 world cross gold medals. That number will be augmented by another five golds during the week of the championships when the medal collection of Norway’s Grete Waitz joins the exhibit.

Another highlight of the one-month public display is ‘The Kings Trophy’. Awarded to the Danish men’s national cross country champion each year ever since Prince Christian (1870-1947), the future Christian X, first presented the trophy in 1905 to honour the country’s greatest endurance athletes. The 10 inch solid silver goblet is Denmark’s finest and most historic sports trophy.