Simply put, Usain Bolt is the best sprinter of all time. Thirteen individual gold medals, seven at world championships and six at the Olympic Games, are the stuff of legends. Add five individual world records, with four of them set in major finals, and his claim to a rare level of greatness becomes undeniable.

This exclusive excerpt from Usain Bolt: Legend looks at the fascinating numbers behind the honours listed above.

His compatriot Asafa Powell broke 10 seconds on 97 occasions having long overtaken the tally of 51 such races by American Maurice Greene. Bolt comes next with 49 sub-10 seconds.

As you might have guessed, the tall man from Trelawny is supreme at the sharp end of the list. He has 12 runs under 9.80 seconds, three of the fastest five and the two fastest of all, his world record of 9.58 seconds at the 2009 World Championships in Berlin and his Olympic record 9.63 seconds from the 2012 final in London.

He shares the third fastest time – 9.69 seconds which was a world record when he ran it to win the 2008 Beijing Olympics – with Tyson Gay and Yohan Blake. His 9.69 seconds came in his fourth race in two days in Beijing, while Gay and Blake scored theirs in one-off races in Shanghai and Lausanne, respectively.

The average of Bolt’s 10 fastest 100m races is 9.73. Only Gay, Blake, Powell and Bolt himself have ever gone quicker than that.

Although only two of his individual world records have come in the 200m, he is far better in this event than anyone else. He has broken 20 seconds 34 times, 10 clear of Namibia’s Frank Fredericks and 11 ahead of the American pair of superman Michael Johnson and Wallace Spearmon, who have 23 each.

Usain Bolt competes at the 2002 World Junior Championships in Kingston

If that weren’t enough, he is the only athlete to have broken 20 seconds while still a junior athlete. He did it twice. The first one is the world junior record of 19.93 at the 2004 CARIFTA Games. That spellbinding run in Bermuda broke his tie with American Roy Martin, who had the old mark at 20.13 seconds.

Bolt’s top ten 200m times average out to 19.47 seconds. Other than the man himself, only Blake and Johnson have dipped under that threshold. It’s amazing.

Fast when it counts

It’s an understatement to say Bolt is good in big meets. From 2008 onwards, he has produced his best times of each season in major finals. Most of us remember his world records in Beijing in 2008 and in Berlin the following year, but he never stopped speeding.

His times have been more modest since. Still, at the 2013 and 2015 World Championships and the 2016 Olympics, his winning times have been his best efforts in all those seasons.

Which is Bolt's better event?

Bolt has only two world records in the 200m compared to three in the 100m. His best times in each event are both brilliant – 9.58 seconds for the 100m and 19.19 seconds in the sprint once known as the ‘deuce’. The IAAF Comparison Tables, designed to help rank performances in different track and field events, provide a split decision. The 100m world record earns 1356 points while the 200m world mark gets 1351 points.

The tables turn when Bolt’s top 10 average times are put under the microscope. His 100m top ten average is 9.73 seconds and that collects 1301 points. The corresponding figure for the 200m – 19.47 – takes 1305 points from the IAAF Comparison Tables.

If you view the average as a measure of how fast he has been continuously, the 200m is just ahead.

That is confirmed by an analysis of his comparative win-loss records from 2008 onwards. You can count his 100m losses on one had with a finger to spare. Powell, Gay, Blake and Justin Gatlin are the elite group to have beaten him in the 100m, and none of them has done it twice. For the 200m, you only need one finger. His loss to Blake at the 2012 National Senior Championships is the only blemish on his competitive record in the period starting in 2008.

He did win his first major medal in the 200m, a silver behind Gay at the 2007 Worlds, but that was a year before he took up the 100m as a championship distance. Of course, he is the long-range favourite to bring his world 100m gold medal count up to four this year. Sadly, he is not planning to run the 200m.

It’s probably been wise for the 6 ft 5 in Bolt never to have run indoors. Instead, he has often used the first quarter of the year to run 400m races and relays. Still, the curious mind sometimes wonders how he would fare, if he ventured under cover.

The only clue comes from a statistical breakdown of his 100m world record released by the IAAF. It turns out that Bolt covered the first 60m in 6.32 seconds. Maurice Greene, 100m Olympic champion in 2000 and three-time world champion, holds the world record for the indoor 60m at 6.39 seconds. The Jamaican record is 6.44 held by Powell.

Best of all time

It’s hard to compare athletics from different eras. The great Americans Jesse Owens and Bob Hayes raced at a time when professional careers in athletics weren’t common and so very few American men did more than one Olympics.

Owens came to fame when he set or equalled six world records in one day in 1935. That magnificent day of days contained a record-equalling run in the 100 yards and new marks in the 220 yards, long jump, the 220-yard low hurdles. When his great runs in the 220-yard races were converted to metres, he had touched two world records there as well. He won four gold medals to be the star of the 1936 Games, but couldn’t have gone to another Olympics even if he wanted. The Second World War forced the cancellation of the 1940 and 1944 Olympics.

Hayes, the dominant sprinter of the early sixties, concentrated on the 100m at the 1964 Olympic Games in Tokyo, won it in a world record time of 10.06 seconds, but then departed to a successful career in American football.

Carl Lewis won four gold medals at the 1984 Games and, like Owens, was a long jumper in addition to being a 100m and 200m sprinter. Bolt has always concentrated on the dashes.

Lewis, Greene and Bolt each have three world 100m titles, but Lewis won his in 1983, 1987 and 1991, with a world record of 9.86 seconds as the cherry topping on his hat-trick, when the world championships were held every four years. From then onward, athletes have had the opportunity to become world champion every two years. Greene won his 100m crowns in 1997, 1999, when he did the sprint double, and in 2001.

There is, nevertheless, a point of comparison which separates Bolt from the illustrious trio of Owens, Hayes and Lewis. The tall Jamaican won both his 2008 Olympic 100m and 200m gold medals in world record times. No other male sprinter has ever done that, but that shouldn’t be a surprise. After all, there has never been a sprinter quite like Bolt.

Usain Bolt: Legend looks back on the career on and off the track of sprinting superstar Usain Bolt. The richly illustrated book contains a host of previously unpublished photos, extensive quotes from friends, coaches and a personal farewell message from Bolt himself.

Use discount code LEGEND20 on eurospanbookstore.com and get a 20% discount on the book! 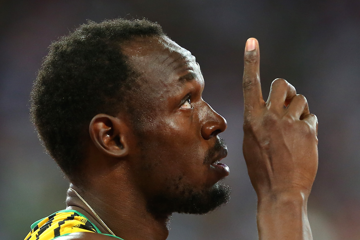 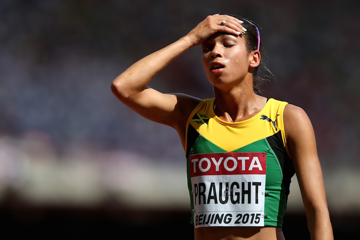 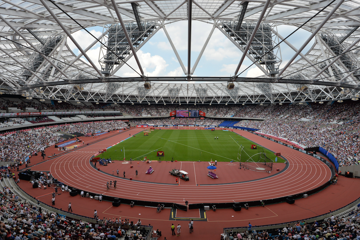