Some things shouldn’t be rushed. Wilma Murto always knew she could return to the remarkable heights she hit as a teenage pole vault prodigy, but she also knew that it would take time, care, dedication and trust. Trust in the process, as she tried her best to prevent the pressure and expectation from becoming overwhelming. Her own ambition was already enough.

Murto was 17 when she improved the women’s world U20 pole vault record to 4.71m in 2016. It’s a record that still stands. Reflecting on it now, as she sits in the Swiss sun towards the end of a hugely successful season, the 24-year-old describes that breakthrough clearance as “sort of an accident”. She was capable, of course – having the skill to soar over a bar balancing four metres and 71 centimetres above the ground doesn’t just happen – but testament to her tenacity, she set her sights on strengthening the foundations rather than being focused on five metres. Now she is a two-time Olympian and the European champion.

“There was a lot of external pressure,” acknowledges Murto, who took the Finnish record to 4.85m to win her European title in Munich in August. “Everyone started saying, ‘oh, she is going to jump five metres’, but I had no idea what that was going to take. At that point, I was a 17-year-old who had been training kind of professionally for a year. I had no idea what professional sport was.

“That 4.71m was a result of some things clicking on that day and my coach doing a great job at coaching me, but at the same time, it was an accident that once clicked and then I had to work the foundation again. I now feel like that foundation has been built over the last six and a half years. I know what it takes, and I am much more sure about my ability to do 4.85m again, or jump even higher.” 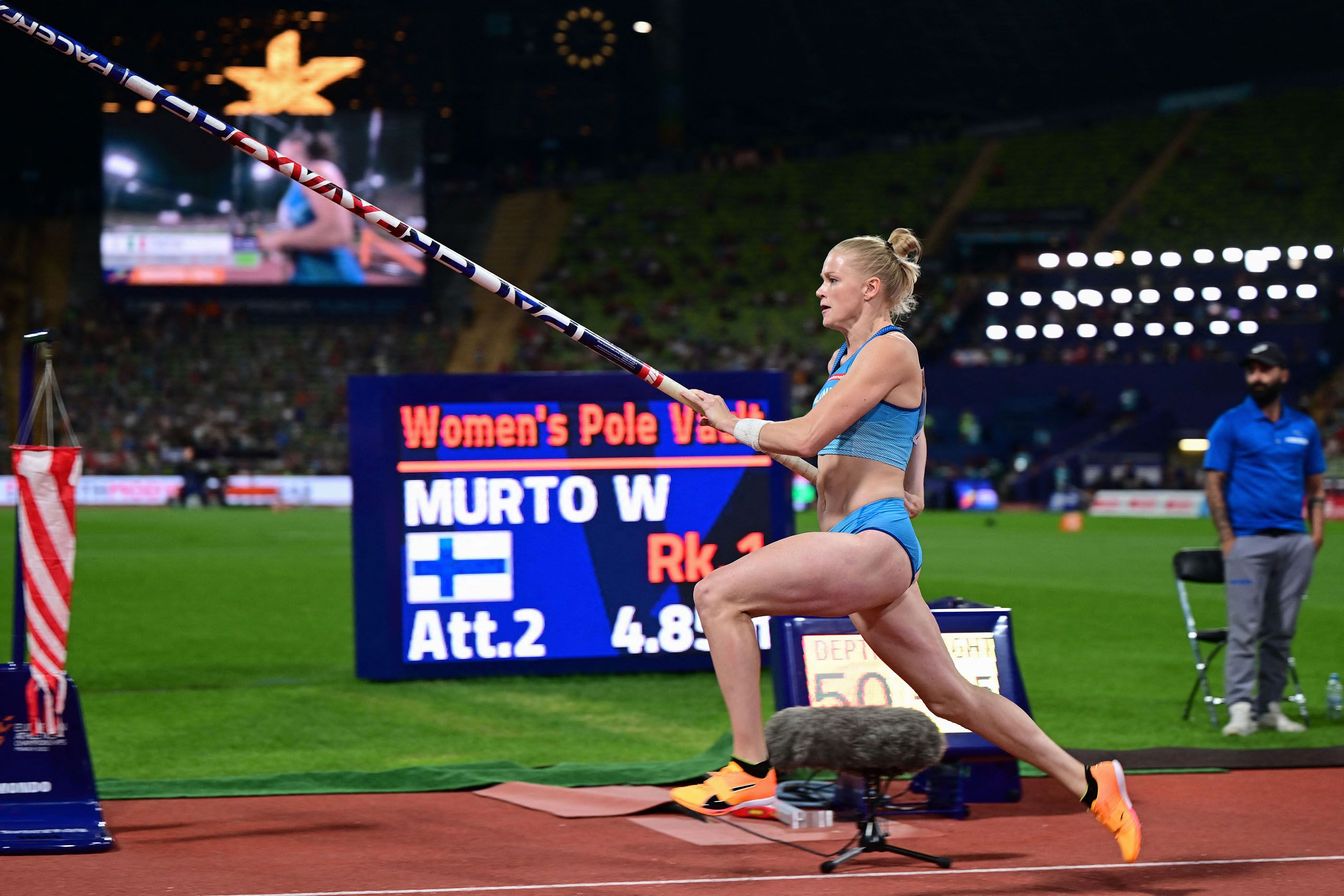 Growing up in the small town of Salo in southwest Finland, where her family has a cattle farm of around 200 animals, Murto started athletics at the age of four. Born into a sporty family – her father Matti used to run and do the high jump, while her cousin Iida is a professional volleyball player and her grandmother is the cousin of Voitto Hellsten, the 1956 Olympic 400m bronze medallist – Murto tried everything before discovering the pole vault when she was nine. Her mother, Sari, was studying coaching and that’s how they met Jarno Koivunen, who guides Murto to this day.

“It fit my personality well,” Murto says, explaining her love for the pole vault. “I was a fearless kid, climbing trees and falling out of places. The extreme part of pole vault got me hooked.”

With the training facilities located an hour away from her home, it was a big investment that could sometimes see Sari – who became a coach at their home club of Salon Vilpas – drive her daughter up to 500km back and forth every week.

“When I was 16 I moved to Turku, where I live now, for school and also for Jarno’s coaching,” explains Murto, who now studies journalism and communications at the Turku University of Applied Sciences. “Step by step, it has got a bit more intensive and more professional.”

Vaulting into the spotlight

It was also at the age of 16 that Murto made her major international debut, as the youngest among the women’s pole vault entries at the 2014 World U20 Championships in Eugene. She cleared four metres for the first time that season to qualify for the championships, but an even bigger breakthrough was to follow 18 months later. Competing in the German city of Zweibrucken at the end of January 2016, she cleared that 4.71m bar to add seven centimetres to the world U20 record that had been set by New Zealand’s Eliza McCartney the previous month. Then came the outdoor season, during which Murto finished seventh at the senior European Championships in Amsterdam, claimed bronze at the World U20 Championships in Bydgoszcz and then made her Olympic debut in Rio.

But adjusting to life as a world-class athlete wasn’t easy.

“It snowballed,” Murto says. “Breaking the world U20 record, of course that opened so many doors, but it was a lot for a 17-year-old to handle. Managing that expectation, and then when I didn’t jump 4.70m again for many years – it has not been easy to listen to the criticism. I wish I understood then that I had time, to go at my own pace, to learn how to be a professional athlete. Because that takes years and experience, trial and error. So, my errors were quite public, and it was easy to criticise them.” 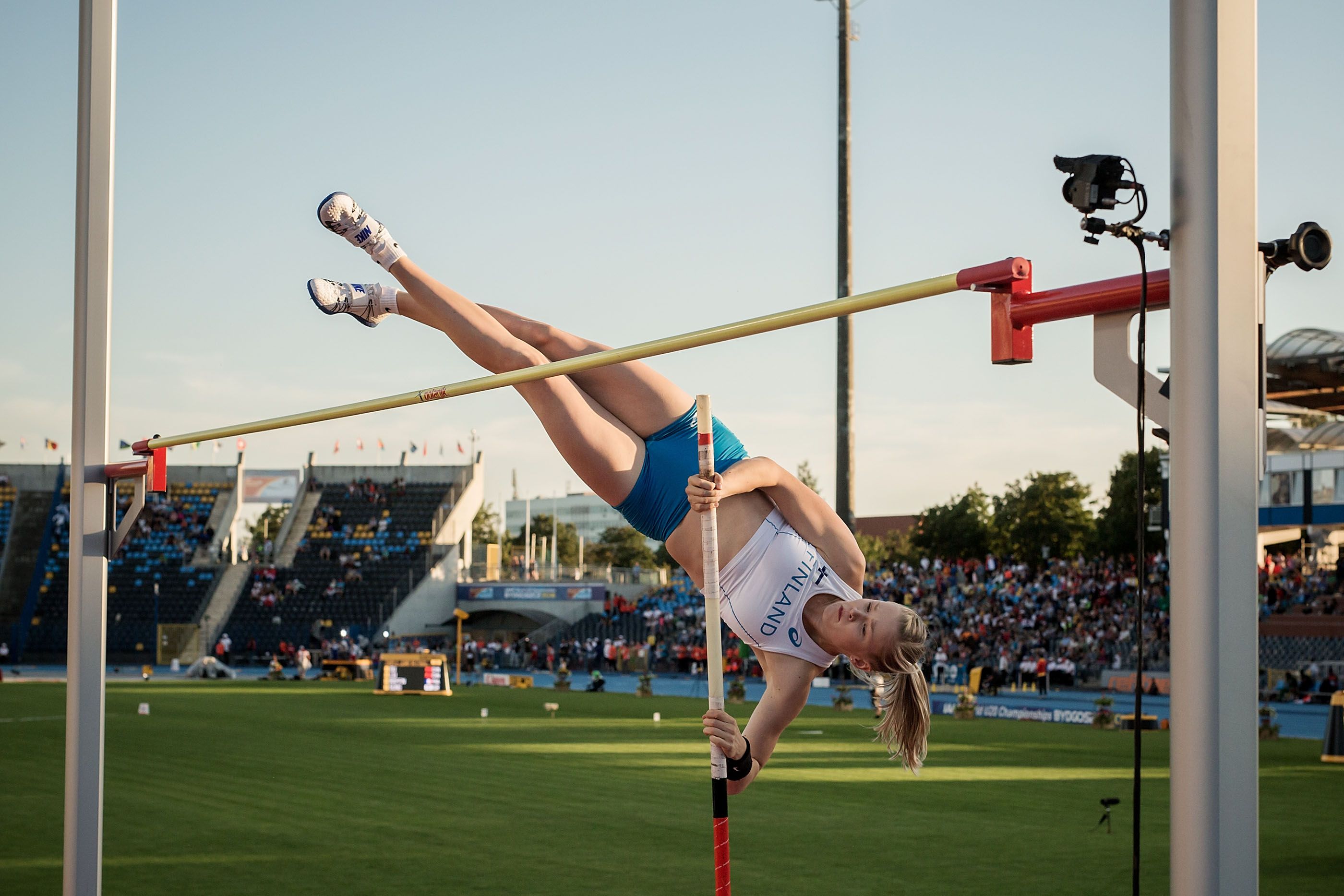 But there is more to the story, one that Murto speaks so passionately about in the hope that she can help others, in the same way that others have helped her.

“I was a kid, and even though I was quite tall at a young age, I’m a late bloomer so I got a lot of comments on my body when I was growing up – ‘she’s not doing well because she’s heavier than before’,” Murto explains. “I thought, ‘I’m glad I’m heavier than before, because I was a kid then!’ But I struggled a bit with eating and it has taken years of work on the mental side of food. That’s one of the big things that has changed.

“I hope the younger athletes hear my side of things, since there have been some articles about me saying that now I ‘look like an athlete’ I am performing better, and now that I am lighter in weight, which is actually not even true, I am doing well. They are justifying my success by the changes in my body, which is so much more complex than it seems.

“It has taken years of mental work in acceptance and making fuelling decisions to give my body what it needs, not that I am taking away the things I love to lose weight or anything like that.

“It's not just girls, but all athletes – I hope they feel they have the time to let their body do what it needs to do,” she continues. “It’s a big shortcut that you shouldn’t take, to think ‘I just need to lose the weight and I am going to do better’. It is way more complex than that, and I wish people understood it more.

“I feel like this kind of success gives you a platform to talk about things that you find important. I am very glad that I have had mentors who have talked about these things, like Holly Bradshaw – she is a big mentor for me,” adds Murto, sharing the impact of the Olympic bronze medallist who celebrates body diversity in sport. “That is something she has helped me with, since she has had similar experiences to those I have had. I wish everyone had that kind of person to learn from and have support in that journey, because it can be a long and tricky one. But I hope that story by story, it is spreading that knowledge.”

Murto’s pole vault journey took a different path at the end of the 2018 outdoor season when she decided to part ways with her coach, but they teamed up again a year later.

“We work so much better together and now that three years of work shows,” she says. “We learn from every challenge and we have fought ourselves back every time. I feel like every time we do it better.”

After missing out on the final at the 2019 World Championships in Doha, Murto returned to the global major stage in Tokyo, finishing fifth at her second Olympic Games. Later that month she cleared 4.72m in Tampere, a welcome centimetre improvement on her PB of five and a half years. 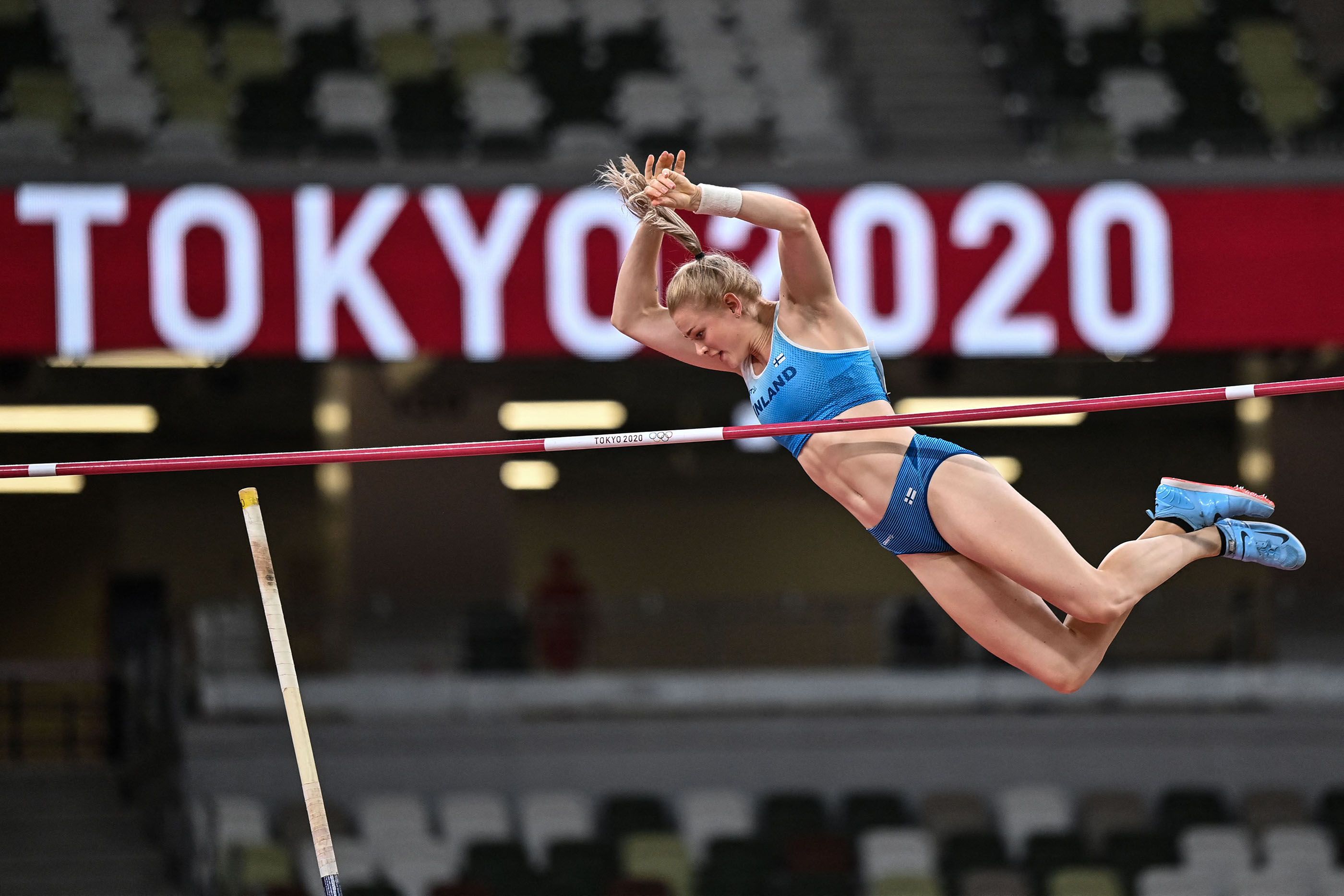 But then, instead of being able to build on those performances at the start of this year, there came a series of setbacks – a broken foot in January, Covid in March, and some other sickness in between.

Experience taught her to keep faith. She was able to return to competition in June and secured a sixth-place finish at the World Athletics Championships Oregon22, back in the same US city where she made her major international debut eight years earlier.

“It was very nostalgic, being back in Eugene,” she says. “I reflected so much on how far we have come.”

It was a bittersweet moment.

“It was my best championship performance at that point, so in a way I was quite pleased, and it was a clean card (first-time clearances up to 4.60m),” she says. “But the first thing I said to my coach after I failed the third time at 4.70m was: ‘I don’t want to be sixth’. Well, it was said with stronger words in Finnish! But I wasn’t pleased with being sixth and I knew I had more in me.”

She didn’t have to wait long to prove it.

A medal at the European Championships in Munich had been the goal all along, even after the setbacks earlier in the year, but it wasn’t just her gold medal win that was impressive, but the way Murto achieved it.

Improving her national record three times, she cleared 4.75m and 4.80m on her first attempts and was confirmed champion when two-time gold medallist Katerina Stefanidi failed her two tries at 4.85m, the Greek 2016 Olympic champion having chosen to move straight to that height after one failure at 4.80m. But still Murto remained calm. After an unsuccessful first attempt, she didn’t need to try 4.85m a second time, but she wanted to.

With her family in the stands and to chants of ‘Wilma, Wilma’, Murto remained a picture of composure. She took a deep breath, ran down the runway, and flew. 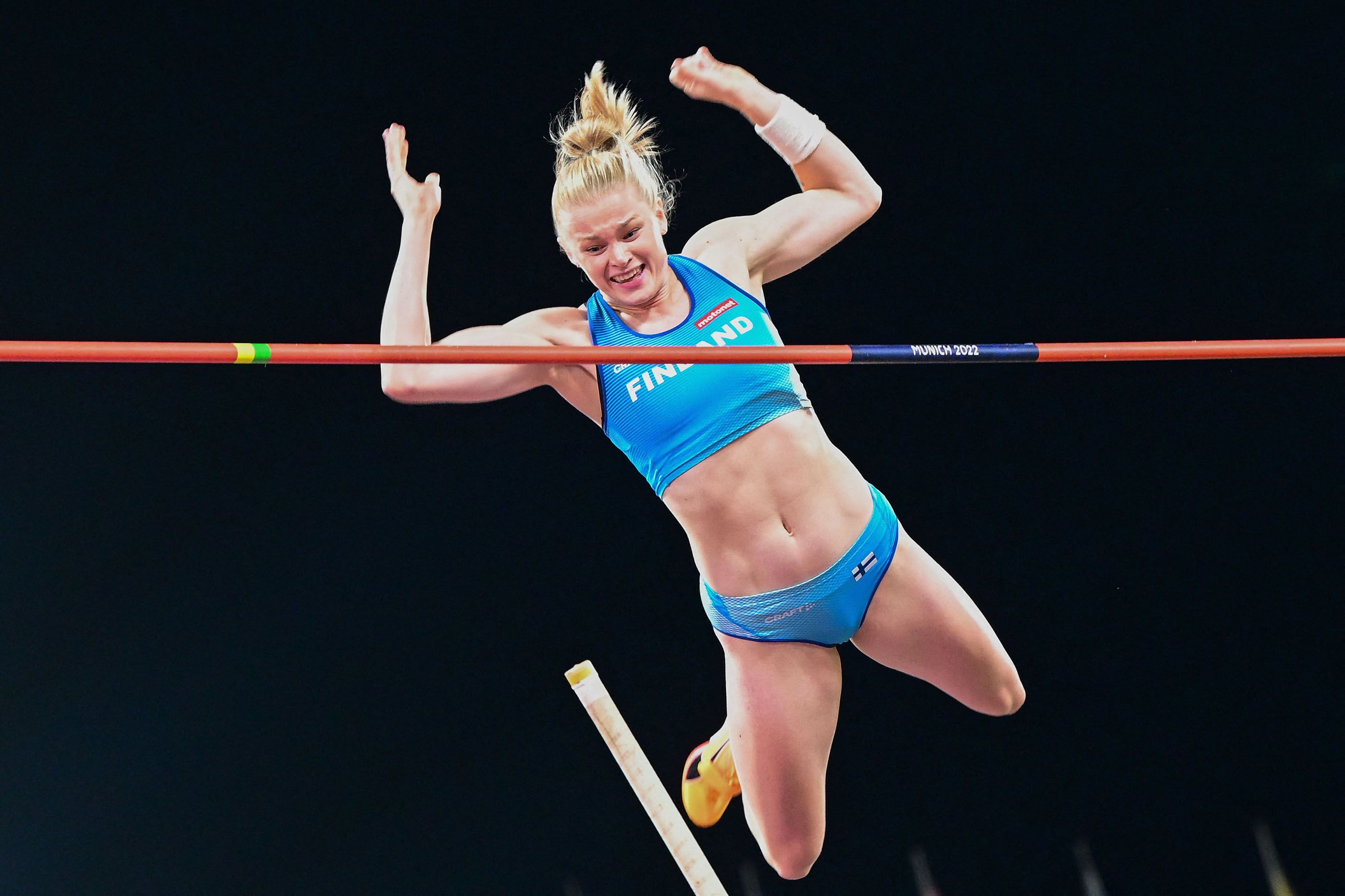 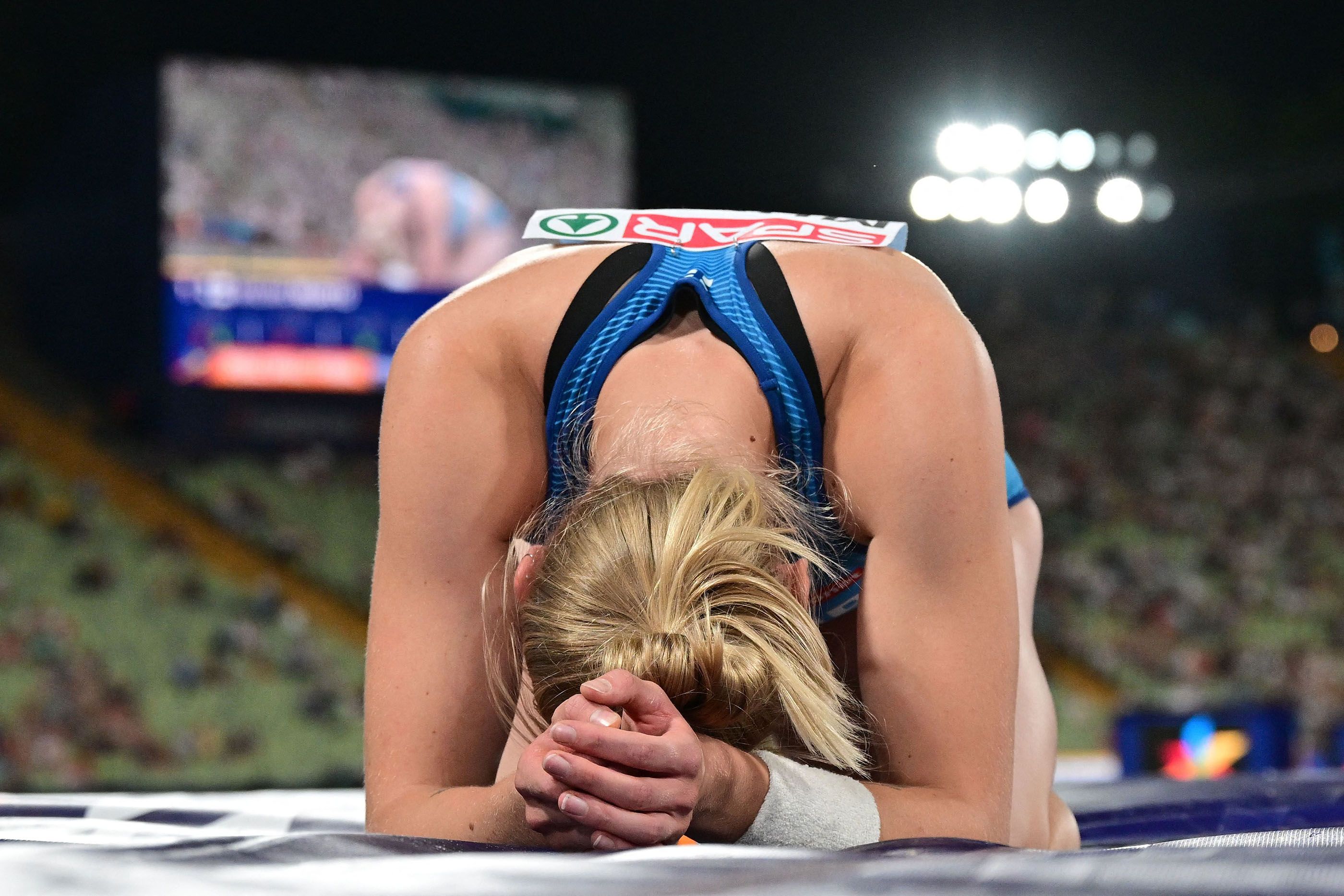 “I feel like there are no words to describe that kind of experience,” she smiles. “I have a much stronger recollection of what I felt at 4.75m and 4.80m, but that 4.85m is where my words stop.

“It was a magical night but a weird experience, considering how I felt through the whole competition. I was checking in on myself – ‘what’s happening in my head’, ‘what’s happening in my body?’ Before Kat took her last jump at 4.85m, I already had two scenarios in my mind. If she clears, what do I do? If she doesn’t clear, I am the European champion and what do I do then? I had already decided that if she didn’t clear it, I wanted to try 4.85m again, because I felt that I had a big jump in me.

“I got to keep that flow for one more jump and when I cleared it, I just started crying. It was insane. It’s the feeling that you are unstoppable, that you can do no wrong at that point.”

After Munich, Murto competed twice more in Germany and twice in Switzerland, finishing third at the Wanda Diamond League meeting in Lausanne and then fifth in the final in Zurich. From the start of her U20 journey in Eugene to competing at the senior global event there eight years later and capping the season with a continental title win, Murto has gone full circle in 2022 and one thing is for sure – she will continue to take things step by step.

“That’s something I am very grateful for – my experiences as an U20. I feel like I handled the pressure this year so much better than I did then, because I had that experience from before.

BACK
Pages related to this articleAthletes
Wilma MURTO