As part of their commitment to lower the carbon footprint of the World Athletics Championships Oregon22, organisers encouraged fans to use active travel options to get to and from Hayward Field.

Some of those options? Walking, taking a bus or riding a bike. Residents with their own bikes were welcomed by valets who parked and secured them near Hayward Field. For out-of-towners, the best option was the city’s PeaceHealth Rides bike sharing system.

In 2018, when Al Hongo, the director of operations at Cascadia Mobility, helped to create a bike share system, he did it to support the locals in Eugene by integrating it into the city's public transit system. At first, Cascadia Mobility distributed its bikes throughout the dense parts of the city — the University of Oregon campus and downtown.

Now, with Eugene hosting the World Athletics Championships, Cascadia Mobility’s system transportation plan has taken on a flood of people from all over the world.

“The people of this town really think of this bike share system as something of their own. We actually run it as a public service and as a non-profit,” Hongo said. “Cascadia Mobility works really hard to ensure that availability is strong throughout the service area.”

The system began with 300 bikes distributed among 40 stations around Eugene. The city is also home to 46 miles of shared-use bike paths and 187 miles of on-street bike lanes, which have helped maximize the use of the bike share system.

Cascadia Mobility’s transportation plan grew even more important once Eugene was awarded the 18th edition of the World Championships. The fleet grew to 350 thanks to a donation of 50 bikes from Nike, and additional stations were added.

“It’s grown incrementally over the years,” Hongo said. “Even though the number of bikes in the system hasn’t changed dramatically, ridership has grown quite a bit. A lot of folks who actually own their own bikes have learned to adopt it as a great backup option.”

Since its genesis, Cascadia Mobility’s plan has prioritized Eugene locals. Now it is helping to support the thousands of people coming to enjoy the World Championships while still acting as a transportation outlet for those already living here.

Hongo has seen bike-share systems like his own turn from a beneficial experience into a nuisance. This can happen if the bikes locations aren’t organised well, kept unused at stations too long or if they’re inconvenient to access in more dense parts of the city.

“Cascadia Mobility works really hard to ensure that availability is strong throughout the entire service area and doesn't really play favorites,” Hongo said. “Additionally, we're really strict about enforcing the terms of service when it comes to correct parking and locking, which helps to make sure that sidewalks are clear for people walking and people in wheelchairs.”

Not only did Cascadia Mobility prioritize the safety of Eugene’s pedestrians, but it increased the safety of the bikeshare system in preparation for the World Championships.

“We gave all the bikes and extra safety check right before the Worlds,” Hongo said. “Just to make sure that they’re running in tip top shape, and they're clean and they're comfortable.”

Hongo hopes that future host cities adopt a transportation plan similar to the one that Cascadia Mobility laid out. It’s one that has always helped him out. 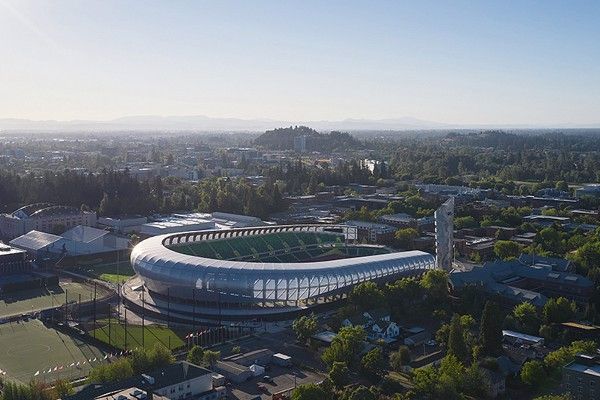