Hungarian athletics has an extremely rich history of more than 125 years, as in a previous article it was presented. Now let's take a look at the recent heroes of the sport who have achieved the most successes. Also, we have collected the future hopes of the 2023 World Championships in Budapest.

In the history of modern Olympic Games since 1896, Hungarian athletes have stood on the podium a total of 40 times. Hungary has gained 10 gold, 12 silver and 18 bronze medals.

One of the heroes of the 2012 London Olympics was Krisztián Pars, who was unbeaten in the hammer throw field.  He is the last Hungarian Olympic and European champion. In 2012 in Helsinki and in 2014 in Zurich, he also became the continent's best.

Pars is also one of the most successful athletes at the World Championships, winning silver medals in 2011 and 2013. Although Hungary has yet to win a gold medal in the history of the outdoor world championships, with seven silver and bronze medals we are the best nation without a gold medal.

Indoor results are quite different though. Anita Márton made history in Birmingham in 2018, by winning the shot put. The greatest icon of our time has brought home at least one medal from every major world athletics event: she is the last Hungarian athlete to stand on the podium, winning bronze at the 2016 Rio Olympics, and a year later she won silver at the World Championships in London. She is a two-time European indoor champion and has also won silver and bronze medals outdoors. Like 40 year-old Krisztián Pars, she is preparing for one last big shot at the 2023 World Championships in Budapest!

Luca Kozák can look forward to the 2023 season, including the World Championships, with a fantastic season behind her. The national queen of the 100m hurdles won the silver medal at the European Championships, and twice ran the Hungarian record of 12.69 seconds. Anna Tóth is a young challenger to the throne, who, despite being 19 years old, is already running 13 seconds. She is one of the best in her age group at international level. The best of 2010s, Gréta Kerekes, also aims to compete at the 2023 World Championships.

Combined events have great traditions in Hungary: while in the 2000s decathlete Attila Zsivóczky was a bronze medallist (2005) and a silver medallist (2006) at the European Championships, nowadays Xénia Krizsán can hopefully achieve good results in the heptathlon next summer. She took over the Hungarian record in the event from the 1995 World bronze medallist Rita Ináncsi.  Krizsán was third in the 2021 European Indoor Championships in Torun, and this year she gained her best individual result in Munich with a fifth place in the outdoor event.

Bence Halász is the other home favourite at the first weekend of the World Championships.  Still only 25 years old, he already has a personal best of 80.92 metres. He won silver in Munich this year, bronze at the European Championships in Berlin four years ago, and also won a World Championship medal in 2019. If the throws above 81 metres on 20 August 2023, the fireworks in honor of the national holiday might be for his honor as well. In the women's field, Réka Gyurátz could be a favourite to reach the final.

In the early 2000s, Adrián Annus, Róbert Fazekas and Zoltán Kővágó also contributed to the success of throwing events. In 2002, hammer thrower Annus won the European title in Munich, as did Fazekas in the discus throwing. A year later both won silver medals at the World Championships in Paris. They would also have won gold at the 2004 Athens Olympics, had they not both been stripped of their most prestigious medals for doping offence.

After returning from their ban, Fazekas could climb to the bottom step of the podium once more at the 2010 European Championships. Fazekas holds the Hungarian record in the discus throw with 71.70 metres, while Annus is the national record holder in the hammer throw with 84.19 metres.

After Fazekas' ban, the slightly younger Zoltán Kővágó won the silver medal in the discus throw at the 2004 Olympics, but he lost his 2012 European bronze medal due to doping offence. Next summer, János Huszák and Róbert Szikszai will represent the red-white-green colours in this event.

We will cheer on Hungarian participants in the most prestigious event as well. This is largely thanks to the Hungarian 100 m record holder and European bronze medallist Roland Németh, who took over the job of the 21-year-old sprinter Boglárka Takács before the season. Despite her young age, she has already improved the adult women's national record to 11.31 seconds, but her coach says there is still a lot left in her student.

In the men's race, Márk Pap is considered as talented as Takács in the women's field. However, he might only be seen in the relay at the World Championships in Budapest.

As the host country, Hungary will have the chance to prove itself in all five relay events. However, our team do not want to assist behind the best only, but will also be looking to fight for a place in the final. Therefore, the last three days of the WCH are set to be really exciting.

The legacy of Marcell Deák-Nagy, who won a fantastic silver medal in the 400m at the 2012 European Championships in Helsinki and set a Hungarian record of 45.42 seconds, will be carried on by a strong group of youngsters. In the men's 4x400m relay, Attila Molnár, Dániel Huller, Tamás Máté and Zoltán Wahl are expected to be among the top performers. Molnár's talent will be on show in the individual event, Máté's speed in the 200m and Huller's versatility in the 800m.

In the women's 4x400, the national record could also be in jeopardy, with the foursome of Bianka Bartha-Kéri, Evelin Nádházy, Fanni Rapai and Janka Molnár expected to compete. In both the women's 4x100 and the men's 4x100, a very young relay team will be in front of 35,000 spectators, both of which could become dominant relay teams of the 2020s.

In the women's long jump we can also expect a Hungarian competitor. The national record in the event is 6.86 metres, held by Tünde Vaszi, who won silver at the 2002 European Championships in Munich. Réka Szilágyi and Norbert Rivasz-Tóth will carry on the javelin throwing tradition, while Nóra Szabó, Zsófia Erdélyi, Levente Szemerei and Gáspár Csere will represent the marathonists in the beautiful city centre of Budapest.

Also in the longer distances, but still in the stadium, we will see what 21-year-old István Palkovits can do in the 3000m steeplechase against the world's best. István Szögi can qualify in the 1500m, one of the most spectacular and unpredictable events, while Viktória Wagner-Gyürkés can fight with African runners in the 5000m.

Viktoria Madarász proved at the 2022 European Championships that Hungarian race walkers will be worth cheering for next summer. She won bronze in the 35km event at the Europeans this year, so she could be in top 10 on home soil too. The qualification of Máté Helebrandt, Bence Venyercsán, Rita Récsei and Barbara Oláh would not be a surprise either, so they could form one of the largest part of the national team. 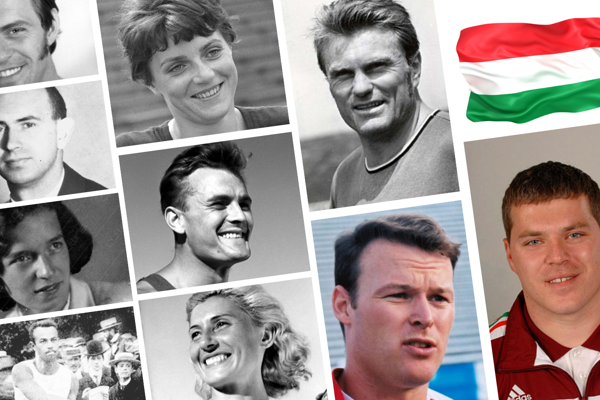 The heroes of Hungarian athletics...