Double silver adds fuel to competitive fire for the Uibos

On 24 July 1952 at the Olympic Games in Helsinki, Czechoslovakia’s Emil Zátopek kicked away from the field in the final 150 metres to take gold in the 5000m. An hour later, his wife Dana Zátopková matched his achievement by winning the Olympic title in the javelin to complete a husband-wife medal double on the same day.

Having finished her 400m final, Shaunae waited trackside to cheer on her husband in the 1500m, the final event of the decathlon, before completing a joint lap of honour with him by her side.

“When we realised we would be competing on the same night, we knew it would be a little bit hard to watch each other compete,” said Shaunae. “I was watching him earlier this evening and I had to remind myself to put away the phone. But it was a great experience getting to support him from the side of the track.

“I’m really happy for Maicel. He’s had an extraordinary season and I’m very happy for him.”

The Bahamas athlete recorded a massive 0.6 second personal best, running 48.37 to move to sixth on the world all-time list. However, she was bettered by Bahrain’s Salwa Eid Naser’s 48.14, the third fastest 400m clocking in history.

“I think I let it get away from me a little bit too much on the curve, but I was able to come home a little bit stronger,” said Shaunae. “I used my strength in the home straight. I can’t complain about 48.3. I’ve trained really hard this season and I feel in great shape. To run a big PB is really impressive so I’m very happy with it.”

Her husband’s success was no less notable. Having had to undergo surgery on a heel injury last year, the Estonian only resumed training at the start of March this year. Since then he has suffered from a shoulder problem which has prevented him from doing any javelin specific training.

Despite these challenges, he claimed his first major global outdoor medal, finishing second with a PB of 8604 behind gold medallist Niklas Kaul of Germany. Despite relinquishing the lead he held going into the 1500m, Maicel fought off the challenge of Canada’s Damian Warner to match the achievement of his compatriot Erki Nool who also claimed a world silver medal, back in 2001 in Edmonton.

“I had the time differences in my head going into the 1500m,” said Maicel. “I think it was two seconds with Niklas and three with Damian. When Niklas went ahead, I tried to stay behind him, but on the third lap he had some more in the tank. I had to let him go and just try to hang on for second place.

“I like to try to take it one event at a time and just have fun with it. I feel this meet was one that I was really able to enjoy. The javelin was a bit painful but every other event was fun.”

The couple met during their freshman year in college at the University of Georgia in the USA back in 2012. At first they became very good friends before they eventually started dating. They got married in 2017 and now both reside and train in Clermont, Georgia. They occasionally train together on the track with both athletes being highly competitive with each other when they do.

“I’ve never raced him in the 400m but if somebody was to put a picture of me on the back of one of his competitors’ heads, he’d probably run a big PB,” joked Shaunae.

“We talk about track and field all the time. We are always working with each other on things we can fix and we are always pushing each other to do our best.”

This level of competitiveness isn’t just confined to the track according to Maicel, whose 400m PB is 50.18. “It’s always competitive on the track and off the track,” he said. “We are competitive about anything really. We’ll argue about who our dogs love the most. Just really random things like that. It’s a lot of fun.”

While both athletes’ attention will now to turn to the Olympic Games in Tokyo next year, Shaunae has a long-term goal to compete in a heptathlon, thanks mainly to her husband’s influence.

“I’m definitely looking forward to doing it one of these years,” she said. “Maicel is a big influence with regards to me doing it. I used to do a little bit of multi events when I was a younger and then I kind of brushed it aside. After meeting Maicel, he started planting the idea in my head. I think it will be a really fun one to try and test out and see how it goes.”

Their spousal rivalry will likely increase a notch or two when she does. 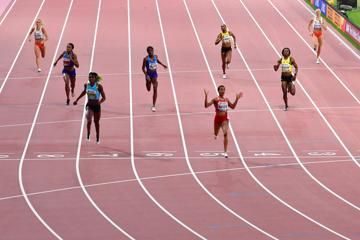