It was a photo that said so much about the changing face of a nation, one that triggered a wave of debate on social media and among the highest reaches of Italian politics: four athletes, standing proud in front of their country’s flag at the 2018 Mediterranean Games.

Raphaela Lukudo, Maria Benedicta Chigbolu, Libania Grenot and Ayomide Folorunso – four women of colour, four sprinters who could never have foreseen how far and wide that image would go.

“The outbreak on social media was out of this world,” says Folorunso. “It was a mix of (good and bad). There was a lot of politics involved, a lot of talk about real Italians. But change happens. Those typical, white Italians are no longer the only Italians.” 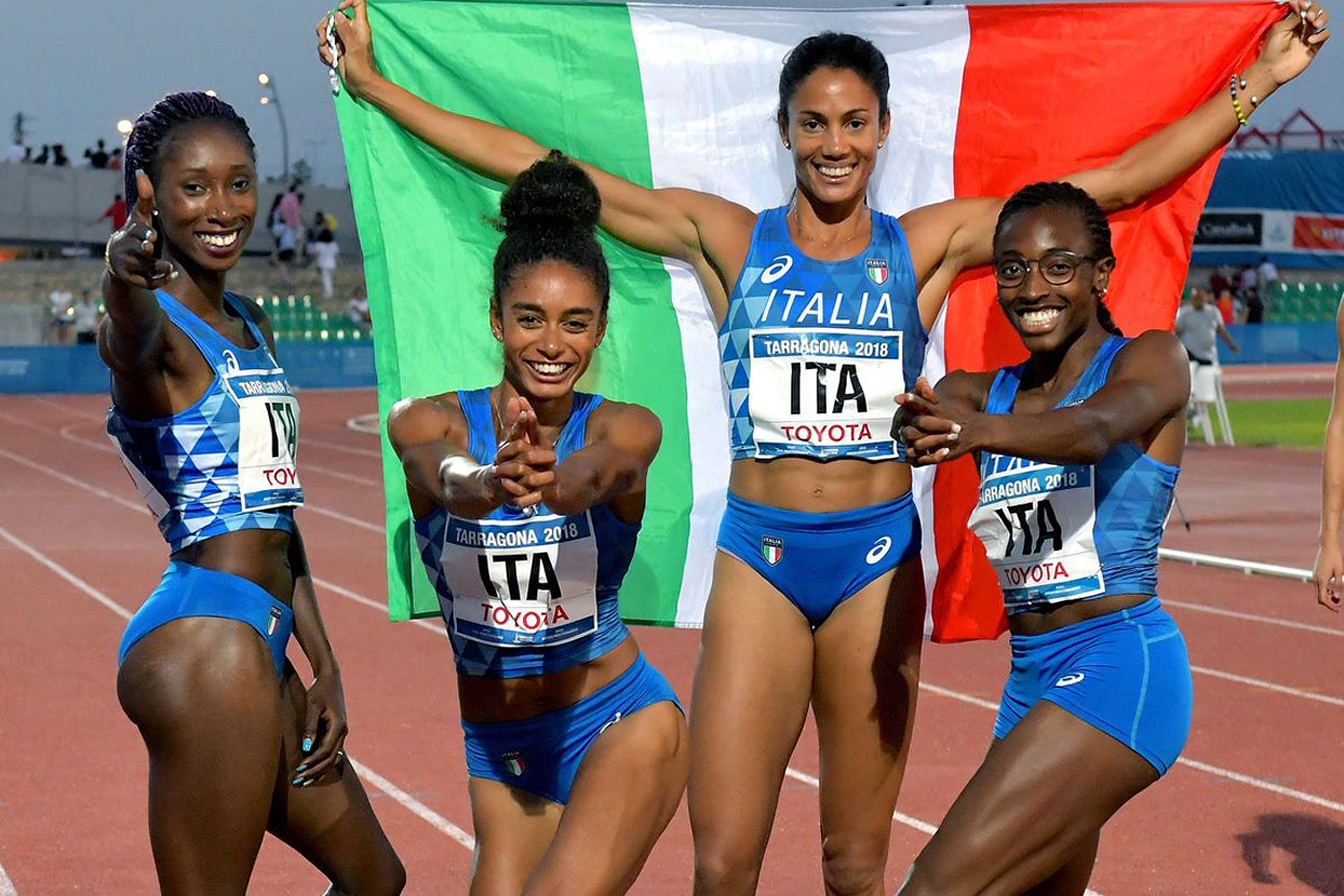 On Zero Discrimination Day, Folorunso’s story is one that could represent so many across the world. She’s an immigrant who arrived in search of a better future; one who, despite the lingering hostility and xenophobia she occasionally encountered, found that the vast majority embraced her as one of their own.

Ayomide grew up in Abeokuta, Nigeria and when she was five, her mother, Mariam, left for Italy, looking to put her master’s degree to use.

“She was young, motivated and thirsty for opportunities,” says Folorunso, who spoke to her mother on the phone every day, but it was three years before they could be together again. In 2004 her mother brought Ayomide to Italy, and her father, Emmanuel, went back and forth between Italy and Nigeria as he juggled his work as a geologist.

Before she arrived in Fidenza, a small town near Parma, Folorunso’s mother had prepared her for what to expect.

“You are different,” she was told. “There’s no avoiding that.”

Folorunso saw what she meant once she got there. She was the only person of colour in her class at school, and drew curious looks every time she walked around the area.

“Now on my street I see more people of colour,” she says. “In 15 years things have changed a lot.”

But rather than take offence to the curiosity of the locals, Folorunso embraced her different appearance.

“I lived it with a badge of honour. I wanted to be different with a positive. Because I am so different, I saw myself as an ambassador. When I went out, (my family’s attitude) was like: whatever you do, it’s like we are doing it.”

She would get strange questions from her peers that ranged from naive to outright racist, but every time she did she thought back to her childhood, and the way she viewed the one white person in her community, the principal of her primary school.

“I was scared because she was so white, so different, so I tried to put myself in other people’s shoes, (realise that) they are scared of me so I made myself approachable. I tried not to get offended with questions, I tried to understand where they’re coming from. They ask me about my hair, my food, my culture, I ask about their blue eyes, their blond hair; it’s normal.”

She counts herself lucky to have arrived at the age she did, when she could integrate far better than older immigrants. Through that period, sport proved a powerful weapon to break down any barriers.

“The games I was playing as a kid in Nigeria were similar to when I arrived in Italy,” she says. “Playing games was another way to learn the language (and the kids realised) if Ayo is part of our team, we have a chance to win in our backyard game. Playing, jumping, running, throwing – everyone can understand them. Sport is the universal language. It’s one of those vital blocks that build the foundation to open up more complicated levels of interaction.”

In her teenage years her talent for sprinting became clear, and Folorunso finished seventh in the 400m hurdles at the 2014 World U20 Championships before winning silver in the same event at the 2015 European U20 Championships, also helping Italy to bronze in the 4x400m.

Back then she remembers looking at the Italian senior team and only seeing one or two people of colour, and almost envying those on British and French teams, where the children of West African immigrants were far more prevalent.

“Most (Nigerian immigrants) went to the UK, Italy is a different story. A lot of people who come to Italy use it as a stopping point, a rest point, before moving on to the UK or other English-speaking countries, but my Mum is not of that mind. She loves it here.”

Her identity, then, remains a blend of both cultures.

“I feel Italian-Nigerian. It looks simple but it’s more complex. When the Italians emigrated to America, they were viewed as immigrants trying to make a better life for themselves, and both cultures have similarities. They have elements of enterprising, they’re hard-working, they don’t give up.”

There is, of course, still a sector of the population that remains opposed to immigration, an attitude generally more prevalent among older citizens.

“They’re people who don’t want change, but even if you don’t want it change is going to happen,” says Folorunso. “There’s a sense of accepting that Italians are becoming different to what we’d always seen and immigrants are not only doing menial jobs, immigrants are not bad people. They’re of substance, they’re qualified, they’re normal people with jobs, with families, and they’re all part of the weave of the society.

“Even if the language is different and their skin colours, they are Italian as well. People sometimes say, ‘oh you speak Italian so well,’ and I’m like, ‘after 20 years I should be able to!’”

Beyond her individual achievements – gold at the 2017 and 2019 World University Games, gold at the 2017 European U23 Championships – Folorunso has been one of the key contributors to the Italian 4x400m team over the years, helping them to a third-place finish at the 2019 World Relays in Yokohama, alongside Chigbolu, Lukudo and Giancarla Trevisan. 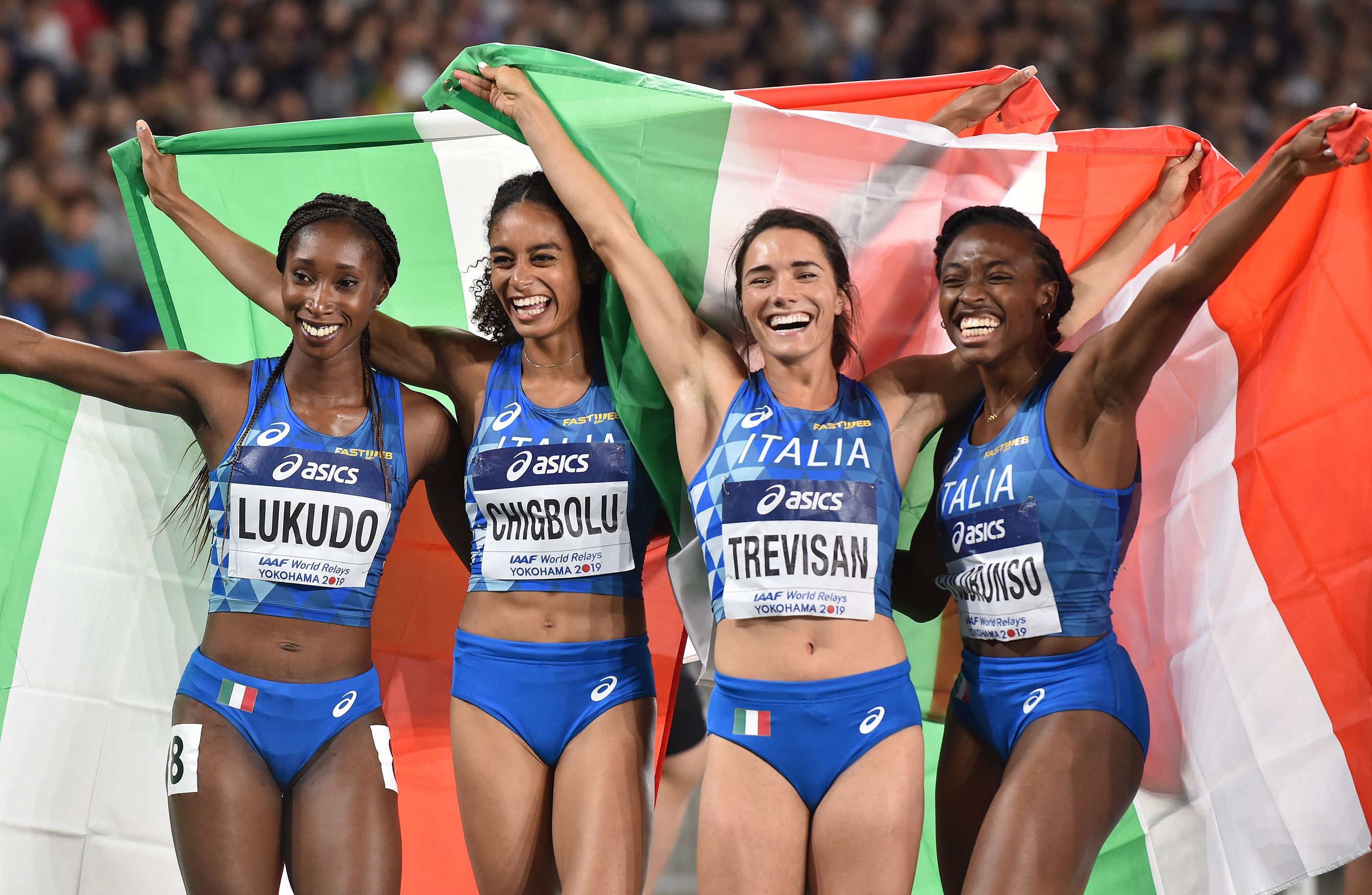 While Folorunso was not picked for the Italian 4x400m squad for this week’s European Indoors after an under-performance at the Italian Indoor Championships, she plans to again be part of the team for the World Athletics Relays Silesia 2021 on 1-2 May.

“There’s been a hundred times I’ve fallen flat on my face, but then you have to stand up and keep pushing,” she says. “We were ousted from the (world 4x400m) final in Doha by 17 hundredths (of a second) so we need to work hard to make sure of (Olympic) qualification. As coaches remind us, we have a long tradition to maintain. The 4x4 is one of the best features of Italian athletics so we feel the pressure in that sense.”

Beyond her athletic ambitions, Ayomide is fascinated by medicine and her long-term goal is to become a paediatric GP.

“You need to catch them young,” she says. “A child that grows up healthy will most likely be a healthy adult so it’s important for children to understand that.”

In her spare time, she also visits schools to talk to the next generation, trying to get across the message that underpins her own story.

“You need to work hard, no one will ever give you anything for free. If you want something to last you have to build it. Everyone wants to be the best, but it is demanding and energy-consuming.”

One thing she’s adamant about is the need for youngsters to see sport as something that benefits academics rather than a distraction.

“Sometimes my Dad told me I’m wasting my time doing sport, to go and study, but parents should encourage their children. Sport and studies shouldn’t be mutually exclusive. If you have a drive to be excellent, you want to be excellent in every area.”

When it comes to tackling discrimination, she’s hopeful about what she hears from the next generation, but believes every part of society has a role to play.

“There are some systematic things we need to eradicate. Social media is good but it’s also very fleeting. The big institutions – the schools, the universities, the government, the radio, TV, Twitter and Instagram – can all accelerate things but you need a good foundation that keeps growing and that comes from the institutions.

“It should be normalised to see different Italians excelling, and it shouldn’t be as a surprise. God has gifted me with a good brain and it doesn’t matter that I’m with colour if I’m a person who respects others, irrespective of if they’re white, black, Chinese, green or blue – that’s something that has to be taught at every level.”

Folorunso’s story is also featured in Viva la Constituzione, which captures the rich culture of the country across a variety of areas, and when youngsters read her tale she they see it as both educational and inspirational.

“I’m a symbol of this cross-contamination of cultures and it’s a privilege and honour,” she says. “That’s something that’s absolutely positive.”

BACK
Pages related to this articleAthletes
Ayomide FOLORUNSO

A Jamaican team of 39 athletes, including multiple global gold medallists Elaine Thompson-Herah and Asafa Powell, has been selected for the World Athletics Relays Silesia 21 on 1-2 May.

Japan has selected a youthful team of 23 athletes to compete at the World Athletics Relays Silesia 21 on 1-2 May.

World 800m bronze medallist Ferguson Rotich is among the 31 athletes named on the Kenyan team for the World Athletics Relays Silesia 21 on 1-2 May.