“Let’s go!” screamed the Colombian crowd, in Spanish, as they watched Natalia Linares do her first jump in the qualification round at the World Athletics U20 Championships Cali 22 on Wednesday (3).

“I enter a bubble, I only listen to my coach and myself,” said Linares, who advanced to the long jump final with the third best mark of the competition.

Before she jumps her routine is always the same: she closes her eyes, takes some deep breaths and puts her faith in a higher power.

Linares is the Colombian hope to win gold in the women’s long jump in Cali and having the chance to do so in front of her home crowd is something she sees as a privilege.

“I think that competing in my country is not a pressure,” the 19-year-old said. “I think that it’s another impulse to do it with a lot of love, a lot of passion and to be able to get the most that I can jump to achieve the biggest number of metres possible.”

After not doing her best at the World Athletics U20 Championships in Nairobi, Kenya, last year, finishing 12th, Linares believes Cali is her second chance.

“I imagine myself on the podium and when I imagine it, I get goosebumps,” she said at the press conference last Saturday.

Linares is second on the world U20 list this year with her Colombian U20 record of 6.68m that won gold at the Bolivarian Games in Linares’ hometown of Valledupar, Colombia, in early July. She also jumped a wind-assisted 6.79m (2.2m/s).

Eight years ago, she didn't know anything about athletics. She didn't even know about track stars like Usain Bolt or Colombian great Caterine Ibarguen – the Olympic triple jump gold medallist in 2016.

But everything changed in a physical education class where Linares’ jumping skills stood out. The teacher set up mats and told the students to run, jump and land on them. Linares let everyone else go first because she didn't know how to do it.

But when she jumped, much to her teacher’s surprise, she went further than any girl or boy in the class. Immediately, the teacher called her mother.

“Do you know how talented your daughter is?” he asked.

“Well, she has a unique talent for jumping.”

That was the beginning of Linares’ athletic journey. In the years that followed, she went through the hands of many coaches, even going to Puerto Rico for three months to train next to Ibarguen, which she said was a great experience that showed her how an Olympic champion trains, thinks and lives.

Because of Ibarguen’s athletic commitments, Linares went back to Colombia and struggled to find a new coach. She thought about retiring, but her mother and brother encouraged her to not abandon the sport.

“They told me that I was crazy if I retired,” she said. 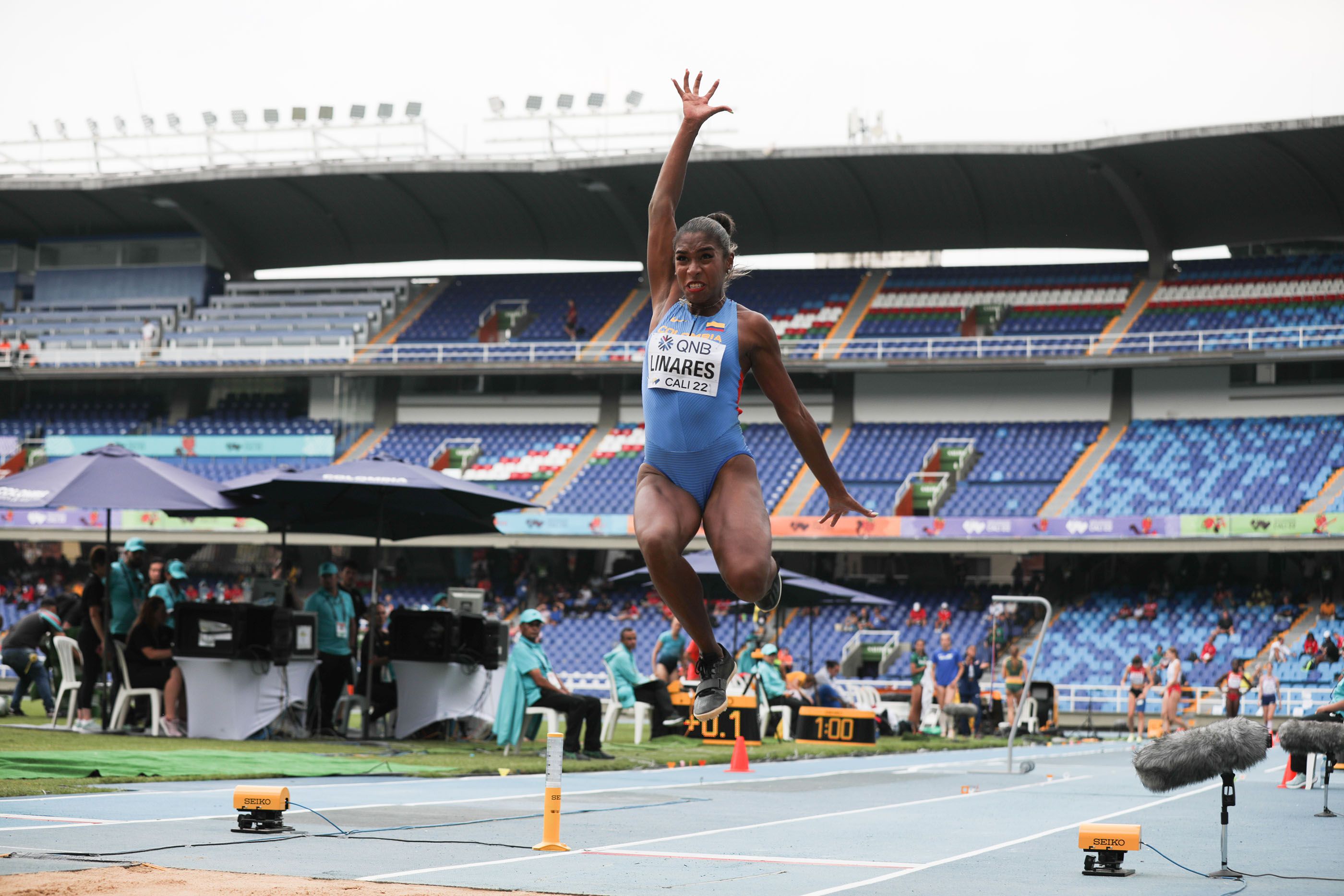 In 2019, she met her current coach, Martin Suarez, who invited her to move to Santa Marta and train with him. At the age of 16, Linares embarked on an adventure, leaving her family and hometown to boost her athletics career.

It was the right decision.

As good as that was, it might only be the beginning.

“I'm very excited to know what the future holds for me,” she said.

Being away from her family makes Linares a vulnerable and sensitive person, according to her coach. “You have to keep your head up,” said Suarez, who has been like a father figure for Linares.

She dreams of being the first Colombian woman to break the seven-metre barrier. With an eye on Paris in 2024, Linares hopes to follow in the footsteps of her compatriot, Ibarguen, and win an Olympic medal.

“I consider myself a dreamer and every dream that I fulfil leads me to a bigger one,” she said.

This year, the goal was always Cali, she said. For the last three years, the championships were all that went through her mind. She wanted to be in her best shape to reach her peak here.

“Maybe many don't trust me, but the person who needs to trust is myself. At the end of the day, my trust has to be set only on me,” said Linares, who feels confident and ready to jump in the women’s long jump final on Friday (5).

Succeeding on the global stage is as much a mental battle as it is physical, and Linares works with a sports psychologist to help her focus during competitions. She says synchronising the heart with the mind makes the perfect combination to achieve her goals.

“God has a miracle for everyone,” she said, “and here I am waiting for mine.”

BACK
Pages related to this articleAthletes
Natalia LINARES