Twenty years on, remembering the 2001 Grand Prix Final in Melbourne

When the IAAF Grand Prix Final came to Melbourne in 2001, it was the one, and only, time the event was contested in the southern hemisphere.

In addition to the substantial prize money on the day, the event was the last chance for athletes to earn points in the overall Grand Prix series. Athletes accumulated points over the full season, with triple points on offer in the final.

In the final overall standings, which incorporated all disciplines, the top three men and women were awarded US$100,000, US$60,000 and US$30,000, respectively. Every athlete who participated in the final came away with a minimum US$1000; larger amounts were on offer for first (US$50,000), second (US$30,000) and third (US$2000) places in each event at the final, with progressively lesser amounts down to eighth place.

Ultimately, the two overall winners were Romanian 1500m runner Violeta Szekely and Swiss 800 star Andre Bucher. For Szekeley, the final was a cakewalk, as she held a decisive lead coming to Melbourne. Bucher, in stark contrast, was in a dogfight with US sprint hurdler Allen Johnson, middle-distance runners Hicham El Guerrouj and Paul Bitok, and long jumper Kevin Dilworth.

Like the cherry on top of a particularly rich chocolate cake, the Grand Prix Final came just two days after the conclusion of the athletics at the Goodwill Games in Brisbane – another event offering rich financial awards. All this booty on offer in Australia followed the 50 kilograms of gold bars distributed via the Golden League, a collaboration of the most prestigious meetings on the European circuit.

Not for nothing did the report in US magazine Track & Field News on the Australian contribution to this largesse appear under the headline: ‘Big Payoffs Down Under’.

That set the scene for Melbourne’s Olympic Park on Sunday morning, 9 September. The final was conducted from 10:30 to 2:45 to avoid a direct clash with an Australian Rules football playoff scheduled for later in the day.

In Melbourne in September, Aussie Rules football is an object moved only once in a lifetime and that one occasion had already been used for the previous year’s Sydney Olympic Games. A morning start it was, then, with temperatures ranging from 13C all the way up to 14C. Winds, fortunately, remained mild.

Kamila Skolimowska and Hicham El Guerrouj bookended the schedule with outstanding performances. Skolimowska, who had won the Olympic gold medal with a world U20 record the previous year while still a couple of months short of 18, made it two from two as a teenager in winning the women’s hammer with another world U20 record of 71.71m. 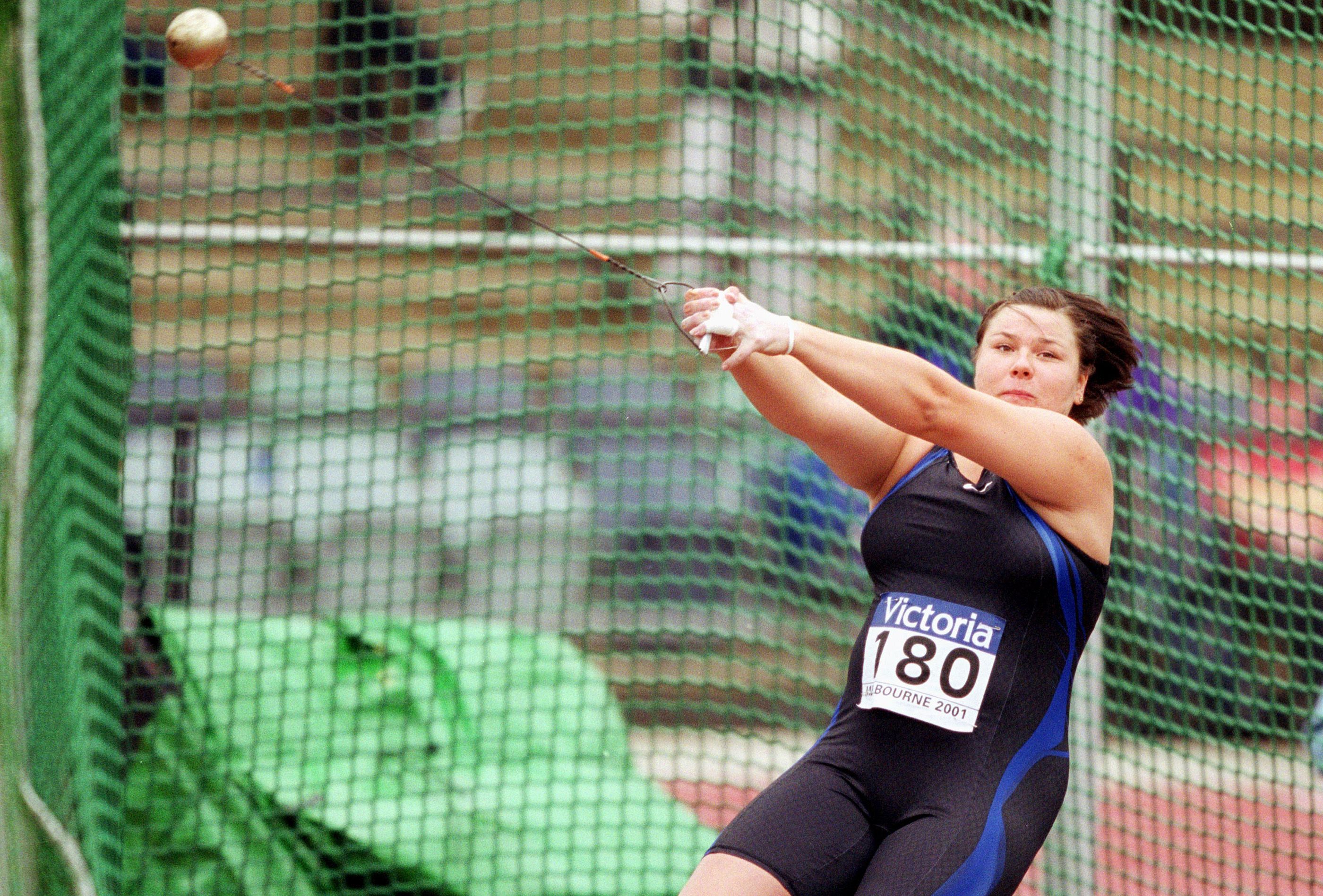 “I think Australia is very good to me,” Skolimowska said, indicating she had mastered not only the hammer but also the Australian tradition of under-statement.

El Guerrouj, pipped at the line by Noah Ngeny in the Olympic 1500m final the year before, extracted some revenge by beating Bernard Lagat, William Chirchir and Ngeny in 3:31.25, breaking Ngeny’s Australian all-comers’ mark. The race was not without controversy, however, with Australian Olympian Kris McCarthy installed as pacemaker – a move which came as a surprise to some of the other finalists.

It may have disadvantaged Paul Bitok who was in contention for the overall prize but did not have a pacemaker in the 3000m.

Such matters were of no concern to Szekely. She came to Melbourne with a comfortable lead in the overall standings, needing only to finish in the top four in the 1500m to guarantee the title.

She won in 4:03.46, almost a full second ahead of Carla Sacramento. To her share of the Golden League jackpot and win in the Goodwill Games, she now added a further US$150,000, becoming the first athlete to earn a million dollars in competition prizemoney in a calendar year. 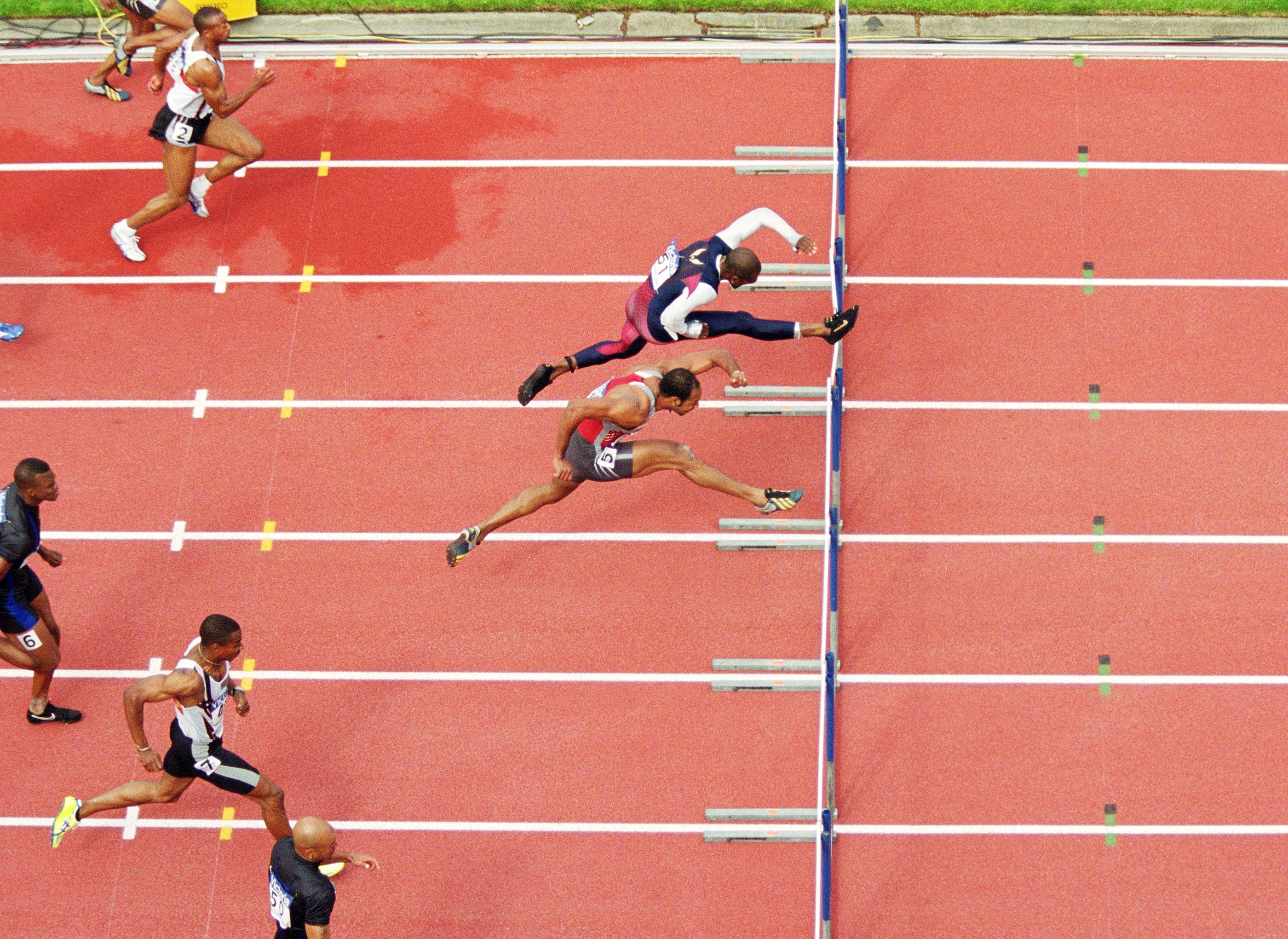 Two of the leading contenders for the men’s overall title put themselves out of the reckoning by their own hand, so to speak. Most surprisingly, one of them was Johnson, who clattered the ninth hurdle to give victory to his close rival Anier Garcia and the overall prize to, well, someone else.

“One hit hurdle too many,” Johnson reflected. “I had the race and totally blew it.”

The other was long jumper Kevin Dilworth, who could finish no better than seventh.

The clock struck twelve noon and Bitok won the 3000m in 7:53.65, pushing his points tally to an even 100. Close, but no cigar: Johnson’s 101 still led the way on the live tally. At least Bitok relegated a young Ethiopian teen named Kenenisa Bekele to second place in 7:54.39. Very few of the world’s best distance runners over the next two decades would be able to emulate that distinction. 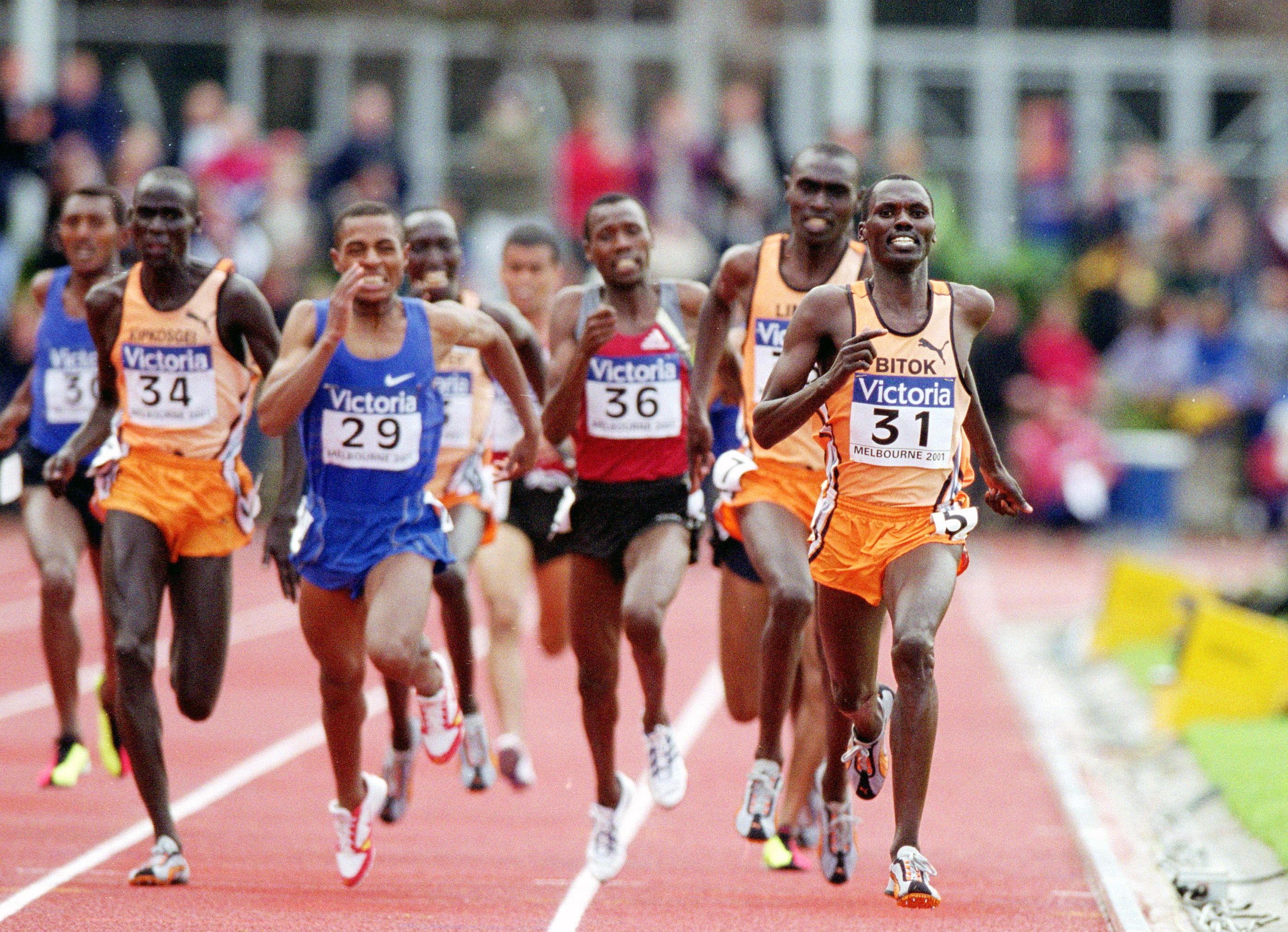 El Guerrouj’s victory in the men’s 1500m closed out the meeting, taking him to 100 points, level with Bitok, one behind Johnson. El Guerrouj beat Bitok for third overall on a countback based on the performance points table to add a little more fuel to the pacing controversy.

In the meantime, however, Bucher had won the 800m and gone to 102 points, an insurmountable lead unless El Geurrouj were to run a world record.

Eschewing his usual hard-paced front-running tactics, Bucher sat in as the first lap went by in a slow 53.46 aiming to lure his main rival, Yuriy Borzakovskiy, into committing first. It was risky given the Russian runner’s powerful finish, but Bucher pulled it off, winning by 0.07 in 1:46.71.

“Both of us sort of changed roles today,” Bucher said. “I stayed back and he started his kick a little earlier. I am glad it all worked out at the end.”

With just two points separating the first four men on the final points table, it was a US$150,000 gamble. But Bucher hit the jackpot to cap a year which brought the World Championships gold medal, a share of the Golden League jackpot and, now, the overall Grand Prix title.

The 2001 IAAF Grand Prix Final sits well in such company.